The bloodshed must halt 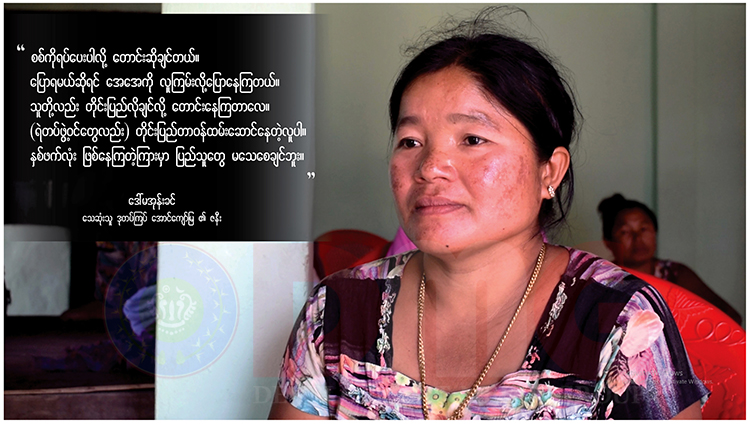 Police members in a compound were gazing at passengers. Some were sitting in a bunker, their eyes moved everywhere.

The ground in the compound was tainted with blood. The place is Yoetayoke police outpost in Ponnagyun Township where few people through it.

The security outpost was attacked by the Arakan Army (AA) on March 9 at around 11 p.m, nine police officers were killed and two were wounded.  An ethnic armed group comprised of about 60 members engaged in a fifty-minute-assault. The AA commandeered some arms and ammunition while the head of the police outpost survived and one member went missing.

Police lance corporal Aung Kyaw Mya, with 20-years’ experience in the police force, was one of the nine dead. He leaves behind his wife with two daughters; the elder is a second-year student in a University and the younger is sitting for matriculation exams.

On a fateful night, gunshot sounds alarmed villagers but they didn’t pursue the cause of gunfire. The wife of Police lance corporal Aung Kyaw Mya figured her husband was safe, but she was seeking a safe haven from the gunfire.

“Everybody was shocked. I was afraid of going outside, so I got into the house to sleep,” said Daw Ma Ohn Khin, wife of police lance corporal Aung Kyaw Mya.

The bullets from the attack shattered glass belonging to some houses near the police outpost. Some residents were hiding under their homes.

“We were scared of the shooting, I couldn’t sleep all night,” a woman who lived near the police outpost recalled.

In the morning, villagers including Aung Kyaw Mya’s mother came and saw the situation in the police outpost. When she saw her son-in-law was dead, she rushed to her daughter and told her the horrible news.

“My mother told me to go to the police outpost to know what was happening because some people were crying there. She first told me my husband was dead,” Daw Ma Ohn Khin said.

At first, the younger daughter did not know about her father’s death because she was sitting for her exam in Kyauktaw town. However, they let her know immediately so she would not have to endure more anguish if she learned about the tragedy latter. So, she returned home for her father’s funeral.

“I don’t want her feeling so grief stricken. They loved each other very, very much, I know how much sorrow she must bear right now. I’m also emotionally torn apart by this but I don’t want her to feel how I feel. I let her know about her father’s funeral,” Daw Ma Ohn Khin said.

Police Lance Corporal Aung Kyaw Mya was buried in the afternoon. But family members could not stay in the cemetery till the end of funeral ceremony. They all had to run and hide in their homes because military helicopters were looming in the sky.

“He wasn’t on the frontlines. He was killed in the police station. So, I am so sad,” Daw Ma Ohn Khin said.

The headquarters of the AA did not give orders to attack the Yoetayoke police outpost. The lower ranked members of the AA made their own decision. So, authorities from their headquarters are investigating its members about the attack.

“We have been informed about the assault. Normally we do not order them to attack police stations in villages. Now we are investigating this case,” AA spokesperson Khaing Thukha told the DMG.

Khaing Thukha predicted that members of the AA might have assaulted the police outpost following the deadly battles with the Tatmadaw on March 9 where they suffered heavy casualties; they might attack the security outpost because the police were under the command of the Tatmadaw. Also, they might take action against some police officers who have been involved in oppressing Rakhine people because the government was using the police force to do so.

During the attack, a policeman went missing. The AA was investigating if its members arrested the police or not, he added.

Police colonel Kyi Lin, head of Rakhine State Police Force, said that they were reconsidering why the AA launched an attack on Yoetayote police outpost, and they thought that the AA might attack the security outpost because they were against the rule of law in the region or they did not want police to serve for regional security.

“The Police is working to enforce the rule of law, not random fighting. So, the enemy can easily attack police. Since they forcefully attacked a small security outpost, it’s likely that they don’t want the rule of law in the region,” said the Rakhine State Police Chief.

In the wake of the AA’s attack on Yoetayoke police outpost, Rakhine State Police Force withdrew police from its remote outposts in Kyauktaw, Minbya, Ponnagyun and Myebon Townships to merge into a stronger force in other police stations.

“We need to take care of security, so we temporary closed our outposts in remote areas and police from these outposts are transferred to other police stations. The number of police in an outpost ranges from 5 to 10. So, we have to consolidate our forces so they’re strong enough to provide security for the region,” police colonel Kyi Lin said.

The AA said that they conducted a counter attack because military troops had been positioned at four security outposts. In spite of being border guard police outposts, some security guards intimidated and persecuted civilians and the Tatmadaw used a large number of troops in launching a fierce attack against the AA.

Currently, the hostility in Rakhine State is intensifying, casualties are increasing and more civilians are being arrested for alleged affiliations with the AA. Meanwhile, tens of thousands of people have been displaced. Thus, Arakanese politicians have urged to cease armed conflicts in the region and to seek a solution at the negotiation table.

“If they reach a mutual understanding, we can find relief. Now, we just hear about the loss of lives very often here. My husband was also killed,” she said.

She knows why armed conflict broke out in the region, but she requested to cease the hostilities between authorities and the ethnic armed group.

“I’d like to request hostilities to cease in our region.  The AA are allegedly the bad guys. But they are fighting for territorial protection of Arakanese people. The police are also working for the country. I do not want people killed during armed conflicts,” she said.