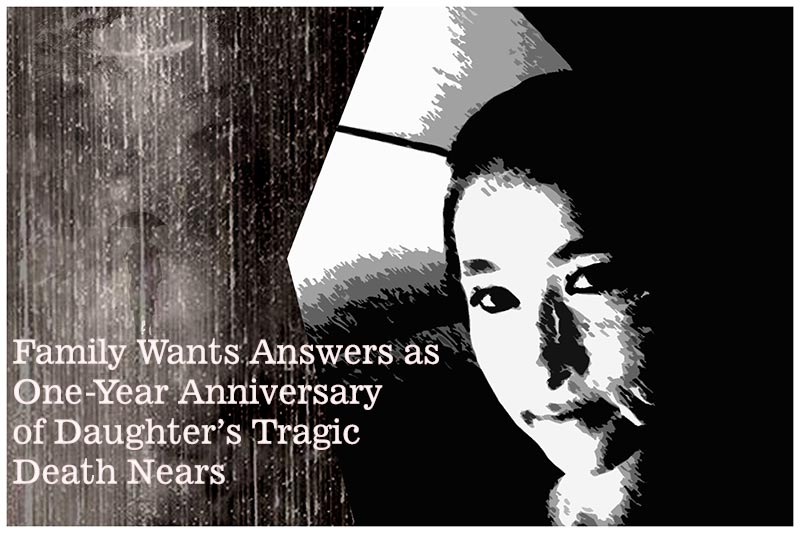 Tragedy struck a family in Sittwe, the capital of Arakan State, when their 12-year-old daughter died under suspicious circumstances in June of last year. Nearly a year later, many may have forgotten the incident, but this nightmare still haunts the family, who are desperate for the truth behind their daughter’s violent death.

Daw Than Than Nu and U Maung Win Htay had three children. Ma Khin Soe Nwe was the middle daughter, and affectionately called May Let Chay.

U Maung Win Htay works as a trishaw driver, but he cannot work every day due to asthma. In order to make ends meet, his wife Daw Than Than Nu makes Burmese donuts, which she sells around town.

May Let Chay was a helpful daughter. At the age of 10, she started helping her family, hawking the Burmese donuts made by her mother. Usually, Daw Than Than Nu made 150 Burmese donuts a day, which were sold for a total of 30,000 kyats.

On weekends when her school was closed, May Let Chay helped her mother selling the Burmese snacks. She would leave her home around noon and arrive back at 4 p.m. The mother and daughter duo sold the snacks in different wards, with the latter taking 50 donuts.

A Tragic Day in June

On June 18, 2020, which was a rainy Thursday, May Let Chay left her home to hawk snacks as usual. Given that her quota was less than half of her mother’s, she usually arrived back earlier than her mother. But she did not come back that evening.

“Every day, she arrived back earlier than me. I would check her tray when I arrived back. That day, I didn’t see her tray and I thought she might be visiting her older sister due to the rain,” said Daw Than Than Nu.

May Let Chay’s older sister was learning tailoring at Magyimyaing ward in Sittwe. Sometimes, she went there and the two sisters went back home together. She phoned her elder daughter and learnt that May Let Chay was not there.

Thereafter the parents went around town in search of their younger daughter, braving heavy rains.

“We looked for her the whole night,” said U Maung Win Htay.

They also filed a missing person report with anti-human trafficking authorities in Sittwe as they were suspicious that she had been abducted by human traffickers.

“We searched for her at the places where she used to sell snacks. But I hadn’t thought that she would end up like that in the town centre,” said Daw Than Than Nu.

Around noon the following day, word spread around town that a community-based humanitarian organisation had brought a girl to the hospital who was found lying unconscious and covered in blood at a new building construction site.

U Maung Win Htay and Daw Than Than Nu rushed to Sittwe Hospital as soon as they heard the news. There they found their daughter with injuries on her face, her head bandaged, and still unconscious.

But things didn’t turn out as she had expected. Around 10 p.m. that night, she was told by the doctor that her daughter was in critical condition. U Maung Win Htay suspected that his daughter had been raped.

Around 6 a.m. on June 20, Daw Than Than Nu heard her daughter grunting. She went out to wash her face so that her daughter did not see her tear-stained face.

“She grunted and I thought she had regained consciousness. So, I went out to wash my face. When I came back, she was already dead.”

Daw Than Than Nu said she feels like their home is empty now with the passing of May Let Chay, who loved to sing and who was the loudest member of the family.

The autopsy report said May Let Chay was not raped and police have opened a case under Section 326 of the Penal Code, causing grievous hurt by dangerous weapons or means. U Maung Win Htay, however, believes his daughter was raped.

“We go to the police station every day to ask about progress in the investigation. They said they are looking for suspects,” said U Maung Win Htay.

Nearly one year after the death of May Let Chay, the family is frustrated that justice still has not been served.

Said Daw Than Than Nu: “We have no more money to bring justice for my daughter.”