A Refuge for the Elderly in Sittwe 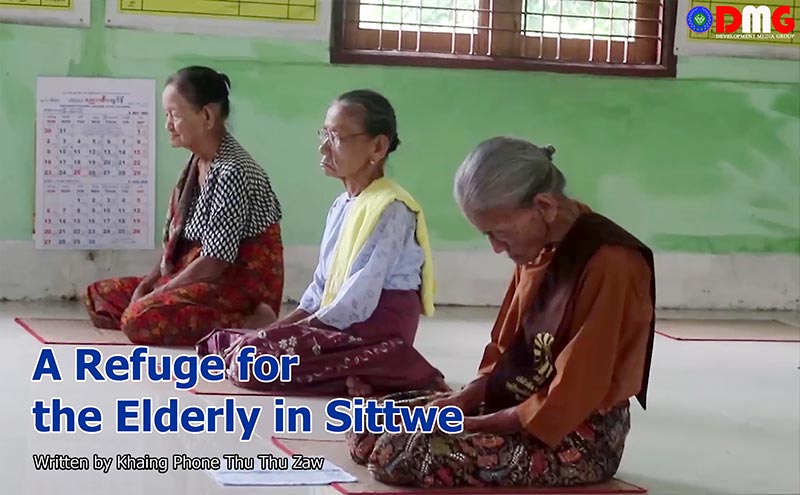 From birth onward, the natural progression to old age, sickness, and death is one of the things that most will inevitably experience. We strive to experience the essence of happiness as we struggle to live a higher standard of life before we die.

In our society, there are many elderly people who have struggled to make ends meet but are able to live happily with their children and grandchildren as they grow older, while others are left without a caregiver and abandoned by their families.

For the latter, the Arakan (Rakhine) State Home for the Aged is also a family-friendly care facility for the sick and elderly who have no one else to care for them for various reasons.

My grandmother, Daw Ma Saw Khaing, is from Sittwe and came here in her 80s. She is now 92 years old. She was married but had no children. The children of Daw Ma Saw Khaing’s husband wanted to take care of her like their mother, but she decided to stay in the home for the aged, thinking of the future.

“I ran a shop in downtown Sittwe before I was 70 years old. I decided to stay in a nursing home because I would not be able to operate these shops when I got older. My husband’s sons and grandsons forbade me to go to a nursing home. But I later thought that they would come here because I was worried that they would become responsible for me. But now they are not abandoning me,” said grandma Daw Ma Saw Khaing.

A total of 42 people — eight elderly men and 34 elderly women, grandpas and grandmas among them — are being treated at the Arakan State Home for the Aged.

“Grandparents are grateful to be able to spend their twilight years here and enjoy life in peace. Healthcare is provided daily by a nurse from 8 a.m. to 12 noon. In addition, doctors and nurses from the Myanmar military visit the nursing home frequently, but medical care is still needed,” said U Phoe Hlaing, in-charge of the Arakan State Home for the Aged.

Elderly people who have taken up residence at the home for the aged say that as they get older, their physical condition weakens.

“My health is deteriorating. My whole body is not good anywhere. I have no place to go, so I have to stay here,” said U Maung Thein Tun, an 81-year-old man from Mrauk-U Township, who is living at the Arakan State Home for the Aged.

The Arakan State Home for the Aged has some donors, but can always use more help.

Daw Hla Yaing Nu, an 83-year-old grandmother who has been living at the home since earlier this year, said she had decided to stay at a nursing home because her husband and her only son had died.

“It has been four years since I lost my only son. My husband died too. I came here because I have no children. I have to live alone at home. When I was not feeling well, I was alone and had health problems. There are a lot of grandmothers like me here. The staff here are also very careful. That’s why I chose this,” she explained.

The elderly, who come to the nursing home for various reasons, including grandparents who have been abandoned by their families due to poor health and lack of family caregivers, are still optimistic and grateful for those who once cared for them.