A Snapshot of Civil War 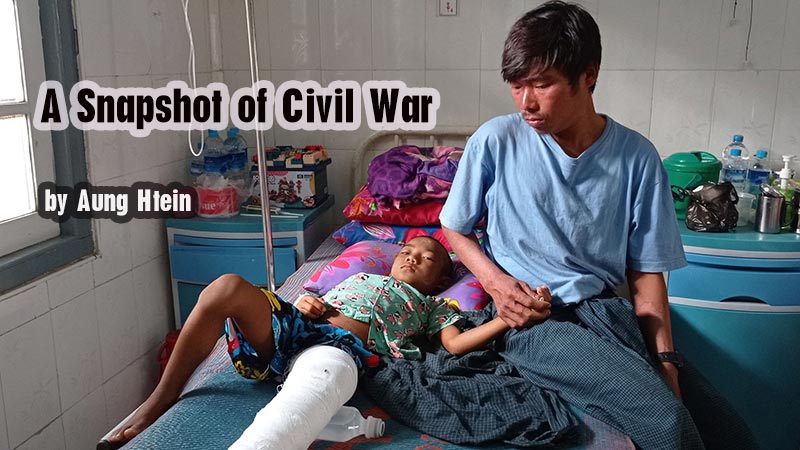 “My wife told me that she did not have her two legs. My second son told me, crying, that he’d lost his legs. My third son is dead,” Ko Oo Maung said of the tragedy that befell his family on April 4, 2021.

A father in his 30s, Ko Oo Maung had three children: the eldest son 7 years old, the second 4 years old and the third 2 years old. They were living at Shwe Pyi village in Kyauktaw Township, Arakan State, when their lives changed forever.

Every day, the couple cooked early in the morning, and arranged food for their three sons and lunch boxes for them to take to school, before these parents left home at around 7 a.m. They’d walk a trip of two hours to forage for vegetables in a forest on a mountainous area outside the village.

Ko Oo Maung would always tell his eldest son that the daily foraging was not a matter of choice, but rather that it was about putting food on the table while he and his two younger siblings went to school.

“I worried that my sons might be bullied or face danger. So, we returned home as early as possible,” he said.

He’d make bunches of vegetables when they arrived back at home and sold them in the village. If he could earn K5,000 or K6,000 in a day, it was enough for the family.

So it was that the husband and wife would forage for vegetables from one mountainside to the next the whole day, every day. Their three sons would wait for their return every afternoon.

“Our sons run to us when they see we are returning home. All our fatigue, after walking in the forest and from one mountain to another, disappears when we see their faces,” he said.

But due to the war, the family’s happiness is gone now. A loud voice followed the blast on the afternoon of April 4, while Ko Oo Maung was making bunches of vegetables. His wife had been breastfeeding their youngest son on the ground under the house, and their two older sons were playing nearby. The scene that Ko Oo Maung witnessed was gruesome.

Ko Oo Maung did not know to whom he should attend first. “I almost went mad because of the situation at that time,” he told DMG.

Both of his wife’s legs were grievously wounded. The eldest son, Mg Wai Yan Lin, sustained injuries to his left leg and back. The second oldest son, Mg Ko Ko Lin, had open wounds to both his legs, and broke his right arm. The youngest son, 2-year-old Mg Kyaw San Win, died on the spot.

His eldest son was initially provided treatment at Kyauktaw Hospital, but he was transferred to Sittwe General Hospital on April 7 due to the severity of his injuries.

Ko Oo Maung did not have time to mourn the loss of his wife and two youngest sons because he was trying to secure medical treatment for his eldest son. And there was also an uncounted fatality — that of his unborn baby. Ma Aye Aye Thein was four months pregnant when she died.

When all was said and done, it was a piece of unexploded ordnance from the two-year-long war in Arakan State that dealt such a cruel blow to this once-happy family. Ko Oo Maung’s two eldest sons found it in the ditch in front of their house while their parents were not at home, and it exploded as they were playing it.

The couple had planned to hold a novitiation ceremony for their oldest son after the monsoon season. Ko Oo Maung’s happiness has evaporated along with his plans for the ceremony.

Displaced Before the Tragedy

In March 2020, the family was displaced from their home during fighting between the Tatmadaw and Arakan Army. They fled and took refuge at Nyaung Chaung and then Maha Myat Muni IDP camps in Kyauktaw Township.

They returned home to Shwe Pyi Kyay village at the end of 2020.

“All of us visited the pagoda. I wished at the pagoda that we could stay together for a long time; to grow old together. I showed my sons how to ring the bell to make a wish at the pagoda,” he said.

That wish did not come true. His wish now is to see landmines and unexploded ordnance (UXO) cleared from the area he still calls home, so that other families are not destroyed in the way that his was.

“Otherwise, poor people will face trouble. I do not want other people to face bad experiences like my family,” he said.

The losses, like Ko Oo Maung’s, from Myanmar’s 70-plus years of civil war can be difficult to quantify.

More than 230,000 people fled their homes during the two-year conflict in Arakan State. Many have returned home as the fighting in the state has halted since October 2020, but more than 100,000 of them still live in IDP camps.

Estimates vary but according to one survey conducted by the Rakhine Ethnics Congress, 49 people were killed and 79 were injured by explosive remnants of war (ERWs), including landmines, since the start of fighting in Arakan State more than two years ago.

Unicef Myanmar on April 6 said one-third of those casualties in Myanmar were children, and most of them were from Arakan State, at 47% of the total.

Ko Oo Maung’s eldest son is a survivor of the conflict. He will resume his elementary school education as soon as the pandemic and Arakan State’s circumstances allow.