Is It Finally Time for the Accused to Return Home? 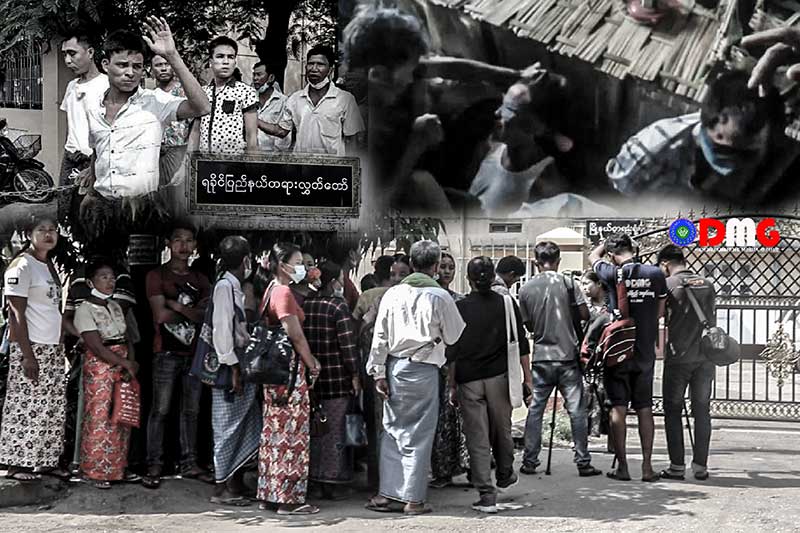 Several middle-aged and elderly women have been seen in front of courthouses across Arakan State over the past three years. Many of them have stood up, sat down, and stared plaintively at various magistrates inside the respective courtrooms, to no avail.

Many of these women are still seen in court every day as the accused — often family and/or loved ones of the defendants — are tried in legal proceedings that are of dubious credibility, at best. In this particular case, the women are the mothers and wives of five Kyaukseik villagers who were arrested on suspicion of having ties to the Arakan Army (AA) and charged under the Counter-Terrorism Law more than two years ago.

More than 200 people were arrested and charged under Myanmar’s Counter-Terrorism Law after being accused of associating with the AA during some two years of fighting in Arakan State from late 2018 to late 2020, according to data from civil society organisations.

In April 2020, the Myanmar military detained 38 residents of Kyaukseik village, including a local administrator. The Tatmadaw released 33 villagers, including the village administrator, the next day but five men — 24-year-olds Ko Nyi Nyi Aung, Ko Aung Myo Lin and Ko Maung Chay, and Ko Min Soe, 38, and Ko Kyaw Win Hein, 22 — remained in military custody on suspicion of having links with the Arakan Army.

A video of the five being interrogated by soldiers on board a boat during their detention spread on social media not long after they were detained. Maj-Gen Zaw Min Tun, a spokesman for the Myanmar military, said that although the soldiers who tortured the five villagers on board were being prosecuted under martial law, it was not yet clear what action would be taken.

“How would a mother feel if her son was beaten to the point of bleeding?” said Daw Ni Ni Aye, the mother of detained Kyaukseik villager Ko Nyi Nyi Aung.

Captain Tint Naing Tun from Ponnagyun-based Light Infantry Battalion No. 550 filed a lawsuit against the five villagers under the Counter-Terrorism Law on April 23. The five Kyaukseik villagers are currently facing trial at the Sittwe Township Court.

“As a mother, I dare to swear that they have nothing to do with the Arakan Army, as alleged by the Myanmar military,” she added.

Five Kyaukseik villagers were arrested and are facing trial from prison; family members are living in fear and are worried about the safety of their loved ones.

There is another case of mass arrest and long-term detention on Arakan Army-related charges in Arakan State. This is the case of more than 20 residents of Lekka village in Mrauk-U Township who were arrested on April 10, 2019, and are still facing trial.

Family members of the deceased did not accept the Myanmar military’s explanation. According to villagers, the Myanmar military claimed that one of the three victims was a drug addict, but residents in the village said the victim didn’t smoke or drink alcohol.

According to Maung Soe Min Oo, who was released, the Tatmadaw and the Arakan Army (AA) fought for several minutes that day near Lekka village, and the villagers were terrified and gathered at the village monastery.

Maung Soe Min Oo said the 27 were tied up with ropes and taken to Light Infantry Battalion (LIB) No. 540 in Mrauk-U, where they were blindfolded and questioned. The 27 Lekka villagers were then airlifted to Sittwe overnight by helicopter from Mrauk-U-based LIB 540. Maung Soe Min Oo said the villagers were interrogated at an army barracks in Sittwe and went hungry for three days during the interrogation.

“On the fourth day of interrogation, I was fed rice without curry,” Maung Soe Min Oo said. “They asked me, ‘Are you from the Arakan Army? What do you do for the Arakan Army? What is your role in the Arakan Army?’ I denied their accusations, saying ‘No’ in reply. The soldiers punched me in the face and beat me on the legs with a small stick. If I cried because I was in so much pain, they would stop beating me. The Myanmar military filed a case against me on suspicion of having links with the Arakan Army.”

The Lekka villagers were arrested in April 2019 and have since been facing multiple charges under the Counter-Terrorism Law, as well as under Section 21(a) of the Arms Act. The villagers have been on trial for well over two years.

Ma Cho Cho Than is struggling to make ends meet, raising her 6-year-old son without the boy’s father, Ko Oo Maung Win, who was arrested along with the other Lekka villagers in April 2019. She currently earns a living as an odd-job worker in order to send her son to school.

“I make a living as an odd-job worker and earn around K3,000 per day. But my income is not enough for us so we are struggling to make ends meet,” she said.

All witnesses in the trial of the Lekka villagers have been examined but a verdict in the terrorism case has yet to be delivered.

The mother of 24-year-old Ko Oo Hla Maung, another Lekka defendant, is still attending her son’s court hearings, hoping for his release despite continuing financial and emotional hardship.

“We have nothing because we have been facing trial since [nearly] three years ago. All our belongings are gone. Now we have to repay around K2 million in debts,” said Daw San Thar Ni, the mother of Ko Oo Hla Maung.

Some prosecution witnesses in the Lekka villagers’ trial did not appear in connection with the case, said U Aung Sit Min, a lawyer with the Min Htee Law Firm.

“I want the authorities to consider strengthening the judiciary and violations of the rights of the accused,” U Aung Sit Min added.

The military council dropped some of the ongoing terrorism cases in Arakan State after it seized power on February 1, 2021.

Marking the sixth anniversary of the signing of the Nationwide Ceasefire Agreement (NCA) on October 15, Myanmar’s military regime announced that it was dropping charges against 114 people arrested on suspicion of having illegal ties to ethnic armed groups, including both NCA signatories and non-signatories. Among the cases closed, there were 61 individuals allegedly tied to the Arakan Army, a non-signatory.

But notable cases, such as the Lekka villagers’ long-running legal limbo, have not yet been dropped. The Arakan State military council has said it will release 36 more people who have been charged under the Counter-Terrorism Law in Arakan State when it receives permission from Myanmar’s Anti-Terrorism Central Committee.

“They will suffer just as we were tortured. The debt is repayable. I will never forget that. We want those who wrongfully arrested and prosecuted us to be punished, whether by law or not,” Maung Soe Min Oo told DMG last year.

At the dawn of 2022, the lingering detainees in Arakan State who were charged for alleged AA affiliations are joined by thousands of others nationwide facing trial for alleged post-coup offences of an ostensibly similar nature.

And thousands of mothers and wives of the accused will remain in the middle of courtrooms across the country, hoping for a better year to come.