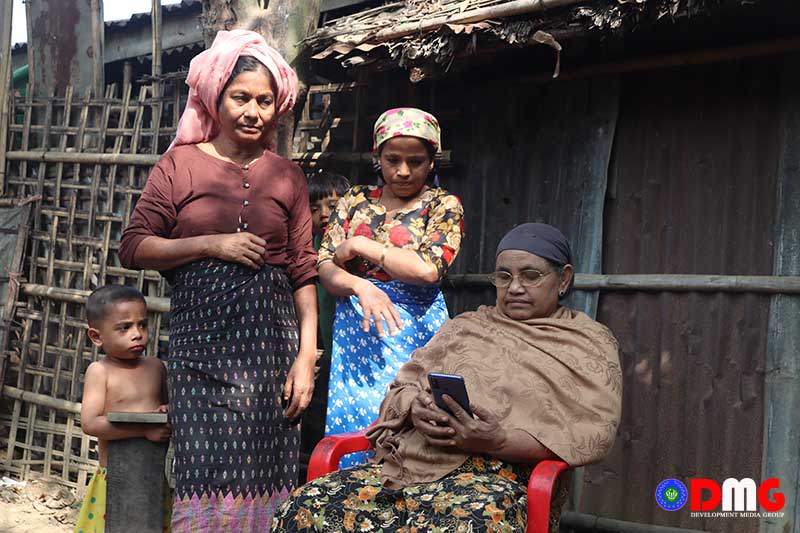 A 75-year-old woman with brown skin and grey hair sits on an old plastic chair and gazes at the nearby row of huts while she basks in the sunshine.

Daw San Phyu (not her real name) is one of the internally displaced people (IDPs) who are sheltering at Thetkel Pyin IDP camp in Sittwe, the Arakan State capital. It has now been almost 10 years that she has been waiting to leave the IDP camp and return to her home village.

“I don’t know exactly when we can return home, and whether I am going to die here or I will make it back there,” said Daw San Phyu.

Daw San Phyu is Kaman, a predominantly Muslim ethnic group that is one of seven ethnicities officially recognised as indigenous to Arakan State. Before arriving at the IDP camp, she lived in Narzi village, Sittwe Township, with eight family members.

In that previous life, Daw San Phyu’s family had business interests and a steady income, not only running a shop in front of their house but also renting some of their land annually. They also earned money selling nipa palm and vegetables.

But on June 12, 2012, Daw San Phyu’s family nest collapsed. Inter-communal conflict in Arakan State was spreading from town to town, and had reached Sittwe. She and her family were forced to flee along with thousands of other Muslims in several villages and towns across Arakan State.

“I don’t know why people were being driven out, but I followed them. I did not have time to take a thing from home. I had to wear clothes given by others,” said Daw San Phyu, who left her home with only the dress she was wearing. 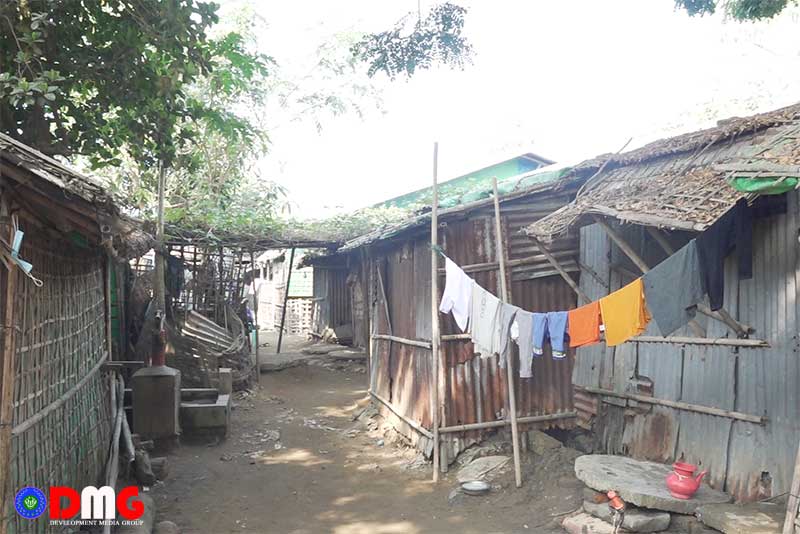 Of the diverse religious and ethnic communities in Arakan State, none was unaffected by the 2012 conflict. Houses, businesses and other properties were damaged and tens of thousands of people were displaced, most of them Muslims.

Daw San Phyu said she misses the era before the 2012 conflict, when Arakanese and Kaman people lived and worked together without any problems.

“We lived happily and peacefully at that time,” she recalls. “We could go anywhere at any time.”

Now, more than 6,600 Muslims, including Kaman families like Daw San Phyu’s own, are living at over 1,000 shelters in Thetkelpyin IDP camp.

The World Food Programme (WFP) provides the IDPs with K16,000 ($9) per person monthly. Some other organisations also provide sanitary pads, soap and other basic necessities. But the material aid does not solve the livelihood, health and social challenges of displaced people in the camps.

“We do not have jobs. We are provided only food. There is not enough to eat, let alone to get medical treatment,” she said.

Many of the Kaman and other Muslim populations in Arakan State face movement restrictions that were imposed nearly a decade ago, in the aftermath of the 2012 violence.

Daw San Phyu said that before arriving at the IDP camp, her people fully enjoyed civil rights such as freedom of residence and freedom of movement. It is not that this septuagenarian has grand ambitions to see the world, travel across the country, or even to visit Arakan State’s other 16 townships.

Annan submitted a report to the NLD administration in 2017, suggesting to resettle the displaced people in their original places of residence and to promote their socioeconomic wellbeing, including by guaranteeing freedom of movement.

Some IDP camps in Kyauktaw and Myebon townships have been closed and their inhabitants have been resettled, giving Daw San Phyu hope that she too will return to her former home someday.

There is also reason for some pessimism: When the military seized power in a coup on February 1, 2021, preparations were being made to shut down the Kyauktalone IDP camp in Arakan State’s Kyaukphyu Township. Due to the military takeover, however, those plans appear to have been put on hold indefinitely. 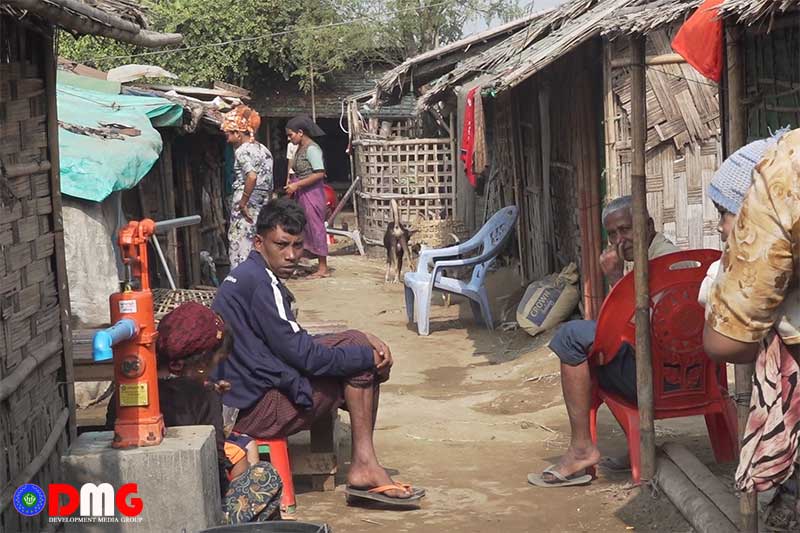 Eleven months after the coup, a handful of cabinet ministers appointed by the junta regime and officials from the Arakan State military government visited and met with displaced people at IDP camps in Sittwe, Pauktaw and Kyaukphyu townships. The ministers reportedly told the IDPs that they are working on resettlement.

Daw Hla Nu (not her real name), a 64-year-old who has been living in an Arakan State IDP camp for almost a decade, doubts that a resettlement effort that fell short under the NLD government has any better chance for success under the military regime, which is currently fighting a multifront war against opponents of its rule.

“Since the regime council is fighting battles, can they really prioritise the return of displaced people in IDP camps?” she asked.

Meanwhile, a series of provocative events in December — including the killing of a civil servant, multiple arson incidents, and attacks on cattle — raised concerns that ethnic tensions could once again lead to violence in Arakan State. Daw Hla Nu, who heard the news from her IDP camp, said she was worried about further communal conflicts.

“I have been living in an IDP camp for 10 years now, even though [the cause of displacement] was only one [ethnic conflict],” she said. “If it happens again, I cannot guess how long people will suffer thereafter.”

At the age of 75, Daw San Phyu tells DMG she is overwhelmed by the desire to resettle in her homeland before she dies.

“When we are able to return home, I will be relaxed on the day we all can live together with our neighbours, who are like our family,” she said.