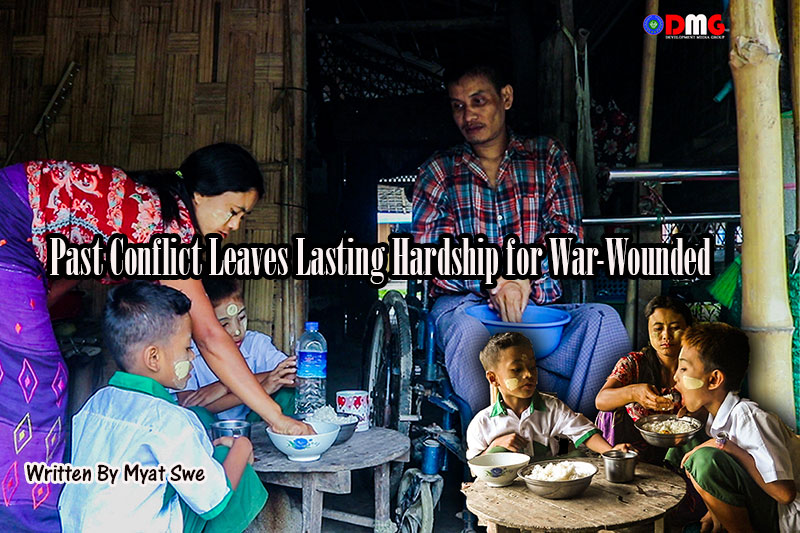 Ko Shwe Tun Thein’s life was turned upside down when his house was hit by an artillery strike in fighting between the Myanmar military and Arakan Army (AA) in 2019.

It was at around midnight on September 16 of that year. AA troops opened fire at two Myanmar Navy vessels sailing along the Kaladan River to transport food supplies to military units in Chin State’s Paletwa Township. The ships fired back, unleashing a burst of artillery shells seemingly at random.

One of those shells was a direct hit on the home of Ko Shwe Tun Thein. He pulled his wife and son close to his chest, shielding them against the attack at the risk of his own life. His son survived unscathed, while his wife sustained minor injuries to her arms and legs. But Ko Shwe Tun Thein himself was soaked in blood.

“I protected my wife and son against the shrapnel from the shell that hit the roof of my house. However, I was hit by shrapnel across the shoulder,” the 38-year-old victim of the 2018-2020 Arakan State conflict recounted.

U Shwe Tun Thein lives with his elderly parents, his wife Ma Khaing Nyo, and two sons in Thinga Nat village, Kyauktaw Township. He made a living farming before he was confined to a wheelchair by the artillery strike that fateful night.

His parents and elder son escaped unharmed as they were able to evacuate their house during the artillery strikes.

A resident was killed and six others were injured in nearby villages including Kan Thone Sint and Sabel Hla following an exchange of fire between the Myanmar military and the AA, which lasted about 30 minutes. At one point, Ko Shwe Tun Thein lost consciousness due to heavy bleeding.

“I was also hit by shrapnel, but I was too numb to feel the pain. My husband told me to flee. He said he could not feel his lower body. He lost consciousness a moment later,” said Ma Khaing Nyo.

Ko Shwe Tun Thein was at Kyauktaw Hospital when he regained consciousness. His lower body was paralysed. He was transferred to Sittwe Hospital, and from there to Yangon General Hospital. He was questioned at military checkpoints along the way.

While he was receiving treatment in Yangon, he was visited daily by Myanmar military personnel. As he began to recover, his family could no longer afford the medical costs, and they had to return to Arakan State. Since then, Ko Shwe Tun Thein has been confined to a wheelchair. With the former breadwinner paralysed, financial hardship has befallen Ko Shwe Tun Thein’s family.

Because Ko Shwe Tun Thein still requires medical treatment and thus must stay near a hospital or other readily available medical care, they live in Sittwe’s Set Yone Su ward, with the help of a relative. They live on relief supplies provided by a displacement camp opened at a Buddhist monastery in the Arakan State capital.

Ko Shwe Tun Thein often despairs, and said he misses the paddy fields where he used to work. He said he has been abandoned by some friends due to his condition. “I am extremely disheartened,” he tells DMG.

He said his wheelchair is old, and needs to be replaced. His condition is such that he has to use adult diapers. He often feels muscular aches and pains, and has to do walking exercises at home to prevent his muscles from atrophying.

Ko Shwe Tun Thein is closely cared for by his wife, Ma Khaing Nyo. She wants to earn money to support the family, but she must also take care of her husband. She has dreams of setting up a shop in front of her home one day.

“I have to take care of him closely. I could not work, and commodity prices were rising, making it difficult for me to make ends meet,” Ma Khaing Nyo explained. Her family property had to be sold off to pay for her husband’s medical treatment and their rising living costs.

As for their two boys, 6-year-old Maung Htein Lin is currently in Grade 1 and 12-year-old Maung Oo Myat Lin is in Grade 6 at a school near their residence in Sittwe. They are still young and — their parents hope — resilient.

From late 2018 to November 2020, sustained conflict raged between the Myanmar military and the Arakan Army in Arakan State and parts of neighbouring Chin State. The fighting left more than 300 innocent civilians dead and nearly 700 injured; hundreds of lives forever changed.

Myanmar’s military and the Arakan Army have largely observed an informal ceasefire since November 2020, but tensions between the two sides have been rising for months, and clashes have flared once again, albeit intermittently for now.

“We want peace because it was the people who were most affected by the fighting,” Ma Khaing Nyo said. She also urged both sides to refrain from targeting civilians in the event that further fighting in Arakan State cannot be avoided.

“Now, my husband has become a disabled person. The husband who cared for us was devastated at a too-early age. I don’t want others to be like him,” she added.

The couple had hoped to novitiate their children. However, their hopes have been dashed as their accumulated wealth has gradually disappeared.

“Before I became a disabled person,” Ko Shwe Tun Thein explains, “I wanted to novitiate my sons as novices in order to repay the debt of gratitude to my parents.”