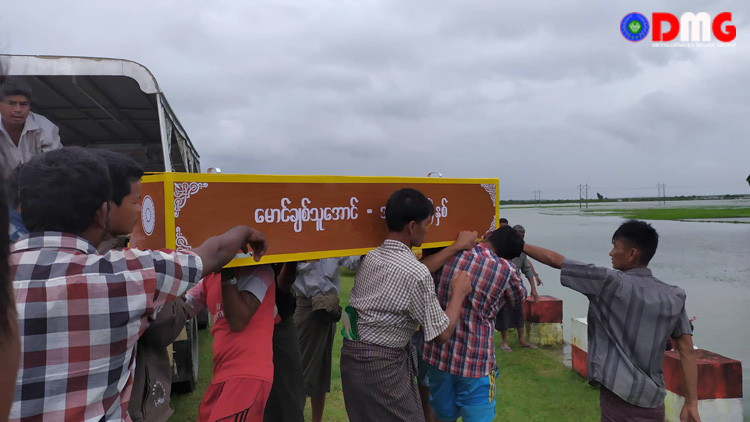 A group of women are sitting on the bamboo floor of a small house with a nipa palm leave roof. They are consoling a 22-year-old girl who is crying, beating her chest in anguish.

The crying woman is Ma Phyo Chay. She is the wife of Ko Chit Thu Aung, 26, who was shot dead by a military troop on Min Chaung Bridge linking between Ponnagyun and Sittwe townships on 1 August.

Ko Chit Thu Aung was from Amyint Gyun village and was working in the XJ crab wholesale center near his village for seven years. He was married to Ma Phyo Chay from Chi Lai Fin village two years ago. He was living in her village.

“We left work together. But, he stayed behind to buy betel quid. The headlight from my motorbike was so powerful that I could see in the distance clearly. I did not see anyone on the bridge. I was suddenly ordered by someone to stop, so I stopped at once,” Ko Zaw Myint Lwin said about the situation some minutes before Ko Chit Thu Aung was shot by soldiers. 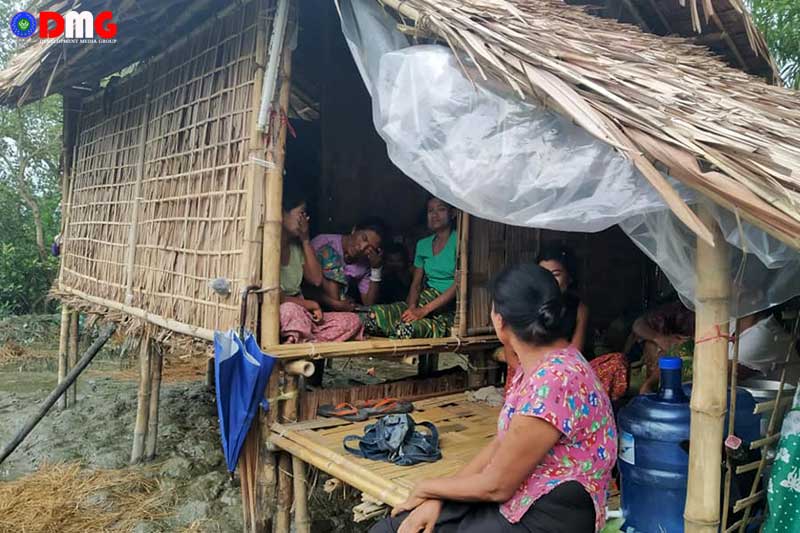 The crab wholesale center they are working at is located in Ponnagyun Township and their village is in Sittwe Township. The trip between their job and home is just a few minutes’ drive. They have to pass the bridge linking the two townships. But, Ponnagyun Township is one of the eight townships with an imposed curfew due to the ongoing skirmishes in Arakan State.

Ko Zaw Myint Lwin said some soldiers from the bridge’s pathway suddenly stopped him when his motorbike reached the bridge.

Ko Chit Thu Aung’s motorcycle has some faults; the headlight is not powerful and it’s difficult to control the brake. He was riding the motorbike at normal speed. When his motorcycle was at the beginning of the bridge, some soldier told him to stop. So, he slowed down the motorcycle a few yards in front of the place Ko Zaw Myint Lwin was checked. He tried to stop the motorbike on one side of the bridge, but a soldier kicked the motorcycle and it nearly overturned. So, he tried to control it but it suddenly moved. That’s why some soldiers shot him. They fired about ten times and he fell on the pathway of the bridge. 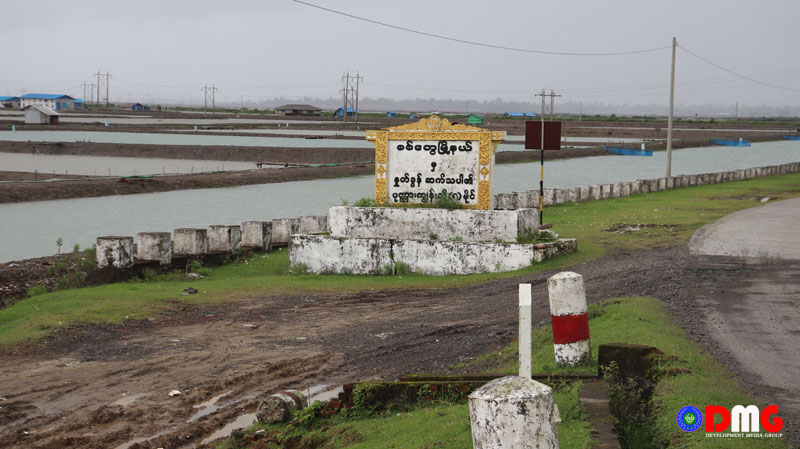 “We always go back home late at night. There are two or three groups on the bridge. They should not have shot at him,” Ko Zaw Myint Lwin said.

Ko Chit Thu Aung is the eldest son of five siblings. He never crossed the bridge alone at night because he was once threatened on the bridge.

In relation to this incident, the Tatmadaw announced that a security force near Min Chaung Bridge arrested suspects who entered Sittwe Township from Ponnagyun Township where a curfew order was imposed.

The security force near the bridge tried to check two motorcycles heading to Sittwe Township late at night on 1 August at about 11 p.m. The man, identified as Zaw Myint Lwin, approved their documents, but another person, identified as Chit Thu Aung, ran away although soldiers warned him, they shot at him as a warning, the Tatmadaw announced.

“I have five children. He is my eldest only one son. I know I could not get back my son. He is a good boy. He never fights with others in the village. I wish others could be careful not to face the same situation like my son,” said Daw Aye Aye Nu, mother of Ko Chit Thu Aung.

Ko Chit Thu Aung was shot dead, but it was not in the area the curfew order has been imposed. If he breached the curfew, he should have action taken against him according to the law, said lawyer U Zaw Zaw Min, an official from Association of Arakanese Human Rights Defenders and Promoters.

“As far as I know he arrived in the area the curfew order has not been imposed. So, we can say he was arbitrarily killed,” the lawyer said.

Random shootings are often reported in Arakan State. Some people have to travel for their business. On 23 July, a 22-year-old man from Taung Myint village received a bullet wound in his head while he was coming to Tin Nyo village with his family. He died at Mrauk-U hospital later.

On the evening of 28 July, Ko Ye Linn Naing from the Plan International was shot by the Tatmadaw while he was travelling in Kyauk Yit Kay ward in Mrauk-U town. He tried to run away when the Tatmadaw stopped him for an inspection, that’s why soldiers fired warning shots at him, Colonel Win Zaw Oo told the DMG.

Meanwhile, unsolved murders occurred in Arakan State. On 5 August, an administrator of Sin Oh Chaing village and two heads of hundred households from Thada Seik village were missing and found with their bodies in a PP-sack. One of them was found tied up. Their bodies had multiple stab wounds.

Before that, two people from Pauk Too Taung village in Myebon Township were brutally killed by a group of people. They shot them and cut their throats.

Local residents are gravely concerned and their trust in security forces is questionable.

Now the rule of law in Arakan State is weaker than it’s ever been. It’s the government’s duty to protect people.  Daw Htoot May, Amyotha Hluttaw representative, said that media should be given access to information about accusations made by both sides during their fighting and media should cover the truth.

“The government is the most responsible party to protect people. But, both armed groups have a responsibility for people affected by the war because they possess weapons and civilians don’t.,” Daw Htoot May said.

Over 60,000 people have now been taking shelter in IDP camps in poor conditions. Meanwhile, people are arbitrarily killed while under suspicion, these actions ramp up the fear factor among the innocent public.

Arakan State is poor. The ongoing war in the region has pushed people into conditions of grinding poverty in addition to instilling people with uncertainty and distress about the future of their lives and their communities.