Wanted: A Chief Minister for Peace 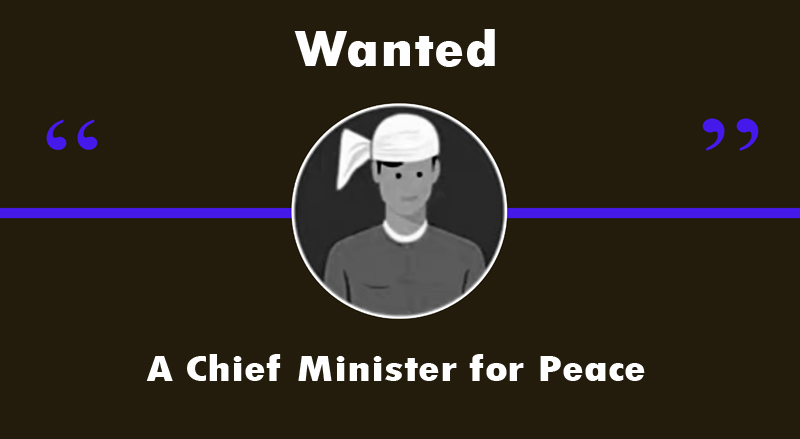 The applicant must be at least 35 years of age. Must be an incoming Arakan State Hluttaw representative as a winner in the November 8 general election. Must be ready to lead from Day One. The emergency issue to be handled as a matter of priority: termination of two years of armed conflict in Arakan State.

The tens of thousands of people forced from their homes by the fighting — and the hundreds of thousands more who, due to the instability, have been frustrated with setbacks in business, education, regional development and countless other aspects of life — are in need of a chief minister to solve these problems.

Estimated at more than 236,000, the internally displaced people (IDPs) cannot yet return to their homes, with fighting between the Tatmadaw and the Arakan Army that began in December 2018 continuing to affect lives and livelihoods in Arakan State.

Because a majority of these people have been living in townships where voting was cancelled in the recent election, they lost their voting rights, on top of the numerous other everyday hardships that accompany displacement. Regardless of this disenfranchisement, the Union Election Commission (UEC) declared that the election had been successfully held, and the election results have been announced and confirmed.

According to the nationwide voting tallies, the incumbent National League for Democracy (NLD) led by Daw Aung San Suu Kyi will again have enough seats to be able to form a government beyond 2020.

The NLD won 258 seats in the Pyithu Hluttaw (Lower House), 138 in the Amyotha Hluttaw (Upper House), 501 in the State/Region Hluttaws and 23 of the ethnic affairs (aka “national races” representatives) constituencies, totaling 920 seats.

With its 396 seats in the Union Parliament (the combined Pyithu and Amyotha Hluttaws), the NLD has won more than the required 322 seats to be able to choose the president and form a government.

The president, in turn, is empowered to submit his or her choices from the lists of elected representatives in the respective state/regional legislatures to serve as chief ministers, who will then shape regional and state governments.

Therefore, under the Constitution, the winning party of elections at the national level has the right not only to form the union government, but also the state and regional governments.

As in other states and regions, the 2015 election-winning NLD appointed party member U Nyi Pu from the ranks of Arakan State Hluttaw MPs to serve as the state’s chief minister.

However, during U Nyi Pu’s five-year term, the state government has not mediated or negotiated to help terminate or alleviate the fighting between the Tatmadaw and the AA. The increasing number of displaced people over the past five years is proof of this.

The number of IDPs statewide surpassed 236,000 this month due to nearly two years of fighting, according to the Rakhine Ethnics Congress, which has been collecting data on IDPs.

As a result of the fighting, about 300 civilians have died and more than 600 have been injured, while arrests on suspicion of Arakan Army affiliation have been frequent occurrences.

The state government has provided compensation of K300,000 ($230) to the families of 132 people who died in the conflict, and K50,000 each for 328 injured civilians, Border Affairs and Security Minister Col. Min Than said during a state Hluttaw session on November 16.

However, Hluttaw MPs have criticised the compensation as inadequate. Arakan people are questioning why the NLD government and the current state chief minister have not made any comment, remaining silent on the hardships being faced by local people.

People are not satisfied with the performance of the Arakan State government and the NLD-appointed chief minister, but their five-year term is nearing its end.

Soon, we will see a chief minister take the helm of state government for the next five years. As was the case five years ago, he or she will be appointed by a president chosen by the NLD, and will then go about forming a new cabinet.

U Nyi Pu has again won an Arakan State Hluttaw seat in Gwa Township, but the NLD has not decided who will be the next chief minister, with party spokesperson Dr. Myo Nyunt declining to say even whether the incumbent is under consideration for the post beyond 2020.

“During this intermediate time, we will have to discuss within our party,” he said.

The NLD has invited 48 ethnic political parties to cooperate with it over the course of the government’s next five-year term. In an open letter sent to the political parties on November 12, the NLD said it hopes its ethnic counterparts will work with it to achieve what it says are shared goals, including the establishment of a federal union.

The Arakan National Party (ANP) won the most seats in the Arakan State Hluttaw, boasting seven of the 15 elected representatives who will take their seats next year.

The NLD came in second, with four Arakan State Hluttaw representatives and the Chin ethnic affairs minister post. Given this situation, in which the ANP will be the predominant political party in the legislature, speculation has turned to whether a Hluttaw representative from the ANP could be appointed chief minister.

Under the current circumstances, political analyst U Than Soe said the NLD will adopt a different approach than in 2015, when the party appointed the Arakan State chief minister with no apparent regard for the opinions of the ANP or other political stakeholders.

“I think the opinions of majority representatives in the Arakan State Hluttaw will be sought and presented to the president to select the chief minister,” he said.

U Than Soe said the appointment of a state chief minister from among the Arakan people, who can take responsibility for peace and development in Arakan State, could come from the ANP.

“If it is offered to the ANP by the NLD, to appoint the chief minister in Arakan State, it will be warmly welcomed,” said Daw Aye Nu Sein, spokesperson for the ANP.

“If we are proposed for the position of chief minister, we will select and assign someone who has strong administrative ability to govern Arakan State very well,” Daw Aye Nu Sein added.

During the 2015 general election, the ANP won 45 seats across the Union Parliament and state legislature, by far the largest number of representatives in the state. The party subsequently demanded that it be allowed to form the state government and choose the chief minister. But the NLD, which won a landslide victory nationally, neglected the ANP’s appeal and gave the chief minister position to one of its members.

This was the NLD’s constitutional prerogative, and the ANP accepts that, but argued that this in fact gave the NLD the flexibility to look at each state and region’s electoral outcome individually. Such an approach in Arakan State, the ANP contended, would justify allowing the dominant party to put forward a name or names, which the president could then formally appoint.

Although the ANP announced that it would stand as an opposition party after its wishes were ignored vis-a-vis the appointment of the chief minister following the 2015 election, that stance only applied for the 2015-2020 period, said the ANP’s Daw Aye Nu Sein.

In the 2010 general election, the Union Solidarity and Development Party won big nationally. At that time, President U Thein Sein appointed a retired colonel, U Hla Maung Tin, a USDP State Hluttaw representative for Ann Township, as chief minister of Arakan State. U Hla Maung Tin resigned on June 20, 2014, and in his place President U Thein Sein appointed Tatmadaw Hluttaw representative U Maung Maung Ohn, a retired major-general.

Political analyst Dr. Aung Myo said the NLD could not realistically propose a Tatmadaw representative to serve as chief minister.

“Tatmadaw representatives will not be selected because the present government is based on a policy to oppose the Tatmadaw’s role in politics,” said Dr. Aung Myo.

And the military’s proxy in electoral politics, the USDP, is also diminished following the 2020 vote, with the party winning only one seat in the Arakan State Hluttaw and one seat in the Pyithu Hluttaw on November 8.

Although it cannot be said exactly from which party or who will be the chief minister of Arakan State beyond 2020, “it requires someone who can do reconciliation among different organisations and [safeguard] minorities’ rights,” said Ko Nyan Kyaw Phyo, a young Muslim from Thandwe.

“We want the kind of chief minister who can reconcile different religions and different people, and someone who can build trust among young people through discussions,” he said.

As for the NLD’s criteria, party spokesperson Dr. Myo Nyunt said: “The person must be able to act for the unity of Arakan people and other ethnic people. And also he must be able to get involved in the interests of the entire nation. These will be taken into consideration.”

Whatever the qualifications may be, Arakan people are hoping to get a chief minister who can mediate and negotiate between the Tatmadaw and the Arakan Army in order to put an end to their conflict as soon as possible.

U Saw Thein, who has been displaced to the Kyauktaw Railway Station IDP camp for the past eight months, is among those wishing for the fighting to stop. His residence was among more than 500 houses burnt down as a consequence of fighting in Tinma village, Kyauktaw Township, in March.

He has not returned to his village since he left eight months ago, and believes that the only chance he has to go back is when the armed conflict between the Tatmadaw and the AA is over.

“We want a chief minister who can create a situation where we can go back to our homes,” U Saw Thein said. “We need someone who can negotiate as much as possible between the AA and the Tatmadaw. Only then will we be able to return home.”