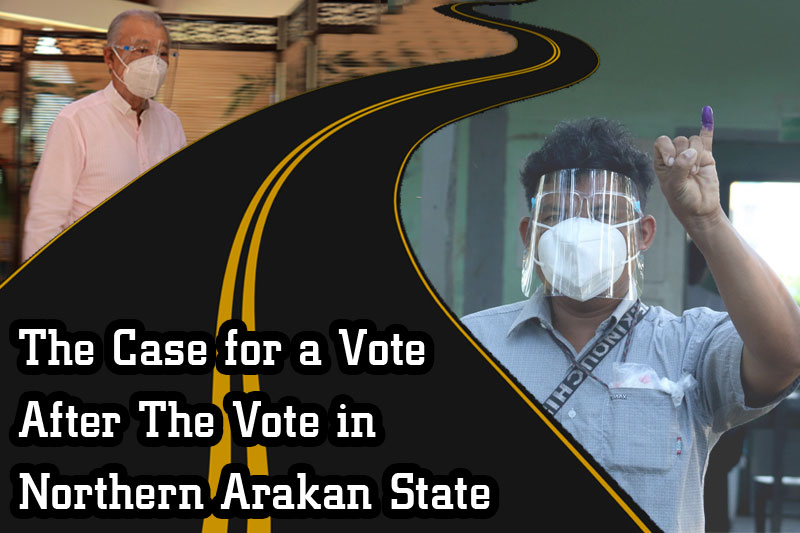 “We have been instructed not to allow reporters access [to the airport] for security reasons,” a police officer said in a harsh tone.

It was around 7 a.m. on November 28, and reporters were gathered at a checkpoint at the entrance to Sittwe Airport in the Arakan State capital as dozens of fully-equipped military personnel and policemen waited in and around the airport.

Two packed military trucks then drove quickly into the airport. At the sound of an airplane landing, security personnel waiting at the checkpoint took positions and journalists readied their cameras.

Yohei Sasakawa, special envoy of the government of Japan for national reconciliation in Myanmar, was visiting Arakan State to see if conditions were suitable for holding elections in nine northern townships where voting in the November 8 general election was cancelled for security reasons.

His visit followed an Arakan Army (AA) statement on November 12 calling on Myanmar’s military and government to hold elections by year’s end in the northern Arakan State constituencies that were denied a vote four days earlier. Within hours of that statement being issued, the military welcomed the AA’s entreaty. Military tensions have since eased significantly in Arakan State, according to local residents and lawmakers.

In a statement on December 2, the Arakan Army provided details of the virtual November 25 meeting, saying the two sides discussed holding elections in Arakan State and enabling the transport of food and medical supplies to villages that have been isolated by clashes. Encouragingly, the armed groups also addressed ways to maintain the mutual understanding they have achieved so far.

Political analyst U Than Soe Naing said elections could conceivably be held in the skipped Arakan State constituencies before the end of December.

“I think there is a possibility of holding elections in Arakan State. The NLD [National League for Democracy] government will not neglect negotiations between the Tatmadaw and Arakan Army with the help of Yohei Sasakawa ... I believe if the NLD government supports the holding of elections in Arakan State, the UEC [Union Election Commission] will also support it,” he said.

More than 1.2 million people are said to have been disenfranchised, at least for now, by the UEC’s October 16 decision to cancel voting in a majority of Arakan State’s constituencies.

Those who have lost their right to vote want make-up elections so that they can have the opportunity to choose representatives to speak on their behalf.

U Khaing Myo Aung, from the Nyaungchaung camp for internally displaced people (IDPs) in Myebon Township, is among those who want elections to be held in Arakan State. He worries that if voting is not ultimately held in areas heretofore passed over, there will be a dearth of parliamentarians to address the plight of IDPs.

“The IDPs and local people will face various hardships if there are no lawmakers who express the voices of the people,” U Khaing Myo Aung explained.

Myanmar’s quinquennial general election was held nationwide on November 8. But with security concerns cited, elections were cancelled in the entireties of nine Arakan State townships, as well as parts of four other townships in the state. Voting was also cancelled in some constituencies of Chin, Kachin, Kayin, Mon and Shan states, and Bago Region.

Out of the nine townships in Arakan State, Sasakawa and his entourage visited Buthidaung and Kyauktaw late last month, speaking to locals who expressed their desire that elections be held.

The Japanese envoy also said he would convey to the UEC his assessment that voting could be held in Arakan State’s previously disenfranchised constituencies.

Meanwhile, there is a whiff of politics and attendant controversy in the air as the NLD appears reluctant to entertain the possibility of timely make-up elections in Arakan State’s north, where history suggests the party would fare poorly against ethnic alternatives on the ballot.

U Than Soe Naing said the NLD appears reluctant to arrange for voting in the cancelled constituencies, anticipating defeat. He said under the circumstances, the UEC should strive to prove its independence by holding make-up elections without taking into account the NLD’s wishes.

Maung Nyar Na, who writes articles on constitutional matters, said the election could be held before Parliament’s third term convenes.

“As the third parliamentary term has not yet begun, other related elections could be held if there is no provision under the electoral law. If the election is postponed due to natural disasters or instability, it could be a follow-up election,” he said, adding that the holding of voting to remedy the omitted constituencies of November 8 would depend on the UEC, the government, the Tatmadaw and ethnic armed groups.

The Japanese special envoy, who met the UEC chairman on December 2 following his trip to Arakan State, expressed disappointment with the commission leader’s response to his suggestion that make-up elections could and should be held soon.

“I personally informed the chairman of the UEC that this situation is good,” Sasakawa told The Irrawaddy, a local news outlet. “But he told me that the voting was cancelled due to the recommendations from the Defense and Home Affairs ministries. But I told him, now the situation has changed. I have personally visited, observed the area and witnessed the situation. However, the UEC did not respond to my request clearly. No answer was given on whether they are going to hold the election.”

Given the signals sent by the Tatmadaw and the Arakan Army — the two most important actors when it comes to questions of regional stability — what is clear is that holding elections in northern Arakan State could bolster prospects for ending the armed conflict there.

All stakeholders should seize this opportunity, as elections offer a peaceful alternative to the guns and bombs that have characterised “politics” in this part of the country for the past two years.

“Fighting between the Tatmadaw and the Arakan Army may resume in Arakan State. We are worried that the armed conflict could break out again if the government does not comply with the AA’s demands” for make-up elections, said U Pe Than, the Lower House MP for Myebon Township.