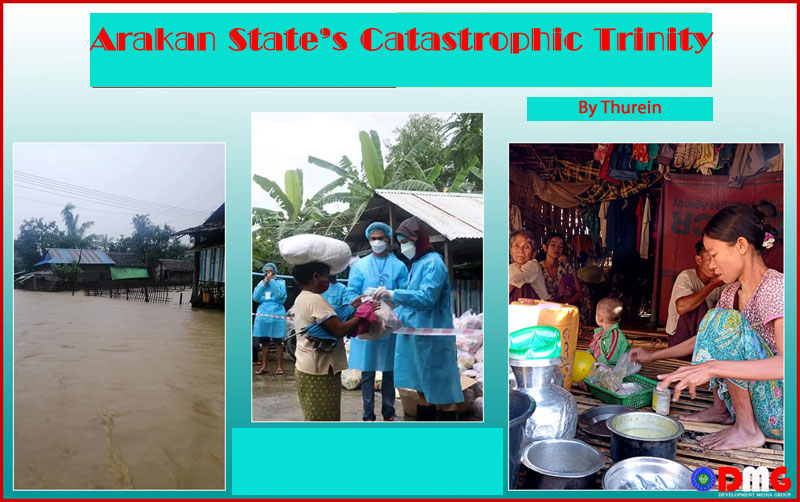 May 18, 2020, was the day the Covid-19 pandemic arrived in Arakan State. A returnee from Thandwe, Arakan State, was found to be diagnosed with the virus.

The first wave of the virus began to spread to other townships in Arakan State in the days and weeks that followed.

At that time, other states and regions in Myanmar were also facing the first wave of Covid-19 and Bangladesh, which borders Arakan State, was also suffering from the pandemic.

But about two months later, Covid-19 returned to Arakan State.

A 26-year-old bank employee in Sittwe was found to be infected with the virus, according to a statement by the Ministry of Health and Sports on August 16 of last year.

Three people tested positive for coronavirus after a contact-tracing process for those who had come in contact with the bank employee was conducted. The second wave of Covid-19 had begun in Arakan State.

There was an increase in the number of cases and this time there were deaths from Covid-19 in Arakan State, but the Arakanese people still exhibited poor compliance with virus preventive measures and most of them lived carelessly.

Arakan State recorded more than 4,200 Covid-19 infections and 37 related deaths in the first and second waves of the virus, according to figures compiled by the Ministry of Health and Sports.

The first and second waves of Covid-19 in Arakan State were not prolonged, but the third wave was not far behind, characterised by the more contagious Delta variant.

The latest outbreak has spread to all 17 townships in Arakan State, and lives are being lost to the virus on a daily basis.

Virtually every facet of the economy, from the flow of goods and services, to farmers’ livelihoods, to the functioning of the banking system, has been negatively impacted by the pandemic’s ongoing third wave. As the flow of goods to and from Arakan State has slowed, commodity prices have risen, leaving average folk struggling to make ends meet.

The United League of Arakan (ULA) has declared a stay-at-home period for Arakan State through August 18 at least, due to ongoing Covid-19 fatalities and infections.

Daw Saw San Nyein Thu, chairperson of the Rakhine Women’s Initiative Organization (RWIO), pointed out that despite the rising death toll from Covid-19, compliance remains a problem. Maskless passersby and other signs of an unserious approach to virus mitigation among members of the public can be seen in many Arakan State cities and villages.

“People are being warned to follow the virus-related regulations and pay more attention to self-protection, but compliance is still weak. In such a weak situation, virus infections spread more quickly,” Daw Saw San Nyein Thu said.

If the public continues to disobey the Covid-19 rules and regulations, it will be impossible to control the pandemic, with potentially unimaginable future consequences.

While the people of Arakan State were suffering the economic and livelihood impacts of the third wave of Covid-19, another catastrophe struck: Relatively low rainfall totals early in the monsoon season gave way to torrential downpours that caused damaging floods in several townships.

More than 750 households and 3,000 people were affected by the flooding in Thandwe Township, which was caused by record-setting rains. More than 40 houses were destroyed.

The Arakan State Administration Council provided K500,000 to each family of flood victims and the Ministry of Social Welfare, Relief and Resettlement supplied K100,000 and a week’s supply of rice for the flood-hit households. Are these provisions sufficient for locals who have suffered a series of disasters, from pandemic to coup to floods?

Four inter-village bridges in northern Maungdaw Township, Arakan State, were damaged by the floodwaters, making it difficult for people from more than 30 villages to travel and access food supplies.

A History of Armed Conflict and Present-Day Realities

In addition to the pandemic and recent flooding, the lingering effects of two years of conflict in Arakan State cannot be overstated.

There have been no clashes for more than nine months, after the Tatmadaw and the Arakan Army (AA) reached an informal ceasefire arrangement.

But more than 100,000 displaced people (IDPs) who have yet to return home are indicative of the scale of the armed conflict and its aftermath.

The problems of food and shelter insecurity for IDPs are no less acute than they were at the height of the conflict. How much more difficult will things get for the displaced if the pandemic, extreme weather events or the continuing political instability worsens?

IDPs say donations and food supplies are less reliable today than they were even just a few months ago.

Ko Khaing Myo Aung, in-charge of Nyaung Chaung IDP camp in Kyauktaw Township, said that if the IDPs there do not receive assistance, food insecurity will increase.

“In our camp, food and drink are very difficult right now because there is no support,” he said. “It has been two months that we’ve not received monthly support from the WFP [World Food Programme]. The camp is facing food shortages because the Ministry of Social Welfare, Relief and Resentment hasn’t provided food to the IDPs regularly. Some IDPs borrow rice from residents in the village.”

At present, there are delays and restrictions on withdrawing money from banks, so it is not always possible to provide regular rations to the IDPs, but the Arakan State Administration Council has claimed that plans are in place to keep food flowing to the IDP camps.

Donors and civil society groups are actively involved in the construction of oxygen plants in several Arakan State townships for Covid-19 patients and others in need, showcasing the resiliency and humanitarian spirit that endure in the face of hardship.

But for the people of Arakan State, the above three catastrophes beg the questions: What will the future hold, and for how long can the bend-but-don’t-break mentality continue to hold in the face of these ongoing challenges?