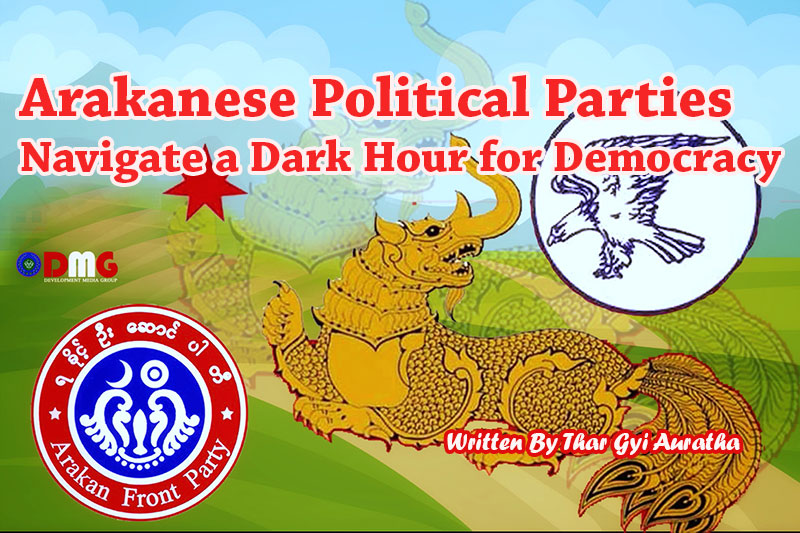 Myanmar’s military seized power from a democratically elected government on February 1, 2021, citing electoral fraud in the 2020 general election as the reason for their coup. More than a year after the takeover, people across the country are still resolutely resisting military rule, demanding a return to democracy.

Some Arakanese political parties have also voiced their opposition to military rule. Political heavyweights including the Arakan National Party (ANP), Arakan Front Party (AFP) and Arakan League for Democracy (ALD) have issued statements based on their stances in response to the coup, but those positions could not be described as uniform.

Five days after the coup, the AFP put out a statement saying it would engage with any organisation in the interests of Arakanese people and domestic peace. AFP spokesman U Kyaw Zaw Oo put it this way: “We must make a realistic assessment of every step of the government that has real influence on the ground, and act accordingly. This does not mean we accept the coup. We mean we have to inevitably engage with it because it has real influence on the ground.”

The ANP also issued a statement but did so much later, on March 22, more than one month after the coup. The party said it would engage with any organisation that acknowledges the national interests of Arakanese people and their right to self-determination and autonomy. By the time the ANP issued that statement, senior party leader Daw Aye Nu Sein had already accepted the junta’s offer to take a seat on the State Administration Council, the governing body of the military regime.

In its statement, the ANP also demanded that the party be allowed to take up the chairmanship of the regime’s Arakan State-level governing body. It also called for the release of all those who were arrested on suspicion of having ties to the Arakan Army. But after the junta refused to meet its demands, the party officially announced, on May 5 of last year, that it had ceased cooperation with the regime.

ANP Chairman U Tha Tun Hla told the media that the party initially cooperated with the regime to serve the national interests of Arakanese people, but decided to go in a different direction as the party determined that this cooperation had failed to serve those interests.

“The party’s Central Executive Committee (CEC) members remarked that the partnership with the SAC should be ended because there is no room to implement the national interests of Arakanese people under the current political situation in Myanmar,” he told reporters at the time.

The post-coup statements of both the ANP and the AFP drew significant criticism among Arakanese communities.

The ALD, in contrast, issued a blunt statement five days after the military takeover, in which the party said it could not accept any form of dictatorship, including the military dictatorship that had seized power.

The ALD said it would accept neither military dictatorship nor democratic dictatorship, and would make continued efforts to establish a genuine federal union in Myanmar.

Military dictatorship in successive periods since independence was the root of grinding poverty in Myanmar and the country’s poor image on the international stage, said the ALD statement.

“As the military dictators only do what they think is good for the country, their policies and plans do not represent the wishes of the majority and people have to suffer negative consequences eventually,” said ALD Chairman U Kyaw Myint.

The ALD also urged the military to solve the electoral disputes peacefully in the interests of the Myanmar people.

“Even if there are huge errors in the voter lists, it is not the collapse of sovereignty or the breakup of the Union. So, we have urged them to settle disputes through negotiations,” he said.

Protests against the military coup have taken place across the country, with some ALD members taking part in anti-junta demonstrations.

As a result, ALD members have been arrested and prosecuted by the military regime. A warrant was issued for the arrest of ALD General Secretary U Myo Kyaw on March 10, 2021, for allegedly participating in the anti-junta civil disobedience movement (CDM).

“As a supporter of the people, I took part in anti-coup activity. The military coup is not in line with the party’s policy. I joined the CDM because I took responsibility for being a politician,” U Myo Kyaw explained.

U Kyaw Kyaw Lin, another ALD member, was arrested for allegedly participating in an anti-coup protest in Taungup, Arakan State, and was charged under Section 505(b) of the Penal Code as well as the Peaceful Assembly and Peaceful Procession Law.

U Myo Kyaw was invited to join the National Unity Government (NUG), a government-in-exile that emerged after the coup and is dominated by the National League for Democracy (NLD), which was ousted from power in the military takeover.

“I was offered a position in the National Unity Government, but I turned it down. I declined after informing the party of the NUG’s offer,” he said.

Explaining his reason for rejecting the NUG offer, U Myo Kyaw said the NLD government, which ruled the country from 2016 to 2021, had presided over “racist” policies in Arakan State. The NLD failed to commit to taking corrective action in this regard when U Myo Kyaw sought assurances to that effect, he added.

The military is currently angling to hold the next election using a Proportional Representation (PR) framework, in contrast to the first-past-the-post system that has been in place since Myanmar’s 2010 general election. The junta has invited more than 90 of the country’s registered political parties to discuss its proposed change to a PR system, holding three meetings with dozens of political parties since May of last year.

U Myo Kyaw said the ALD remains defiantly opposed to the military-led political order that has emerged since February 1, 2021.

“The ALD does not cooperate with any organisation formed by the coup junta. The ALD is still self-reliant,” he said.

No matter their stances, however, Arakan State’s registered political parties have emerged from two years of war and the subsequent coup with diminished influence. On the streets of Sittwe and in rural villages alike, ask many Arakanese and they’ll say their hopes for a better future now rest with the Arakan Army (AA) and its political entity, the United League of Arakan (ULA), which is not registered but is undeniably a political powerhouse these days.