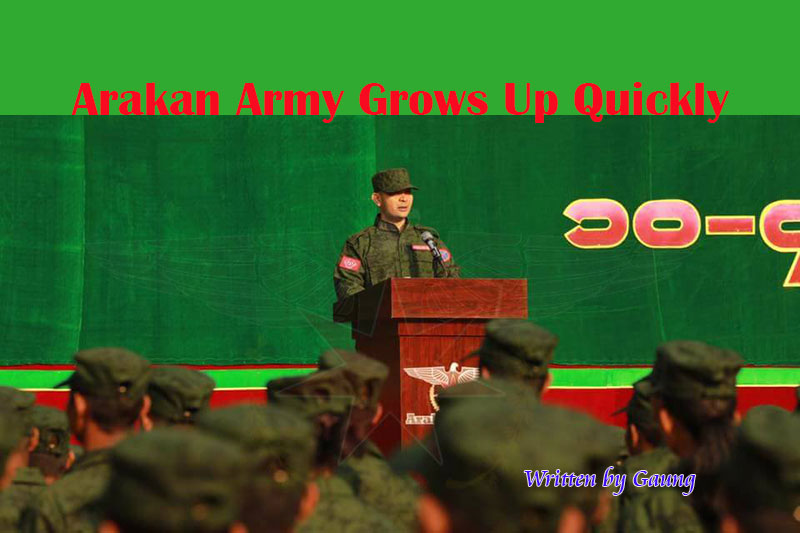 The event marked the birth of a new ethnic armed group known as the Arakan Army (AA) under the leadership of Ko Twan Mrat Naing (who would become Major General Twan Mrat Naing, the AA commander-in-chief) and Dr. Zaw Myo Thet (aka Dr. Nyo Twan Awng).

As a new armed group, the AA was short of almost everything, from food supplies to weapons. It was Peng Jiasheng, the former chairman of the Myanmar National Democratic Alliance Army (MNDAA), who armed the AA, according to Major General Twan Mrat Naing.

“After Chairman Peng Jiasheng gave us 100 guns, we took those 100 guns and two RPGs [rocket-propelled grenades] to fight back to our homeland, Arakan, and it was a crucial moment in our revolution,” he said at a memorial service for the late MNDAA founder on March 29.

AA fighters fought alongside the KIA in the latter’s hostilities with Myanmar’s military in June 2011. It was the AA soldiers’ first combat experience. The armed group then established an alliance with the MNDAA and Ta’ang National Liberation Army (TNLA). It raised its military capabilities and know-how further by joining MNDAA forces in 2015 fighting in the Kokang area of northern Shan State.

Gradually, the AA has grown both in terms of manpower and arsenal, with weapons and ammunition obtained from the KIA and United Wa State Army (UWSA), or black markets along the Thai border and elsewhere.

When ethnic armed organisations (EAOs) were invited to join the Nationwide Ceasefire Agreement (NCA) and engage in political dialogue with the Myanmar government and military, the AA expressed its wish to be part of the process. Myanmar’s military, however, ignored the AA’s request, citing the fact that the group was only formed recently compared with other EAOs, several of which were established around the time of Myanmar’s independence. The AA realised that it had to build its influence if it was to have a say.

At the time, the AA was not as well-known by people. Its popularity, however, grew after an AA delegation led by Dr. Nyo Twan Awng attended the Arakan National Conference held in Kyaukphyu in 2014.

The following year, AA troops began returning to their homeland, building bases in Chin State’s Paletwa Township, which borders Arakan State, and along the India and Bangladesh borders. Sporadic clashes followed in 2016 and 2017 in Ponnagyun Township, Arakan State.

By the end of 2018, clashes had spread to Kyauktaw, Mrauk-U, Buthidaung, Minbya, Ann, Myebon and Taungup, with Myanmar’s military and the AA becoming locked into intense fighting.

In 2019, the AA revealed its “Arakan Dream 2020” to inspire hopes and boost the morale of Arakanese people, who were going through a stormy year.

Many observers at the time believed the AA would be defeated or severely weakened, and sink into obscurity. The National League for Democracy (NLD) government and Myanmar’s military labelled the AA a terrorist organisation, and carried out a large-scale campaign against the group that lasted about two years and involved the army, navy and air force. But the AA showcased impressive guerilla warfare tactics and held its own against the military aggressor.

Some of the major clashes included a 45-day battle at Mee Wa Hill along the border of Kyauktaw and Paletwa townships; the battle at Buddhaw on the Kyauktaw-Ponnagyun border, which lasted nine days; and battles at Kyauktan-Aung Thazi in Rathedaung Township, and Hpar Pyo in Minbya Township.

Strong discipline and combat capability, solid organisational structure, high morale and good military strategies were demonstrated during those clashes, in which the military suffered defeat, according to Arakanese revolutionaries. Another factor was the AA’s comprehensive knowledge of the terrain, which helped the armed group gain the upper hand in its guerilla warfare, said Arakanese revolutionary U Mya Wa, who drew a comparison to another war in Southeast Asia.

“During the Vietnam War, the Vietnamese defeated the US troops with guerilla warfare by making good use of the terrain. The AA generals similarly defeated Myanmar’s military,” U Mya Wa explained.

The AA has established a number of military commands across Arakan State. The group says it has more than 100 battalions, each of which has 300 personnel. If true, that would put the size of the fighting force at more than 30,000 troops. The armed group now has control over more than 60 percent of Arakan State’s territory, according to Major General Twan Mrat Naing.

The Arakan Army provides specialised training such as courses on weapons assembly, paramedical care, advanced martial arts, and sniping. It also runs language proficiency courses covering English, Chinese, Bengali and other languages, so that personnel can engage in international relations and inter-communal outreach.

The AA has created the United League of Arakan (ULA) as its political wing, and also established a separate, parallel administrative and judicial system under what it calls the Arakan People’s Authority (APA). It also formed the Arakan Army Auxiliary (AAA), which is tasked with intelligence and logistics works during wartime and still functions as an important part of the AA.

The Arakanese people understand that a successful armed uprising can liberate them from oppression and help build sovereignty. As a result, there is widespread support for the Arakan Army among the public.

Ko Tun Kyi, who writes articles on Arakanese politics, said: “The Arakan Army has been one of the most successful ethnic armed groups in a short period of time. Another thing is that the Arakan Army is a youth-led group, so the ideas are innovative and high-quality.”

In addition, the AA has strong political aspirations and has the strong support of the Arakanese people for its vision of a confederation or sovereign state, beyond what typical notions of federalism could offer. The Arakan Army has said it will cooperate with the international community to achieve its political goals, and is currently working to cement good relations with neighbouring Bangladesh.

“The Arakan Army has always wanted to see bilateral cooperation with other neighbouring countries, including Bangladesh. Relations between Bangladesh and the Arakan Army are good to some extent,” U Khaing Thukha, a spokesperson for the ethnic armed group, told media at a press conference on April 5. In addition, the Arakan Army has said the group will attempt to build a separate nation in the future, which they say is in line with the Arakanese people’s aspirations.

“The Arakanese people are supporting the Arakan Army as they are working hard for their survival. Arakanese people also admire the AA’s high expectations,” said U Khin Maung Latt, a former Arakan State lawmaker.

The Arakan Army and Myanmar military reached an informal ceasefire arrangement toward the end of 2020, and there have been only a handful of small skirmishes between the two sides since then. The relative stability that has prevailed since late 2020 has allowed the Arakan Army to extend its influence beyond the battlefield.

Some ethnic armed organisations in Myanmar, such as the KIA, UWSA and Karen National Union (KNU), have worked for years to provide many of the services of a government in the areas under their control. The Arakan Army is now doing the same.

The Arakan People’s Authority (APA) has been handling administrative and judicial responsibilities since 2020. The United League of Arakan (ULA) officially announced in August 2021 that all victims of injustice including violence, theft, land issues and other legal matters in Arakan State could seek redress via its fledgling legal system.

“The ULA’s current judiciary is gaining the trust of the people and is at least free of corruption. These are the strengths of the ULA,” said an Arakanese lawyer close to the ULA.

This is a project in which inexperience and public goodwill coexist. Mistakes are sure to be made along the way.

“They have little in the way of pre-training,” explained an Arakanese lawyer close to the ULA, referring to many of those now working within the new legal system.

Although many middle-aged people are involved in the administration and judiciary of the Arakan Army, the ethnic armed group admits that there is still a need for more educated, capable youth.

“We are providing legal training to young people. On the other hand, the inclusion of educated young and middle-aged people in the Arakan Army has not yet reached a level to our satisfaction,” the AA spokesman said.

U Khaing Thukha on April 5 said the ethnic armed group was well over halfway to achieving the “Arakan Dream” articulated in 2019.

“We have reached the stage where the Arakan people’s government is carrying out the process on a daily basis. As a result, the Arakan Army’s target is now more than two-thirds [complete],” he said at the press conference.

The Arakan Army, once a little-known and tiny band of ambitious Arakanese revolutionaries, is today a major player when it comes to regional governance and Myanmar’s peace process. The parallel National Unity Government (NUG) and several ethnic armed organisations were among those sending messages of felicitation to mark the AA’s 13th birthday, an indication of its recognition and stature in the broader conversation about Myanmar’s present and future.

“Self-determination and sovereignty are at the heart of our national movement,” said Major General Twan Mrat Naing. To this end, the AA’s ultimate goal for Arakan State is to create an independent or sovereign territory.

So it is little wonder that April 10, 2022, was celebrated as a day of special significance for the Arakanese people, most of whom have high hopes for the continued success of a remarkable journey now in its 14th year.