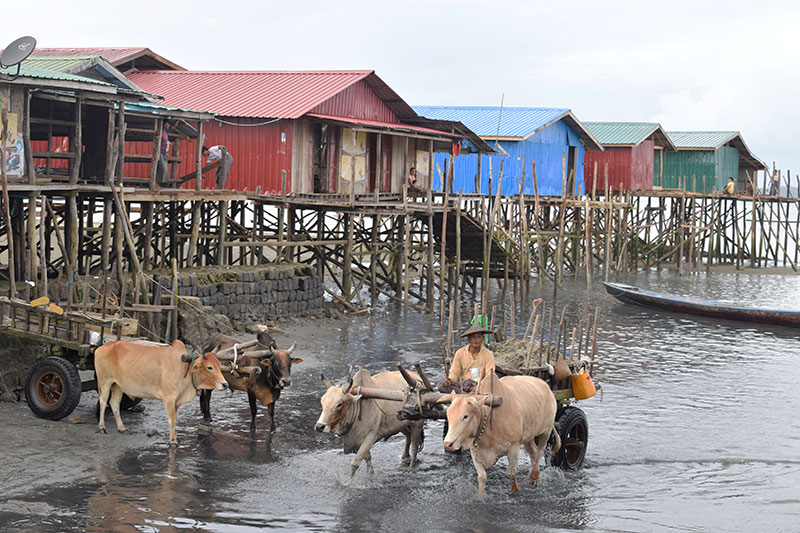 Kyaukphyu Township in Arakan State, which is rich in natural resources, has large gas and oil pipeline projects, but locals have criticised the projects for failing to provide any benefits for them or significant regional development.

A lack of transparency in the natural gas pipeline project built under previous governments and the Maday Island oil pipeline project has resulted in the loss of local fisheries and farmlands.

DMG has previously reported that farmers and landowners were facing the risk of losing their ancestral lands due to the Chinese government’s Kyaukphyu Special Economic Zone (SEZ) project.

During Chinese President Xi Jinping’s visit to Myanmar in early 2020, the two governments signed concession and shareholders’ agreements for the Kyaukphyu SEZ, which is sited along the Arakan State coast and is backed by Beijing. The project is to include a deep-sea port, industrial zone and housing estate, and will use more than 4,200 acres of land.

There were more than 100 acres of land owned by local people among the first tracts of farmland to be confiscated, and additional land claims have subsequently been made. Before implementation of the Kyaukphyu SEZ project began, farmers in the project area wanted to verify their land ownership.

In a statement, the Chinese company said that it believed the Myanmar government would be “transparently accountable,” and that it would work for a fair consensus with local villagers to resolve land confiscation and relocation issues.

The Kyaukphyu SEZ project is primarily in the interests of China and its Yunnan Province, and will allow China to gain access to the Indian Ocean while bypassing the Strait of Malacca.

Ko Maung Maung Than, a local resident, said there was no significant infrastructure development that was of benefit to local residents in the Maday Island area, where Chinese projects and oil ports are being developed, adding that there was no transparency about the Kyaukphyu SEZ project.

“The project on Maday Island has been running for almost 10 years. In the 10 years since the project was launched, there has been no significant change in the infrastructure development of Maday Island,” he told DMG. “It is said that more SEZ projects will be implemented in Kyaukphyu. So far, no one has come and shown it to the locals in a transparent manner.”

Sceptics of the plans for Kyaukphyu are quick to highlight China’s chequered past when it comes to regional development projects, such as in Laos, where an expansive hydropower policy has had significant negative social and environmental impacts.

U Tun Kyi, executive director of the Center for Peace and Development (CPD) in Kyaukphyu, said large-scale investment projects in Myanmar need to provide benefits for the affected regions and their people.

“If large investments are to be made in Myanmar, agreements between the states and the mainland; the benefits for the states; the opportunities that the people of the region deserve, including employment opportunities; environmental and human rights issues; all must be considered in a precise manner,” he said.

In order to continue the Kyaukphyu SEZ project, which is said to be in the interests of the Arakanese people, China and the Chinese state-owned CITIC need to act responsibly rather than hiding behind the Myanmar junta and blaming the regime for shortcomings in implementation.