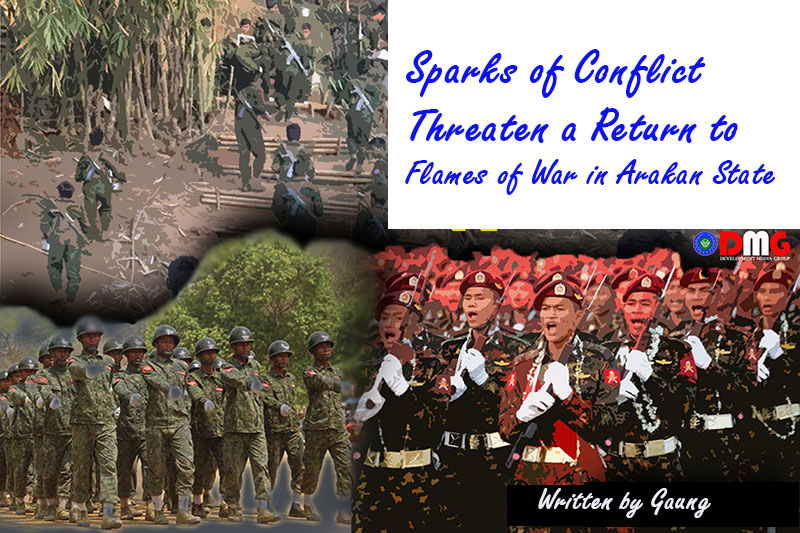 Tensions have been growing lately between the military regime and the Arakan Army (AA) in Arakan State, more than a year after an informal ceasefire between the two sides was reached. On the ground, both sides’ troops have their fingers on the trigger, with their leaders engaged in a war of words.

Junta troops have been searching for officials from the administration of the United League of Arakan (ULA), the Arakan Army’s political wing. The regime has also detained civilians for alleged AA ties, and tightened checks on travellers and goods bound for Arakan State at military checkpoints.

“Ko Htin Latt Oo, don’t go too far. You have been irritating. I won’t give a shit about peace [if you carry on]. I will come to your place and crush it,” AA chief Major-General Twan Mrat Naing warned on Twitter on May 6, addressing the commander of the military’s Western Command. In response, junta spokesman Major-General Zaw Min Tun said the AA’s recent statements seemed intended to provoke a fight.

As Myanmar Rose Up, AA Kept Head Down

The AA has largely stayed clear of the popular armed uprising against the military that followed its coup last year.

With the regime under increasing military pressure from resistance forces collectively known as the People’s Defence Force (PDF) as well as ethnic armed organisations like the Karen National Union (KNU), the AA is again under the spotlight and is widely viewed as a potential game changer in what is known as the anti-coup “Spring Revolution”.

Maj-Gen Zaw Min Tun told the AA not to blame Myanmar’s military if conflict does arise once again in Arakan State and Arakanese people suffer the consequences.

“We are exercising restraint because we don’t want Arakanese people to get into trouble,” said the regime spokesman at a press conference on May 19. “We are exercising patience and tolerance for the sake of the Union and peace. So, don’t blame the Tatmadaw [Myanmar’s military] if something bad happens in response to what is happening.”

AA spokesman U Khaing Thukha countered that Myanmar would have been peaceful long ago if the regime truly cared about people.

“No one believes [the military’s claim] that it is avoiding war for the sake of the people, because the Myanmar military has never taken people into consideration. It is absolute nonsense,” he said.

A Meeting of Significance

It was the first official meeting between the two sides. They did not disclose details about the meeting.

In a brief communique about the meeting, the NUG referred to the “Rakhine people’s government led by the ULA/AA,”  and in its message marking Arakan National Day on May 15, the NUG said “it was sorry for the people in Arakan State affected by military and political conflicts, and vowed to work together with relevant organisations to do justice for them.”

The NUG’s choice of words can be interpreted as it recognising the AA’s presence and status in Arakan State, which is an advantage for the armed group.

The AA has provided military training as well as ammunition for resistance groups including the Bamar People’s Liberation Army (BPLA), and resistance groups in Chin State and Magway Region. Therefore, it appears that the NUG and the AA have established good relations.

Political observers predict that these dynamics could have an impact on the Spring Revolution, possibly leading to a resumption of fighting in Arakan State.

A Shifting but Persisting Civil War

Myanmar has been plagued by civil war since independence, and conflict within the country’s borders is still raging. Successive political leaders have attempted to negotiate internal peace with Myanmar’s ethnic groups and the armed organisations that fight for them, but a lasting peace remains elusive.

The military junta has called 2022 the “Year of Peace” and invited ethnic armed groups to join talks aimed at achieving peace. Among them, the Arakan Army has not attended the peace talks, which were invited by the Myanmar military chief in April, due to the current military tensions in Arakan State.

The virtual meeting between Myanmar’s anti-junta NUG and the ULA/AA on May 16 came after the Arakanese ethnic armed group had warned that clashes could take place at any time in Arakan State due to growing military tensions with the military regime.

Given these circumstances, the meeting was a source of frustration for the military junta, according to ethnic armed group leaders and senior politicians.

For now, the ULA/AA’s decision to meet with the NUG and notably not with the military junta can be seen as a sign of recognition of the NUG. However, the extent of the relationship has not been announced and expectations are not yet high. The NUG may have been able to persuade the AA to become more actively involved in the revolution against military dictatorship, but this remains to be seen.

Nonetheless, the emergence of a revolutionary consensus through the NUG-AA meeting has also sparked enthusiasm from other armed groups.

Amid the forging of a tentative NUG-AA alliance, the military junta is facing another potential front in its ongoing military-political crisis, with the possibility of a resumption of hostilities in Arakan State.

In recent weeks, fighting between the Myanmar military and Arakan Army has been reported in Paletwa Township, Chin State, and the sound of repeated gunfire on May 22 in Ann Township has left locals there on edge.

Continued military meddling in the administrative endeavours of the ULA/AA in Arakan State may prove to be the tipping point.

“The Myanmar military has been cracking down on sources [of AA/ULA authority] such as the AA-run administrative and judicial mechanism, and arresting members of the ULA,” said veteran Arakanese politician U Pe Than. “The Myanmar military is showing signs of escalating tensions and this could lead to [more] clashes between the AA and junta troops.”

While much remains uncertain, this much we know: If the sparks of conflict lead to flames of all-out war in Arakan State, a region haunted by violence will, tragically, face the familiar consequences of displacement, food insecurity and death.