In Arakan and Beyond, Journalism Bent but Not Broken for Post-Coup Myanmar 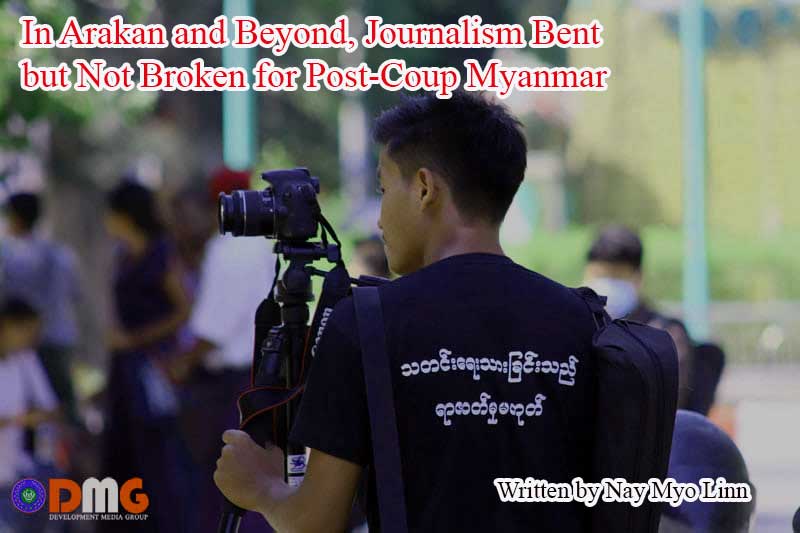 Myanmar’s young democracy vanished abruptly when the military seized power from the elected civilian government in a coup on February 1, 2021. Myanmar people, who were just starting to become familiar with the democratic process, were pushed back into yet another era of dictatorship.

The role of the media, which serves as the eyes and ears of the country, was severely circumscribed following the coup, and journalists were barred from doing their job freely. At least three journalists have been killed since the coup, and independent media now face numerous hurdles.

A few weeks after the coup, the military regime revoked the licences of some independent news outlets. In the 16 months since the coup, it has detained, threatened, imprisoned and issued arrest warrants for journalists in an effort to stifle the media.

Some journalists have gone into hiding and others have reached areas controlled by ethnic armed organisations. Some have fled to the border or assumed the mantle of exile media in foreign countries. From different places and in various ways, they continue to do their jobs, shedding light on the military’s atrocities against Myanmar’s people.

“I appreciate journalists who practise journalism at the risk of being arrested,” said U Myint Kyaw, a veteran journalist.

Athan, an activist group promoting freedom of expression in Myanmar, said on World Press Freedom Day, May 3, that 156 journalists had been detained since last year’s coup. Ninety-five of them were subsequently released, and 61 remain under detention.

The fact that journalists are under siege presents a broader threat to freedom of expression and human rights, Athan correctly notes.

“Under the current situation, not only are the media losing their rights to freely access and distribute information and make reports, but the entire society is losing their fundamental human rights,” Athan said.

Arakan State has been the most stable region in Myanmar since the coup. Clashes have largely ceased in Arakan State since November 2020, after Myanmar’s military and the Arakan Army (AA) reached an unofficial ceasefire, putting a stop to two years of often-intense conflict.

However, residents in Arakan State are also suffering from consequences of the coup, which continue to take a toll on many lives in the state. And the role of the media, a pillar of democracy, has diminished in Arakan State too.

Journalists in Arakan State are not yet being subjected to arbitrary arrests like many of their colleagues in mainland Myanmar. But they are working in fear, and some news agencies are facing serious legal peril.

Arakan State has made headlines in international media due to the Muslim issue and the 2018-2020 conflict between Myanmar’s military and the Arakan Army. There were very real challenges for journalists reporting on these issues long before the February 2021 coup.

Almost five years ago, two Myanmar journalists working for Reuters were arrested for reporting on a military massacre of Muslims in northern Arakan State and were sentenced to seven years in prison before being released in a presidential pardon in May 2019.

More recently, local news outlets including DMG have faced legal persecution for their reporting on the 2018-2020 conflict between the Myanmar military and Arakan Army. DMG chief editor U Aung Marm Oo went into hiding after he was charged under the Unlawful Associations Act in May 2019, and he remains a wanted man. DMG deputy editor-in-charge Ko Ne Win San and female reporter Ma Hnin Nwe have also subsequently faced lawsuits.

Authorities also banned the websites of Arakanese news agencies reporting on the military-AA conflict, including DMG’s English- and Burmese-language URLs.

A veteran journalist based in Sittwe said that even before the military coup, freedom of the press had been hampered in Arakan State by lack of access to information and reporting restrictions. And now?

“Freedom of the press has been eroded by the military junta’s ability to arrest and prosecute any journalist,” the journalist added.

“When reporting about the military junta, I have to think first: If we write this news like this, will we be arrested? After the military coup, the media became more and more in crisis,” said Thinzar Nwe, a reporter from Narinjara, another news outlet based in Arakan State.

Just last month, police and junta personnel raided the Narinjara office in Sittwe, prompting the news outlet to temporarily suspend its operations and send its reporters into hiding.

“As journalists, we are facing fear of what the military council will do to us, even if [what we write] is true,” said Hsaung Zar Chi, who studied journalism at the Myanmar Journalism Institute (MJI).

The military has opened a case against the chief editor and a reporter of Arakan State-based Western News under Section 505(a) of the Penal Code over a report about a white flag being hoisted over a military encampment in neighbouring Chin State. Many of the news agency’s employees have since gone into hiding, fearing potential arrest.

Committed to the public’s right to information, journalists in Myanmar will no doubt continue to write about injustices, hardships wrought by the coup, corruption, and a host of other subjects that may make the rich and powerful uncomfortable. A democratic future requires it.