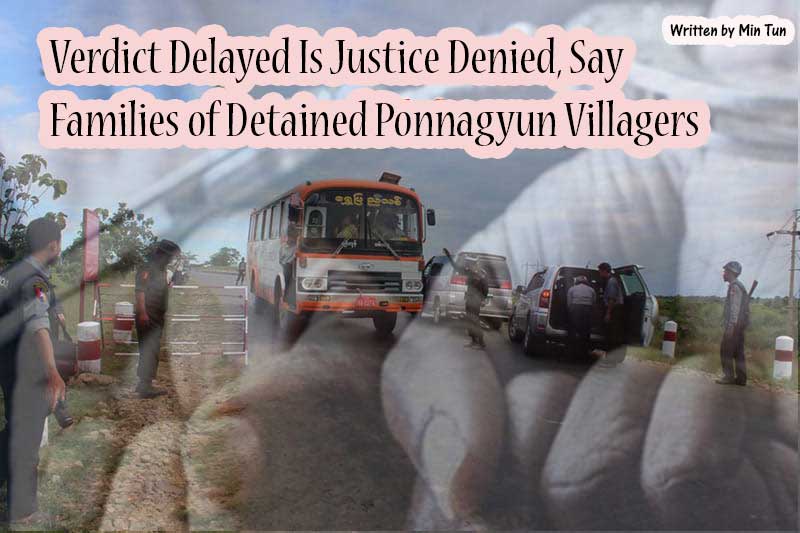 Two residents of Ai Tin village in Ponnagyun Township were arrested at a military checkpoint near Sittwe Township’s Kyauktan village in March 2020, while travelling to the Arakan State capital by motorbike.

The checkpoint, due to its proximity to the village, is known as Kyauktan checkpoint, and most travellers to and from Sittwe pass through it.

Ko Nay Lin Htay, 25, and Ko Maung Saw Aye aka Ko Myo Min Tun, 32, were detained at the checkpoint on suspicion of having ties to the Arakan Army (AA). The two are relatives and their arrest came amid intense fighting between the Myanmar military and the Arakan Army.

The Arakan Army was founded by 26 young Arakanese men on April 10, 2009, in Kachin State’s Laiza, where the Kachin Independence Army is headquartered.

The Arakan Army, which is among the youngest ethnic armed groups in Myanmar, has since built a powerful armed force, which fights for self-determination for the Arakanese people. Its return to its Arakan homeland was followed by sustained conflict with the Myanmar military for about two years, from late 2018 to November 2020, during which hundreds of civilians were arrested and charged under the Counter-Terrorism Law on suspicion of having ties to the AA. The two Ai Tin villagers were among them.

After hearing all witnesses in the trial, the Sittwe District Court scheduled the verdict for April 29, 2021. Nearly 15 months later, the court has yet to deliver that verdict, having put off the ruling numerous times.

To be more precise, the court has delayed the verdict more than 30 times since it was expected in late April 2021, with the latest postponement made on June 30 of this year.

“They have put off the hearing again and again. The trial has been taking place for more than two years. We want the verdict to be delivered,” said 49-year-old Daw Aung Than Nu, the mother of Ko Nay Lin Htay.

She has four children, and Ko Nay Lin Htay is her second son. The poverty-stricken family do casual jobs for a living.

“I’ve missed him a lot over the past two years,” Daw Aung Than Nu said.

Travel costs from Ai Tin village to the Sittwe District Court are severely straining the finances of Daw Aung Than Nu’s family. It costs at least K50,000 to travel to the courthouse and return to the village, and sometimes Daw Aung Than Nu has had to borrow money from her relatives to be able to see her son in court.

“I don’t remember the exact amount of money that I have spent on travel costs. But it has cost me around 2 million kyats,” she said.

Defence lawyer U Kyaw Nyunt Maung said he had seen recorded in the court dossier, with regard to the two defendants, that “upper level authorities have instructed to wait” for instructions on how to sentence the pair. To say their ordeal has not met the requirement for a speedy trial is in understatement, the lawyer notes.

“In my career as a lawyer of more than 20 years, this is the first case I have ever seen in which the verdict has been postponed for more than one year,” said U Kyaw Nyunt Maung.

Delays in the court’s ruling have immeasurably harmed the detainees. Daw Kyawt Sein, a social worker in Sittwe, said the verdict postponements reflected an absence of justice.

“The judge is afraid of the pressure and does not show mercy to the people. The judiciary is no longer upright. Judges will not deliver verdicts against those who are facing trial under pressure,” she added.

The military overthrew Myanmar’s civilian government and seized power on February 1, 2021, on the grounds that the 2020 general election had been marred by fraud.

On March 11 of this year, the junta announced that it was revoking the Arakan Army’s designation as a terrorist group. As a result, the regime has withdrawn some of the cases brought against people who were charged under the Counter-Terrorism Law on suspicion of having illegal ties to the Arakan Army in Arakan State, and released some detainees.

But U Mrat Tun, director of the Arakan Human Rights Defenders and Promoters Association, said the case against the two Ai Tin villagers had not yet been decided by the dictators in power.

“Detainees do not have legal rights. Defendants suffer because they do not have the protection of the law. This is what the dictators do,” he added.

DMG attempted to contact U Hla Thein, a spokesman and attorney-general for the Arakan State military council, to seek comment on criticisms over the prolonged trial of the Ai Tin villagers, but he could not be reached.

More than 200 people were arrested and charged under the Counter-Terrorism Law on suspicion of having ties to the AA during the two years of fighting between Myanmar’s military and the ethnic armed group in Arakan State, according to data compiled by local civil society organisations. More than 70 people in Arakan State are currently facing trial and remain behind bars in various prisons for alleged AA ties.

Daw Aung Than Nu from Ai Tin village said her worries would be eased only if her son is released.