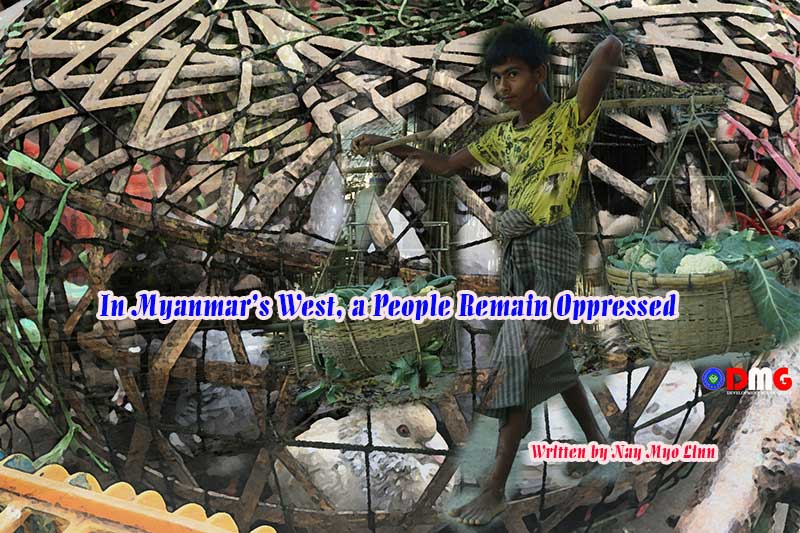 Located in western Myanmar, Arakan State is a picturesque region of mountains, forests, rivers, pagodas, and abundant natural resources. To many outsiders, the state would appear to be a desirable place to live, but there are local people who long to escape from these coastal lands after being effectively caged here for a decade.

Denied education, economic opportunities and basic human rights, many have tried escaping to other places, but mostly those who attempt to leave end up behind bars. Others have died during attempted exoduses. Only a relative few have managed to escape. This is the harsh reality for Muslims in Arakan State.

Muslim and Arakanese people have shown over the decades that they can coexist peacefully in Arakan State, and indeed they have done so for the vast majority of their time living together in western Myanmar. The religious and racial strife of 2012, however, turned many people’s lives upside down. Both communities suffered casualties, both sides lost homes and businesses, and more than 100,000 people were displaced. In the aftermath of that trauma, intercommunal relations soured, and suspicions and hatred grew.

While Muslims at displacement camps (described by some as de facto internment camps) have arguably suffered worst of all, their fellow Muslims have also faced tough restrictions since the 2012 troubles, losing access to schooling, medical treatment and full freedom of movement.

Since the conflict, Muslims have been barred from travelling unless they have citizenship IDs. Most of them do not have this essential form of identification, in which case they have to apply for Form (4), a document issued by authorities for travel within Arakan State.

Making matters worse, authorities deployed heavy security in and around displacement camps and Muslim villages, making it difficult for Muslims to even receive medical treatment.

Ko Maung Hla, who now lives in Sittwe’s Aung Mingalar ward, says that although he was born in Arakan State, he is not happy anymore living in the state and wants to find new, hopefully greener pastures elsewhere. (Ko Maung Hla is not his real name.)

Arakan State is the second poorest state in Myanmar, with very limited job opportunities. Arakanese people therefore often seek work abroad, or in large Myanmar cities like Yangon and Mandalay. Muslims, however, can’t do so. They are barred from leaving Arakan State, and those who try to leave are arrested and locked up by authorities if caught.

Like almost everyone in the country, Ko Maung Hla is hurting from the post-coup economic turmoil and rising costs of living. He says he’d like to work abroad, but knows he would be taking a risk by attempting to do so.

“Of course, I wouldn’t need to leave Arakan State if I could make a decent living here. But job opportunities are extremely limited here. Sometimes, I want to work outside the country. But I dare not for fear that I might get arrested,” he tells DMG.

Ko Maung Hla has good reason to be afraid: There have been numerous examples of Muslims being prosecuted for illegally leaving Arakan State. In November of last year, 102 Muslims who tried to leave Arakan State by boat were detained near Sittwe, and were subsequently sentenced to five years in prison by the Maungdaw District Court under immigration law.

More recently — and tragically — a boat carrying about 90 Muslims sank in a storm in the Bay of Bengal on May 21, leaving 14 bodies dead on the shores of Shwe Thaungyan Beach in Ayeyarwady Region, according to RFA, which also reported that 20 survivors were arrested. These are just two obvious examples, and there are many such cases.

Economic Hardship Hits Harder Without an Out

Ko Kyaw Thu (also a pseudonym), a Muslim resident of Phonnyolaeik village in Buthidaung Township, earns a living as a farmer. But rising commodity prices since the military coup have also affected his livelihood. He said soaring fuel and fertiliser prices have made it difficult to farm.

Ko Kyaw Thu added that local people dare not go to nearby forests to collect firewood or forage for vegetables due to the risks of explosive remnants of war (ERWs) and landmines, which were left in the wake of fierce clashes between the Myanmar military and Arakan Army from 2018-2020.

“I want to go abroad due to the scarcity of jobs in Arakan State. I dare not go abroad because I don’t have my own ID card,” he explained.

The Arakan Army and its political wing, the United League of Arakan (ULA), have been working to reconcile the Arakanese and Muslim communities in Arakan State in recent years. Interfaith events and conversations that would not have taken place five years ago are now happening.

Travel restrictions have eased for some, but this typically only applies to Muslims looking to move between townships, or even simply within townships. True freedom of movement remains a distant hope, or so it seems anyway.

For now, arrest followed by criminal prosecution remains the most likely outcome for any Muslim who dares to venture beyond the confines established in Arakan State following the upheaval of 2012.

“The prohibition on Muslims’ freedom of movement,” said U Aung Khin, a Muslim translator and author, “is similar to the fact that during World War II, the Nazis arrested Jews, kept them in concentration camps, left them malnourished, and allowed them to die.”