A Second Ceasefire on the Arakan Front 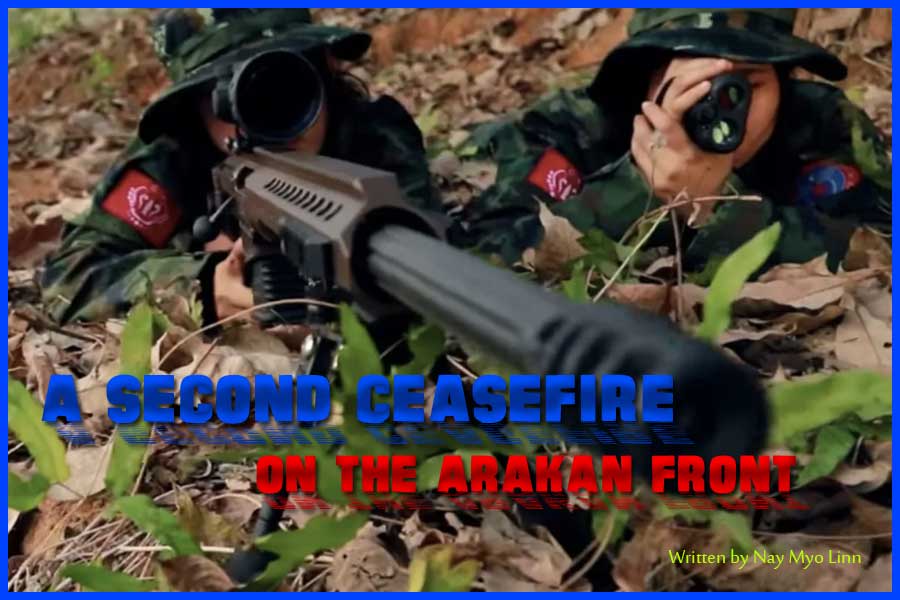 Many political analysts and average folk who thought that the fighting between the Myanmar military and Arakan Army (AA) would only further intensify during the dry season were taken aback by the news of an unexpected ceasefire recently.

Renewed fighting broke out in Chin State’s Paletwa Townhip, then Maungdaw and later Rathedaung, Ponnagyun, Kyauktaw, Mrauk-U, Minbya and Ann townships. The Arakanese ethnic armed group seized some junta bases in Maungdaw and Paletwa, and the Myanmar military used its Navy and Air Force to conduct operations after suffering high casualties in battles with the AA.

One of the notable battles was when the Arakan Army took control of a junta base near mile post No. 40 on the Arakan-Bangladesh border after some 30 days of fighting. The Myanmar military brought in reinforcements and also carried out air and artillery attacks to take back the base, but failed.

It was, therefore, understandable that many thought the fighting would continue to escalate in Arakan State.

After two years of intense fighting from late 2018 to the first week of November 2020, the two sides observed an informal ceasefire to make way for the general elections. On February 1, 2021, the Myanmar military seized power in a coup from the democratically elected government led by Daw Aung San Suu Kyi.

Over the past year, as the Myanmar military was distracted by the coup fallout, the AA took advantage of the lull in fighting, and consolidated its control of large parts of Arakan State, strengthening its administrative grip under the Arakan People’s Authority, fielding its own judicial system and police force. The armed group travelled to rural villages and replaced the existing administrators with their own.

People have turned to the Arakan People’s Authority instead of the junta's administrative mechanism. The AA’s rising popularity among Arakan residents was a cause for concern for the Myanmar military, which in response travelled to villages and warned villagers to steer clear of the AA, and not to support it.

The AA provided assistance to some resistance groups born out of the Spring Revolution, and refused to attend peace talks with the junta, but instead held talks with the parallel National Unity Government, which has raged against the regime since its formation.

Myanmar military troops subsequently travelled from one village to another and disrupted the functions of courts and administrative offices run by the AA and its Arakan People’s Authority. The regime also imposed travel restrictions on roads and waterways, hastening the all-out conflict that began anew in August.

“Clashes broke out again mainly because the State Administration Council unfairly detained our Arakanese civilians, and imposed a total ban on delivery of vital items like food and pharmaceuticals. We had to respond accordingly, which further increased tensions and resulted in fighting,” said AA spokesman U Khaing Thukha.

Junta travel restrictions took a heavy toll on Arakan residents, and this is the reason behind the ceasefire.

The sown acreage of paddy declined by around 30 percent due to abnormal weather patterns, and high fertiliser and fuel prices. And farmers were unable to harvest their paddy fields due to indiscriminate junta shelling.

While civilians were facing serious food shortages and price hikes, pharmaceuticals were running out at healthcare facilities due to the junta’s travel restrictions. The AA has observed a ceasefire because now is the harvest time for local farmers, said the AA spokesman.

Japan’s Nippon Foundation chairman Yohei Sasakawa mediated the ceasefire between the Myanmar military and the AA. He also brokered the truce between the two sides back in 2020.

“We have acted in serious consideration of the public interests, and to ease deepening hardships facing the people, and create a better situation for them,” said U Khaing Thukha.

AA leaders have previously stated that they want and will fight for a political status that is not, under any circumstance, lower than that of the confederation.

“I would like to say that we will build Arakan State with unity, according to the way of Rakkhita established by AA,” U Khaing Thukha told DMG on November 19.

Saw San Nyein Thu, chairwoman of the Rakhine Women’s Initiative Organization, noted that many civilians were killed and injured due to the fighting, and the flow of goods was reduced to a trickle or none at all in some places due to the blockading of land and water routes.

“The latest ceasefire agreement between the AA and the military will lead to a political solution to the current situation,” she said. “So the ceasefire can come in many forms. In any case, we would like to say that we are happy from the public’s side, mainly given a situation in which the public is either harmed by fighting or not.”

The military has detained 324 civilians amid heightened hostilities since August, with less than 100 of them subsequently released to date. The AA spokesman said at least 26 civilians in Arakan State were killed and 111 others were injured by Myanmar military artillery strikes, gunfire and other conflict-related violence from September 20 to November 27.

“The international community needs to pay close attention to the war crimes committed by the military junta, and make an all-out effort to punish those who are responsible for the military’s atrocities,” he added.

DMG attempted to contact regime spokesman Major-General Zaw Min Tun to seek comment on the AA spokesperson’s remarks, but he could not be reached.

The people who will be most happy if the fighting truly stops are the people who are suffering from the effects of the fighting. Internally displaced people (IDPs), local people injured by the shellings and civilians arbitrarily arrested on suspicion are among those affected by the consequences of the armed conflict. If the ceasefire holds, they will hope that those IDPs will be able to return home and that those arrested on suspicion will be released.

“Actually, they are not the guilty ones. I want them released as soon as possible,” said a family member of Ko Maung Tun Hlaing, a resident of Wapyan Village in Kyauktaw Township. Seven local men, including Ko Maung Tun Hlaing, were arrested at a security checkpoint set up by the military’s Light Infantry Battalion No. 539 near Kansauk Village on November 18.

Arakanese people who are suffering from shortages of goods and high prices want the military council to reopen the land and water routes, which are important for the flow of goods, because the fighting has stopped.

Multiple road and water routes remained blockaded more than a week after the truce was reached, however, with the people of Arakan urging the military council to reopen these critical routes as soon as possible.

On the other hand, landmines planted by the armed groups and unexploded ordnance in Arakan State need to be removed as soon as possible. Fighting often occurs closer to the rural villages than urban areas, and most rural people rely on farming and collecting vegetables and firewood for their livelihoods. They face landmine threats regularly.

Though the informal ceasefire has held for more than a week now, there is little doubt about the fragility of the truce.

“Since there is an informal ceasefire between the military and the AA, if something is done by the other side, fighting may resume at any time,” U Khaing Thukha said.