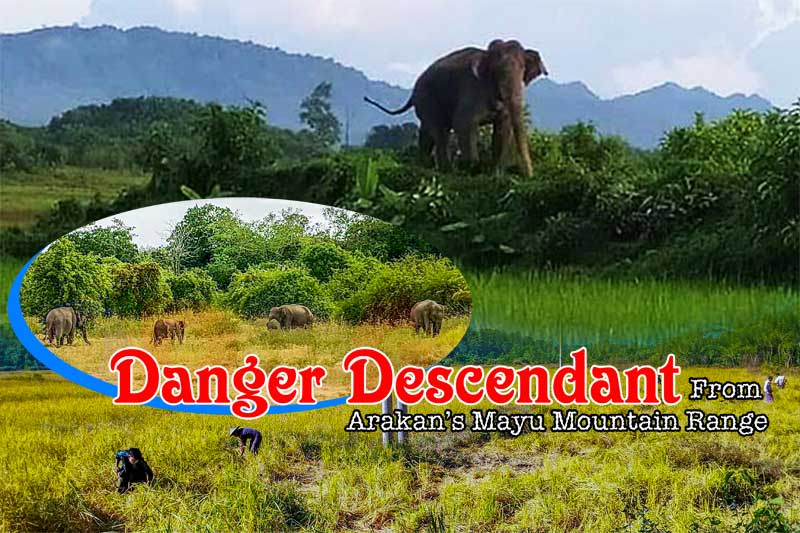 The Buddhist monk U Sarana became upset when he noticed the flattened rice plants, which were nearly ready to be harvested. Large footprints could also be seen in the affected paddy field.

Annually, villagers in northern Arakan State face danger from wild elephants that often come to eat their rice plants at night. As the pachyderms wander through paddy fields in search of tasty grains, the rice plants are inevitably trampled.

U Sarana opened a school in Nanthar Taung Village, in the far north of Maungdaw Township, providing free education for some 500 students from ethnic villages in the area. To feed the students, he had rice planted on more than 50 acres of fields near Nanthar Taung Village.

“Due to military tensions in northern Maungdaw, people usually don’t go out at night,” said U Sarana. “Wild elephants come near the village in the evening. They eat and destroy rice plants daily.”

Herds of wild elephants arrived near the village in early October, and they have been dining on the villagers’ paddy fields in the months since.

“There are around 40 elephants, and the Mayu mountain range is their habitat. As farmers can’t guard their farms around the clock, elephants have become bolder,” said U Sarana.

Wild elephants typically live and graze along the Mayu mountain range, the banks of the Naf River and in neighbouring Bangladesh. Locals say although these pachyderms rarely visited villages in previous years, they have moved this year in groups to graze closer to human settlements, resulting in more frequent human-elephant encounters.

Locals believe the elephants were forced out of the forests by fighting between Myanmar’s military regime and the Arakan Army.

“Wild elephants not only destroy rice plants, but also other crops including beans and pulses. So, we are unhappy,” said U Sarana.

Despite the very real danger of being attacked by wild elephants, farmers are taking that risk to harvest their paddy fields, which many grew with great effort amid instability in the region. It is, in some ways, a race between species: If the humans can’t reap the harvest swiftly, their rice plants will either be eaten or trampled by the elephants.

Over the years, there have been several examples of humans being attacked by wild elephants. When a resident of Padauk Myaing Village in Rathedaung Township tried to scare away wild elephants eating his crops on November 28, 2018, an elephant used its trunk to fatally strangle him.

Hostile encounters between wild elephants and locals are made more likely due to the fact that many villagers’ livelihoods are heavily dependent on forests.

“Annually, people are killed or injured in incidents involving wild elephants. Government departments do nothing when we make reports about those cases. So, people have to exercise caution to avoid wild elephants,” said the ex-MP.

It is difficult to obtain data about casualties inflicted by wild elephants in Maungdaw, but the anecdotal evidence is troubling.

“Children were playing at the paddy field near the village, and the elephant came and killed [the boy] using its trunk,” said local administrator U Zaw Win Aung, speaking of a 13-year-old Hindu teenager who was killed in an attack by a wild elephant in the east of Nga Khu Ya Village in northern Maungdaw Township.

“The teenager died of internal injuries and leg injuries,” the Nga Khu Ya Village administrator added.

A man and two women from Shwetaung Village, Maungdaw Township, were injured when they were attacked by a wild elephant while fishing near the foothills of the Mayu Mountain range on February 27 of last year.

And a 48-year-old man from Kanthayar Village, Maungdaw Township, was killed by a wild elephant on his way back to the village from the Mayu mountain range on June 28, 2019.

A local man from Kyaukchaung Village, Maungdaw Township, was trampled by a wild elephant and died of his injuries on January 10, 2019. In a case of property destruction, wild elephants destroyed the gate of a police outpost in Maungdaw Township’s Meetaik Chaungwa Village on December 23, 2018.

U Ba Aye, who works in agriculture and livestock farming in Maungdaw Township, said human activities are a major part of the equation.

“Agricultural activities are like an invitation to wild elephants,” said U Ba Aye, who is chairman of the Arakan Rakhita Group (ARG), a social organisation that helps ethnic people in the Maungdaw region access opportunities related to agriculture and livestock.

In 2021, U Ba Aye and three others encountered danger from elephants in a plantation near Khayaymyaing village. While the four of them were in the plantation, a wild elephant arrived and prepared to fight against them. Therefore, they threatened the elephant and drove it away, but when U Ba Aye was alone, the wild elephant returned.

When wild elephants come to the plantations and fields near villages, locals use various methods to scare them away.

U Ba Aye said this can include people banging on drums, shooting the elephants with slingshots, and using high-powered flashlights to drive the animals away.

“In the past, when herds of elephants came to the paddy fields, villagers would gather to scare them away with torches,” said U Tun Tin Soe, the administrator of Chainkhali Village in Rathedaung Township. “Now, due to the military conflict and the fact that the villagers dare not go into the mountains, the wild elephants have destroyed paddy fields and plantations.”

The wild elephants stand in contrast to tamed elephants. As of October 2022, there were 113 elephants in the Arakan State townships of Taungup, Thandwe, Gwa, Kyaukphyu and Ann being used by Myanmar Timber Enterprise, according to the state’s Forest Department.

An official from the Arakan State Forest Department said it is not known how many wild elephants inhabit the Mayu mountain range across Maungdaw, Buthidaung and Rathedaung townships. He added that conservation activities, including efforts to conduct a wild elephant survey and census, were not possible while regional stability persisted in Arakan State.

Some locals, including U Sarana, see elephant conservation camps as one potential means of addressing the increasingly close-quartered and antagonistic relationship between elephants and humans in Arakan State.

“There is no elephant conservation camp in this township,” said the monk. “In any case, I would like to urge the relevant authorities to conserve elephants in order to reduce the danger of wild elephants and humans [coming into conflict with one another], as the farmers in this area are facing many difficulties.”