Amid fear and suspicion, young Arakanese lives on the brink 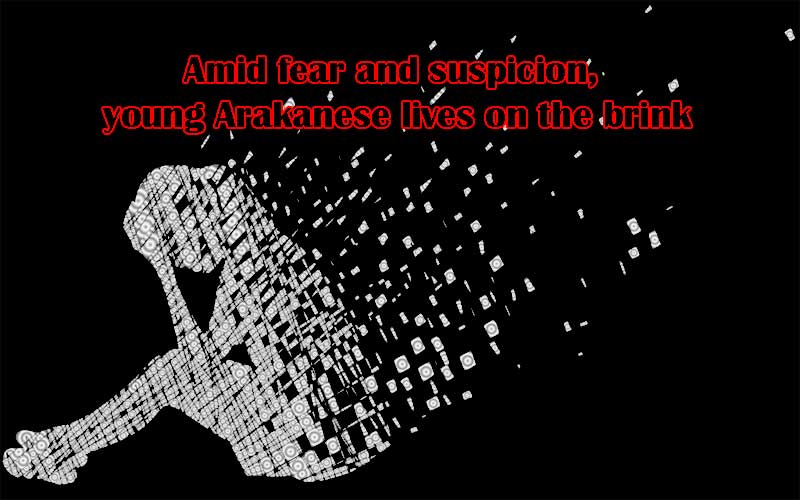 Fighting has plagued Arakan State since December 2018 and continues to increase in ferocity to this day. Civilian casualties and the number of people displaced from their homes continue to mount and we hear of arrests, torture and murder on a daily basis, with no end in sight.

Most Arakanese youth are afraid. If they step outside their homes, they face searches, interrogation, arrest and potentially prolonged detention. Worst of all, there have been several instances of a person detained, followed by the discovery of a body.

On May 10, a video emerged online showing five Arakanese youths aboard a navy vessel, blindfolded and with hands behind their backs. The video showed them being kicked and beaten during an interrogation, and quickly spread across social media networks. The next day the Tatmadaw reported that they had not yet confirmed whether those carrying out the beatings were its soldiers.

Public attention grew as the video spread across national and international networks; so much so that on May 12 the Tatmadaw was forced to confirm that the interrogation methods shown on the video were illegal, in a statement vowing that action would be taken against those troops involved.

According to news reports, the five men beaten on the boat had been among 38 arrested in Kyaukseik village, Ponnagyun Township, on April 15. The remaining 33 have since been released. But a case has been opened against the five by the Ponnagyun police, with the men facing charges related to Myanmar’s Counter-Terrorism Law, which carries a maximum sentence of life in prison. The case was opened on April 24.

However, families have told the media that they saw the five men being taken by military vehicle from the Ponnagyun police station on April 27. One of the questions that arose was: Instead of being taken aboard a Tatmadaw vessel, tortured and forced to confess, why weren’t the five men questioned in court on suspicion of involvement with a state-designated terrorist organisation?

While this particular incident has attracted media attention, there have been at least 15 similar incidents from 2019 to the beginning of this year, including deaths and disappearances.

On May 2, 2019, 275 people were held by the Tatmadaw for interrogation inside a school in Kyauktan village, Rathedaung Township. Allegedly some of the detainees tried to grab soldiers’ rifles, after which guns were discharged. Six people were shot dead at the scene with a further eight wounded, two of whom later died while being treated in hospital.

Locals have reported that on the day of the fatal incident, a mentally disabled person among those brought to the school for interrogation began screaming uncontrollably and was subsequently shot. However, this differs from the Tatmadaw’s version of events, which claimed that he was shot while attempting to grab a soldier’s rifle. To date no action has been taken despite an investigation conducted by the Myanmar National Human Rights Commission.

In another case, 28-year-old Ko Zaw Win Hlaing was arrested while eating lunch along with three colleagues on June 20, 2019. He was a carpenter carrying out repair work on the Waitharli Pagoda. According to a Tatmadaw statement released at the time of his arrest, Ko Zaw Win Hlaing and 10 other men were being investigated on suspicion of having ties to the AA.

On July 1, 2019, Ko Zaw Win Hlaing was admitted to Sittwe General Hospital bearing injuries consistent with torture. He died from his injuries while receiving treatment.

“Dear Mother, please don’t cry for me. I don’t think I have much longer to live. I will die soon.  My innards are all smashed up and in pieces. Please don’t cry for me, Mother. I feel like I am suffocating. I am going now, Mother.” These were the final words of Ko Zaw Win Hlaing, spoken to his mother on his deathbed.

Despite promises that legal action will be taken against perpetrators of unlawful arrests, torture and murder of civilians, there is no transparency in the legal process.

Similarly there have been incidents of disappearances following arrests. On March 16 in Kyauktaw Township, U Maung Win Sein from Tinma Gyi village was arrested by troops from a battalion from Tatmadaw LID 11 while eating dinner with his family. Two months on, his whereabouts is unknown and his wife says she doesn’t know if he is alive or dead.

As is typical during times of conflict, human rights violations occur and civilians are injured and killed. However, both sides participating in the conflict need to consider reducing civilian casualties as much as possible.

The number of Arakanese youths who have lost their lives after an encounter with the increasing number of Tatmadaw checkpoints along the Sittwe-Yangon road has also increased. According to the military’s statements, most often the ostensible reason that they are shot dead is that they were somehow linked to the AA, regardless of what the families or local residents say.

On a daily basis, Arakanese youth face fear and uncertainty. It is no longer safe for them to stay at home, and yet they risk their lives when venturing out. If they turn and run they will be shot.

As for the current state of affairs, no matter which way they travel, by road or waterway, they will experience checkpoints and suspicion. And if they don’t travel and stay at home, still they may be arrested by Tatmadaw troops conducting searches. Arrest, beatings and numerous kinds of torture are commonplace.

It is time to reconsider the government/Tatmadaw policy regarding the militarisation of Arakan State, given the trauma it causes while failing to protect the people. There is an ancient proverb: Corner a dog on a dead-end street and it will turn and bite.