Distilling the Way of Rakhita

As the Arakan Army (AA) celebrated the 12th anniversary of its founding on April 10, not only Arakanese people but also the leaders of other ethnic groups waited with interest to read the remarks of AA Commander-in-Chief Major-General Twan Mrat Naing. From his message, they hoped to decipher the AA’s stance on Myanmar people’s resistance to the military coup of February 1.

The AA has established a stronghold across much of Arakan State after engaging Myanmar’s military in more than 4,000 clashes, varying in size and intensity, over the two years spanning late 2018 to November 2020. On average, there were four to five clashes per day. The ethnic armed group was able to repulse the combined onslaught of Tatmadaw army, navy and air forces, and has proven its superiority over the military in ground warfare. It has thus won widespread recognition not only among Arakanese people but also from other ethnic armed organisations as an armed revolutionary group with formidable battlefield prowess.

The AA was formed 12 years ago in northern Myanmar’s Kachin State. Today the armed group promotes the “Way of Rakhita,” which the AA chief has described as “the struggle for national liberation and the restoration of Arakan’s sovereignty to the people of Arakan.” It has also introduced the notion of an “Arakan Dream 2020,” fighting for that dream with the slogan, “Let’s move forward through the storm.” To many Myanmar people’s astonishment, the armed group has more than demonstrated its military capabilities, deploying various tactics to defend, repulse, intercept, and annihilate enemy troops.

Clashes erupted between the Tatmadaw and the AA in Arakan State in late 2018, and steadily intensified thereafter. Rallying around the war cry of “Build while we fight; fight while we build,” the ethnic armed group continued to pursue the Way of Rakhita. The AA has never properly elaborated on this concept, and has only spoken of a number of steps it would take as part of this process. It started installing its administrative mechanism, which it calls a “People’s Authority,” in early 2020, while fighting with the military raged. One year later, the armed group has put its administrative mechanism in place across Arakan State, with support from the vast majority of Arakanese people.

Meanwhile the National League for Democracy (NLD) government, most of whose leaders were detained by the Tatmadaw during or since its February 1 coup, imposed an internet blackout in northern Arakan and Chin State’s Paletwa Township for more than a year. The longest internet shutdown in the world, it came during the two years of fighting in Arakan State.

In a dictatorial manner, the NLD government restricted the flow of information into Arakan State while Arakanese people were enduring grave human rights violations committed by Myanmar’s military (as civilians bearing the brunt of the conflict’s hardship), plus the COVID-19 pandemic. The NLD government led by Daw Aung San Suu Kyi failed to recognise the needs of Arakanese people. Far from showing sympathy, her administration publicly praised the military, which was committing serious human rights violations, and labeled the AA/ULA (United League of Arakan) a terrorist group and unlawful association.

The NLD enjoys popular support among Bamar people, but failed to do what it could as a government for Arakanese people during the armed conflict in Arakan State. Such discrimination drew the ire of Arakanese people. In a Union Parliament dominated by the NLD, Arakanese lawmakers barely got the chance to discuss Arakan issues freely.

Prior to the 2015 general election that brought the NLD to power, two powerful Arakanese parties — the Arakan League for Democracy (ALD) and Rakhine Nationalities Development Party (RNDP) — merged as the Arakan National Party (ANP) in hopes of representing the entire Arakanese people. But ideological differences, cults of personality and factionalisation brought cracks within, and in the span of five years what had been a promising merger split into three parties: ANP, ALD and the Arakan Front Party (AFP). Over the past 10 years, the politicians calling themselves nationalists were unable to provide any leadership or vision for the people of Arakan.

The true colours of the Arakanese political parties were exposed after the coup staged by the Myanmar military and led by Senior-General Min Aung Hlaing. Out of four Arakanese political parties, three have proven themselves to be allies of the military. Meanwhile, some leaders of the ALD, which was established in 1990 and is a member of the United Nationalities Alliance led by the NLD, were forced into hiding after the February coup.

The ANP has joined the junta’s governing body, the State Administration Council (SAC). The council released prominent Arakanese politician Dr. Aye Maung, who was sentenced to 20 years in prison for high treason under the NLD government. Dr. Aye Maung enjoys popular support among Arakanese people, and he previously served as the ANP chairman. More recently, he has been described as the one responsible for sowing the seeds that ultimately led to the creation of the AFP. With the exception of the ALD, the three other Arakanese parties attended a meeting of the military-appointed Union Election Commission following the Tatmadaw’s putsch.

The AA chief shed some light on the “Way of Rakhita” in his message marking the 12th  anniversary of the AA’s founding. He said the armed group is “implementing a governance mechanism with strong institutions for public administrative affairs including administration, judiciary and public security.” He also urged the Arakanese people not to confuse Myanmar’s current political situation with Arakan’s political situation. “We have our ‘Way of Rakhita.’ We have a clear political objective,” he said. He also urged the AA to stay alert as there is still no concrete agreement for peace in Arakan State. 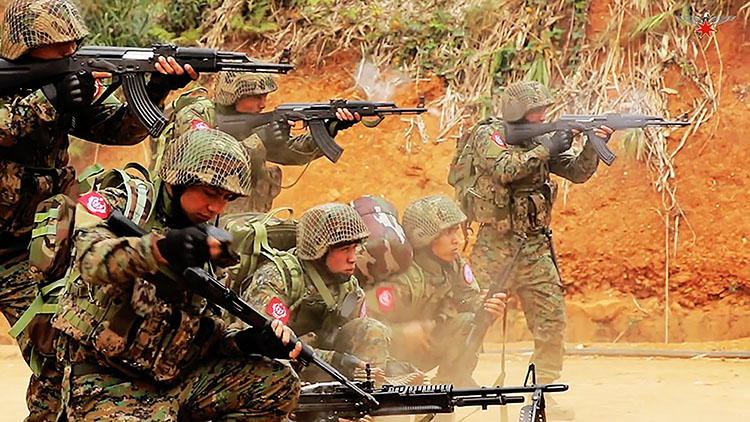 Eyebrows were raised when the AA chief, in an interview last year, said he would like to achieve “confederate status” for Arakan State. Since then, he has attracted widespread attention as an ethnic leader with strong political ambitions. In his 12th anniversary message, Major-General Twan Mrat Naing implied that Arakanese people should be in control of their own destiny. He called on them to build a future for Arakan State according to the Way of Rakhita, and create opportunity out of the political crisis that has resulted from the coup, in order to rebuild Arakan State.

As the AA has garnered strong public support across Arakan State, its chief’s message can be interpreted as the armed group asserting its intention to implement a more effective governance mechanism than it was able to in 2020, or indeed any year hitherto.

The AA is seeking to shape the future of Arakan State by itself, no matter which side wins in the test of strength between the people’s will and Myanmar’s military. Challenges will remain on this journey, but the Way of Rakhita is proving to be a potent rallying cry for Arakanese people who want self-determination and autonomy.

The “Way of Rakhita” is an unprecedented strategy, never before employed by politicians or revolutionaries. It is a means of establishing a governance body by avoiding challenges and confrontation as much as possible. With strong public support for the AA in Arakan State, such a governance body will pave the way for Arakan State to achieve confederate status in Myanmar. For Arakan State to shake free from the rule of the central government, it is important that Arakanese people do not confuse Arakan’s political objectives with the current political situation in Myanmar. The more they understand the AA chief’s message, the smoother the implementation of the Way of Rakhita will become.