After Three Months of Cooperation With Junta, It Is Too Late for ANP to Mend Fences 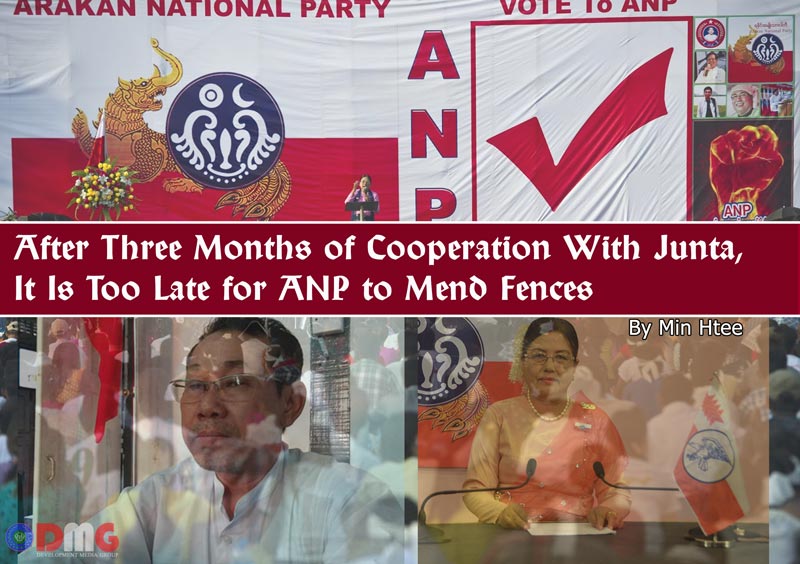 The Arakan National Party (ANP) chairman said at a party press conference on Wednesday that the party has ended its association with the military junta because the latter has failed to meet the demands of the former for further cooperation.

There were strong criticisms against the ANP after it made a hasty decision to take sides with the military, which overthrew the democratically elected government on February 1. After its split with the military regime, it is interesting to consider how the party will entice the people again.

The Arakanese party originally made the following demands for cooperation with the military regime:

(1) To release Arakan State Parliament Speaker U San Kyaw Hla; (2) to reserve the Arakan State Parliament speaker position for the ANP; (3) to grant the ANP a leadership role in Arakan State’s administrative body; (4) to grant seats for the ANP in the administrative bodies of Yangon and Ayeyarwady regions; (5) to delist the Arakan Army/United League of Arakan (AA/ULA) as a terrorist group; (6) to release Arakanese political prisoners imprisoned by the previous government; and (7) to drop lawsuits against Arakanese people who have been charged under the Counter-Terrorism Law across the country.

It is indisputable that the ANP was formed in response to the wishes of the entire Arakanese people. The general election was held in 2010 based on the 2008 Constitution, in a transition from military dictatorship to democracy. Together with the National League for Democracy (NLD), the Arakan League for Democracy (ALD), which contested the 1990 poll, boycotted the 2010 voting.

However, some Arakanese politicians who preferred to push for reforms through the parliament formed the Rakhine Nationalities Development Party (RNDP) to contest the first general election since the 1990 poll, in 2010. The RNDP won the largest number of seats in Arakan State — a testimony to the overwhelming support of Arakanese people for the party.

Dr. Aye Maung took the helm of the RNDP, and made his name as a leading Arakanese politician on Myanmar’s political stage. The party became synonymous with Dr. Aye Maung, and he was put on the vice presidential shortlist in the Upper House of the bicameral parliament.

As the NLD decided to contest the by-election in 2012, the ALD led by veteran politician U Aye Thar Aung also registered again as a political party. In response to calls from Arakanese Buddhist monks and laypeople for a single, united political leadership in Arakan State, the ALD and the RNDP merged in 2013, and Dr. Aye Maung served as the chairman of the merger, or the ANP.

Following party infighting, a faction left the ANP and re-established the ALD in 2017. ANP chairman Dr. Aye Maung also submitted his resignation, and was working to establish a new party, which would later be known as the Arakan Front Party (AFP), when he was arrested and given a long-term prison sentence under high treason charges for remarks deemed to be supporting the Arakan Army (AA).

The 2017 by-election in Rathedaung Township, a stronghold of the ANP, saw a contest between the ANP, the ALD, and Dr. Aye Maung’s son U Tin Maung Win, who contested as an independent candidate because the AFP had not officially registered at the time.

The seat representing Rathedaung in 2017 was left vacant by ANP vice chair U Phoe Min, and it was the seat that tested the strength of the ANP and Dr. Aye Maung. The ANP candidate lost to U Tin Maung Win, showing that Dr. Aye Maung had built up his personal popularity in a way that could challenge the ANP.

But after fighting broke out between Myanmar’s military and the AA in late 2018, Arakanese people have shifted their attention to the AA, and away from the Arakanese politicians who were struggling for power. As the fighting continued in Arakan in 2019-20, the AA and its political wing, the United League of Arakan (ULA), won the support of the entire Arakanese people against the backdrop of a serious decline in public reliance on local political parties.

Nonetheless, the ANP managed to win the majority of seats in the Arakan State Parliament in the 2020 general election. And it won the fourth-largest number of seats at the national level despite the fact that elections could not be held in some parts of Arakan.

The party then declared “Democracy, Equality, Federalism and Development (D.E.F.D)” as the party objective. The party’s manifesto for the 2020 poll, however, did not mention how it would realize its D.E.F.D goal, and rather only pledged to do regional development works like building roads and bridges and schools.

It is quite difficult under the 2008 Constitution for an ethnic state-based party to honour this pledge. Under the 2008 Constitution, power is centralised and shared only between the military and Union government. The ANP, which won the largest number of seats in Arakan State in the 2015 general election, hoped that it would be allowed to lead the Arakan State government. But the NLD, which won a majority at the national-level in the country’s first-past-the-post electoral system, rejected the ANP’s proposal, leading to discord between the two parties.

The military regime seized power in a coup on February 1, 2021, refusing to accept the results of the third general election since 2008 despite the fact that the results reflected the wishes of the majority. One of the ANP’s senior leaders, policy leadership committee member Daw Aye Nu Sein, joined the State Administration Council (SAC) on February 3, in the aftermath of the new ruling council formed post-coup.

The ANP released a statement addressed to the Arakanese people on February 4, justifying its move to cooperate with the military regime. Heavily criticised by the public and Arakan civil society organisations, the party held a central executive committee meeting in Mrauk-U later that month, in which party leaders sought to distance the ANP from Daw Aye Nu Sein’s “personal” involvement with the SAC.

The ANP released another statement on March 22, which was totally different from its previous statement. In its new statement, it reintroduced its D.E.F.D goal.

Which Path Will ANP Take?

Elections are critically important for political parties. Political parties can’t survive without elections or recognition of electoral outcomes. By cooperating with the military junta, the ANP has flagrantly betrayed democracy as well as its supporters, and Arakan State. There is no democracy and equality — the objectives of the ANP — under dictatorial rule.

Neither the demands it has made to the military council nor the demands it has pressed in its statement to the Arakanese people are claims a political party can make. And it is a wrong concept to use those demands to justify its cooperation with the military. The ANP’s call for the release of Dr. Aye Maung and writer Wai Hun Aung is in fact an attempt to take advantage of their personal popularity.

“We have justice and we also have swords,” the AA chief has said in an interview. Its underlying meaning is obvious. It is the stance of the AA. The ANP’s showings of concern for the AA is nothing more than an attempt to ease public anger. The AA will not bow to the 2008 Constitution, and is not interested in its rewards and punishments. The armed group has a firm political stance and it is willing to either fight or talk.

More than three months into the coup, the military regime has killed nearly 800 people with over 3,000 people still being detained. Even as the ANP has decided not to cooperate with the regime anymore, it is already too late. It has already blatantly violated the election promises it made to the people, as well as the democratic rights the entire nation’s people are longing for.

Democratically, its demand to lead the Arakan State government is fair, and represents its supporters. But its cooperation with the brutal military regime, without any valid reason, amounts to ignoring the people’s representation, and poisoning democracy and justice. Even as the ANP has decided to end its association with the junta, it will not be able to win back its political dignity and the public trust.