Should the ANP Be Reorganised? 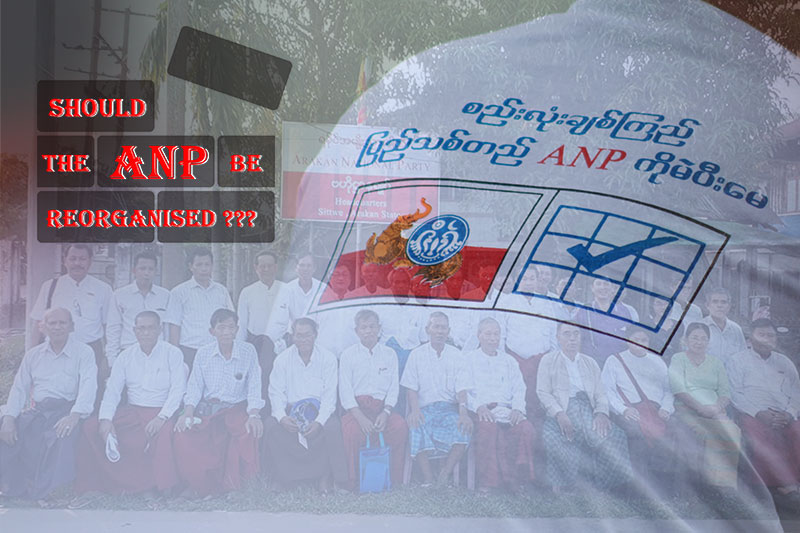 A statement issued by Arakan National Party (ANP) Chairman U Thar Tun Hla at a press conference on May 5 said the ANP’s decision to suspend its affiliation with the military-led State Administration Council was illegal and inconsistent with party policy. The issue was posted on the social media page of the ANP’s policy steering committee. The party’s Central Executive Committee has no authority to decide whether or not to continue working with the State Administrative Council, and it is instead up to a meeting of the Central Committee (CC) to decide.

The ANP initially released a statement welcoming the invitation of the State Administration Council to join it. The ANP’s cooperation with the State Administration Council caused a great deal of division within the party, with some party members resigning. The ANP has the most support from the Arakanese people, but instability within the party has seen public divisions since its inception. In addition, the Arakanese people must consider what needs to be reformed within the Arakan National Party.

Taking a Lesson From the Past

There were some disagreements between the leaders of both parties before the end of the unification conference due to skepticism between the two leaders over the merger. Although I don’t want to elaborate on the incident, did the ANP unification take place?

The National League for Democracy (NLD) won the 2015 general election and was allowed to form a government. The ANP secured at least 30 seats in the Lower House of Parliament, and the ANP demanded the right to form a government in Arakan State. However, the ANP and the NLD began to disagree after the NLD rejected the request. The ANP then adopted a policy of not allowing members of the union/state government to run for office (in other words, restricting the participation of ministers in the NLD government). However, after U Aye Thar Aung — a veteran Arakanese politician who joined the ALD — took over as deputy speaker of the Upper House, divisions within the party became increasingly untenable.

The ANP did not try to find a solution within the party and ended its relationship with the United Nationalities Alliance (UNA), which includes the ALD. The decision was abhorred by ALD leaders and they held a press conference. Six ALD-led leaders from the ANP were expelled from the party on the grounds that the press conference violated the party’s rules. Within the ANP, sectarianism dominates. Dr. Aye Maung also resigned because of his love for sectarianism. The ANP’s politics could disappear today or tomorrow if it continues to grow in personal power and sectarianism without trying to solve the root causes of the problems. So history needs to learn from its mistakes.

Policy instability and disciplinary issues were so weak that the Arakan National Party lost its national political structure and split into three parties within five years of pursuing a pro-Arakan, one-party ideology.

Why Is the ANP needed?

In general, the Arakanese people, unlike other ethnic groups in Myanmar, have a distinct position and a high appreciation for their national culture, and their political views are unique in Myanmar. That is why, looking back at the elections in Arakan State, political parties on the mainland have not been able to win. This is the strength of the Arakanese people and the standard of democracy.

It is not wrong to say that there is only one party in Arakan State, and that it requires having a single party in Arakan State to build institutions for the benefit of the Arakanese people. The division of political parties also divides the people. However, the Arakan National Party’s ability to lead the people is still very weak due to weak policies and discipline within the ANP.

The ANP has remained divided among party leaders up until and through its joining of the State Administration Council, which was formed by the military that seized power on February 1. It is also a matter openly discussed within the party whether the policy is weak or not. In any case, there is no denying that the Arakan National Party has full responsibility for the construction of Arakan State and Arakanese national politics, because the ANP is the “national party of the whole Arakan State.”

What Did the ANP Do Wrong?

The first is the ANP’s Policy Steering Committee. In a political party, policymakers are a very important group. In the case of the Arakan National Party, the policy steering committee formulates policies and submits them to the Central Executive Committee (CEC), which, like the CEC, implements the party’s political goals. Members of the policy steering committee themselves were at the forefront of joining the Myanmar military. CEC members, CC leaders and the party’s new generation of youth groups have criticised the party for not joining the Myanmar military. However, those who agreed to join the Myanmar military did not seem to agree.

Three months later, the ANP was unable to join the Myanmar military because it did not get the chairman of state administration council and ministerial posts, and the Policy Steering Committee advised the CEC that it would not continue joining the Myanmar military. Given this, the policy steering committee was unable to set the right political goals. The ANP should consider when it has benefited the Arakanese people in politics led by Burmese leaders. If we want to lead Arakan politics in the form of whether it is beneficial or not, we will not be able to formulate the policy properly and the Arakan National Party could collapse at some point without the support of the people.

The second is the Central Executive Committee (CEC), which consists of chairmen and secretaries. After the RNDP after the 2010 general election, the ANP has the largest number of MPs in Arakan State and has the most support from Arakanese people. Care must be taken not to abuse this support. We must not forget that a party is based on the support of the people and the needs of the people.

Joining the coup regime forces, ignoring the bitter suffering under the Myanmar military over the past two years, does not make for a good leader in Arakan politics. Such a joint venture was not consulted with all CEC members, but only by the chairmanship and policy steering committee. Due to the wrong decision, the ANP has left an indelible mark on Myanmar’s political history and Arakan politics.

Should Leaders Be Changed?

The ANP’s current leaders need to know that a political party does not stand as a civil society organisation, but rather with political aspirations that go with the support of the people and the interests of the people. Leaders must be able to make the right decisions. If the leaders are bad, the politics that the Arakanese people expect will not be achieved.
As a result of joining with the Myanmar military, young people with national political foundations and management skills left the ANP. The departure of such qualified young people is highly detrimental to a political party. These young people may one day lead the Arakan National Party. As mentioned in the previous articles, we need to build the capacity of the less qualified, and we need to attract more qualified people.

The ANP Needs to Be Strengthened

Instead, following the decisions of the so-called elders, which are traditional ideas, will be more like a family business than a political party. The ALD, which was expelled from the current ANP, announced in the 2020 election that it had re-registered its original party and left the party chairman, sowing seeds for another party. The emergence of another political party, the Arakan Front Party (AFP), which also contested the election, does not allow the ANP leaders to lead the Arakanese people until all ANP leaders have acknowledged their full responsibility.

The ANP is still in disarray, and the United League of Arakan/Arakan Army (ULA/AA) is currently leading the entire Arakan nation-building and Arakan State-building project. May all ultimately move toward a better Arakan national politics.