A Nation Plagued by Pandemic in the Midst of Conflict 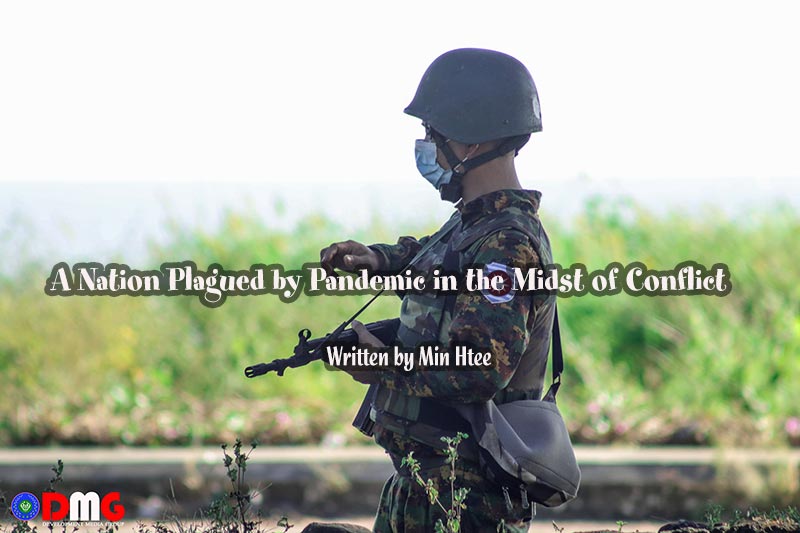 When we say hell, I think we all automatically see poverty. There is no rich man in hell. That is why hell is called hell. In light of all that is happening in Myanmar today, it is undeniable that everyone is suffering.

More than 70 years after independence, the people are still embroiled in civil strife, with Myanmar ruled by a military dictatorship once again and the loss of thousands of lives amid political turmoil.

I can still imagine that during the reign of dictator Senior General Than Shwe, farmers begging for rice around villages for a long time were suffering catastrophic famine. But due to the coronavirus, our people — especially the rural peasantry — have been struggling through the disgusting legacy of past dictators amidst the corrupt dictatorship of the pandemic era; under-funded hospitals and public health departments stretched to the breaking point.

From the post-military dictatorship period that began in 2011, the people went through a period of semi-civilian rule that lasted nearly a decade. But on February 1, 2021, the military seized power once again, killing thousands, arresting thousands and forcing thousands of people to flee their homes.

Looking back on the conflict in Myanmar over the years, there are two aspects. The first aspect is the people’s conflict with the military, which wants to control state power. The other is the political conflict between Burmese political leaders and non-Burman nationalities, the latter having not accepted the Burman nationalist desire to colonise the country since independence from British rule.

Burmese political leaders view the country as a Burman state, and the reluctance to recognise the non-Burman identity of non-Burman ethnic groups in nation-building is a common denominator between military leaders and Burmese politicians today.

In short, the Burmese leaders want to make all the language, literature, culture and history of the country Burmese. Behind this is the policy of a permanent union centred on power and the central government adopting a policy that the country must be made up of the majority Burmans. This means that the Burmans want to control all the self-determination and resource management rights of the states where the country’s minorities live.

Non-Burman ethnic groups have taken up arms against this system of political domination. For more than half a century, the country has been on the brink of, or actively plagued by, internal conflict.

In the six months or so since the coup d’état, the path to peace in Myanmar’s civil war has largely disappeared.

The military coup took place at a time of global confrontation with Covid-19. During the Covid-19 threat under the previous civilian government, doctors and the public became active volunteers in the fight against the pandemic, and the second wave of the virus in Myanmar saw relatively few casualties.

In the months since the coup, Myanmar’s military has not been able to run the administrative machinery properly, and has not yet been recognised by most of the world’s major powers except China and Russia. Sanctions imposed by Western governments targeting the Myanmar military have hurt the economy and contributed to dysfunctionality among even the country’s private banks. Making matters worse, people are no longer depositing money in the banks, leading to widespread difficulties reliably withdrawing money.

A third wave of the Covid-19 pandemic began battering Myanmar in June, less than six months after the military seized power. This time, the toll has been much higher than the first and second waves, killing hundreds of people a day. Because Covid-19 is a respiratory disease, many people infected with the virus are receiving oxygen replacement therapy, and hypoxia is ubiquitous. A week after the Arakan State Administration Council announced that it had enough oxygen in Arakan State, it was clear that the military council was either mismanaging its oxygen supply or lying about the inadequacy of the supply.

Many of those now dying from Covid-19 are suffering from hypoxia. Almost every township in Arakan State is preparing to build its own “self-help” oxygen plant, a damning example of a government’s people left to fend for themselves.

Myanmar is still short of aid from other countries, including financing, due to sanctions imposed by the United States and other Western countries. The banking sector’s ongoing woes mean money is hard to come by for everyone, but consideration should especially be given to caring for the nation’s poor at this time.

Therefore, staying at home is not enough alone to deal with Covid-19, nor is it enough to just wash your hands and shout. At the national level, there is a need to issue national directives and help the unemployed. According to a report released earlier this month, more than 10,000 police officers have been infected with Covid-19. Excessive deaths due to lack of oxygen in hospitals and the inability to bury bodies in Yangon’s cemeteries are signs of the junta’s poor management.

The Covid-19 death toll rises by several souls in Arakan State every day, with more than 2,000 people infected. At present, the spread of the virus is likely to continue to increase before it decreases, and people may be concerned about the extent to which they can fight against Covid-19 while also struggling with poverty.

The military council needs to do better in its fight against the pandemic. If the third wave of Covid-19 infections is not brought under control in a short period of time, the livelihoods of the country’s grassroots will worsen and mortality rates will be even worse than they are now.

People, for their part, need to arm themselves with the knowledge of how to protect against Covid-19, and also ought to consider saving up what they can in terms of money and food — in anticipation of the possibility that a pandemic left unchecked could bring more economic turmoil, famine or worse.