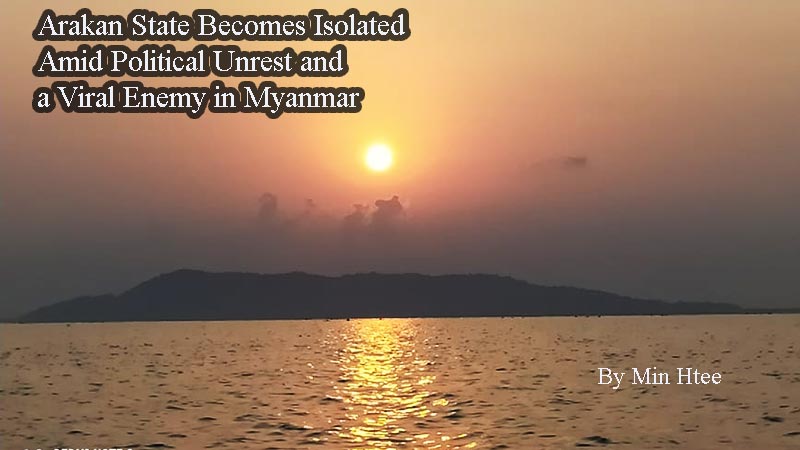 The political landscape in Myanmar is becoming more and more complex, with the civil war and the Covid-19 pandemic coinciding. This combination could lead to extremes for a country, like Myanmar, facing political instability. People can be ruled with guns in the face of famine, but an epidemic like Covid-19 cannot be controlled by force of arms.

It can be very difficult to solve two problems at the same time, and it may not always be practical to solve both simultaneously. The Myanmar junta must first build stability to solve a problem. Without stability, the problem cannot be solved. I think it is time for the ruling junta to choose whether to start resolving the instability caused by the military coup or to fight the growing pandemic. In practice, the military council is working to eradicate the coronavirus.

In any case, the most important thing is to fight the Covid-19 pandemic we are currently facing. This virus can kill many people and destroy many human resources at the same time. The virus can only be eradicated expeditiously if there is enough time, technology and community involvement committed to dealing with the Covid-19 threat.

At present, there is a lack of international assistance in the fight against the pandemic.

The coup regime has purchased 4 million Chinese-made vaccines to combat the Covid-19 pandemic, with China providing another 2 million vaccines to Myanmar. Myanmar has also bought 2 million more virus vaccines from Russia. It has been reported that 1.7 million people in Myanmar have been vaccinated against the virus. It is unknown at this time what Covid-19 vaccine will be given to the public at large.

Fighting the virus is a major challenge for the junta, as many countries around the world do not accept the military coup in Myanmar, with the notable exceptions of China and Russia. At a time when the whole world is facing the Covid-19 pandemic, it will not be as easy as it once was for the Myanmar military to sell the country’s natural resources and make financial transactions, as the previous dictators did.

China, which has invested heavily in building good relations with the military dictators, has been widely opposed by the Myanmar people and is still not considered a good neighbor by the Myanmar people. As China seeks to implement its Belt and Road Initiative (BRI) project, Beijing will have a hard time embracing the military council, given the current political crisis in Myanmar, as it touts policies and development projects purportedly committed to ethical and environmentally responsible standards.

At present, there is a discrepancy between the coronavirus death toll released by the junta and the lists being compiled by civil society and humanitarian groups. Another problem is that there is a shortage of health workers in the country due to the pandemic and the coup. It is likely that some people are dying at home rather than at military council-run hospitals. As a result, the military council may find it difficult to tackle the crisis, and if it fails to do so, the third wave of the virus could lead to further tensions in the country.

The military council released many prisoners from prisons in an amnesty, but did not include those arrested for political beliefs held following the coup. It shows that the military council is not yet willing to resolve the political crisis. Voice of America (VOA) has confirmed that seven women prisoners were killed in riots in Insein Prison, but the full extent of the violence in the prison has not been confirmed.

There have been more than 4,200 clashes between the Tatmadaw and the Arakan Army in the two years of fighting, killing more than 300 civilians and leaving a number of military arrests pending. Fighting in Arakan State ceased in November 2020, and the Myanmar military seized power on February 1, 2021, and arrested the leaders of the ruling NLD party.

The AA Takes on Coronavirus

The leaders of the Arakan Army were barred from participating in peace talks under the NLD government and did not seem to agree with the NLD-led 21st Century Panglong Agreement process. That is why the statement that Arakan State wants to have a confederate model shows that it wants to have a unique Arakan State.

It can be said that the Arakan Army is moving toward nation-building through state-building. Arakan State is home to many different ethnic groups as well as areas of religious and ethnic conflict. However, the Union government did not even allow Arakanese political leaders to participate in the investigation of the conflict between Arakanese and Muslims, as in 2012. However, in building the future of Arakan, if the Arakanese people themselves have the opportunity to mediate and resolve the problems within Arakan State, it will be in the interests of all parties.

If the junta does not accept the Arakan Army’s position, heavy fighting will resume in Arakan State. The Arakan Army chief said in an interview in 2020 that the people are the main force, and the Arakan Army is likely to become one of the strongest ethnic armed forces in Myanmar. Cooperation of Arakanese youth and support of Arakanese people are the answer to the isolation of Arakan State, and if the junta seeks to resolve this reality by fighting again, there will be more intense conflict in the region.

Currently, the Arakan Army has set a stay-at-home period from July 20 to August 4 to fight the pandemic, and has announced 24-point rules to be followed by Arakanese people. The whole Arakanese people have shown their satisfaction by following the rules and will be able to build a disease-free future in Arakan State by following the 24-point rules to combat the common enemy of the nation, Covid-19.