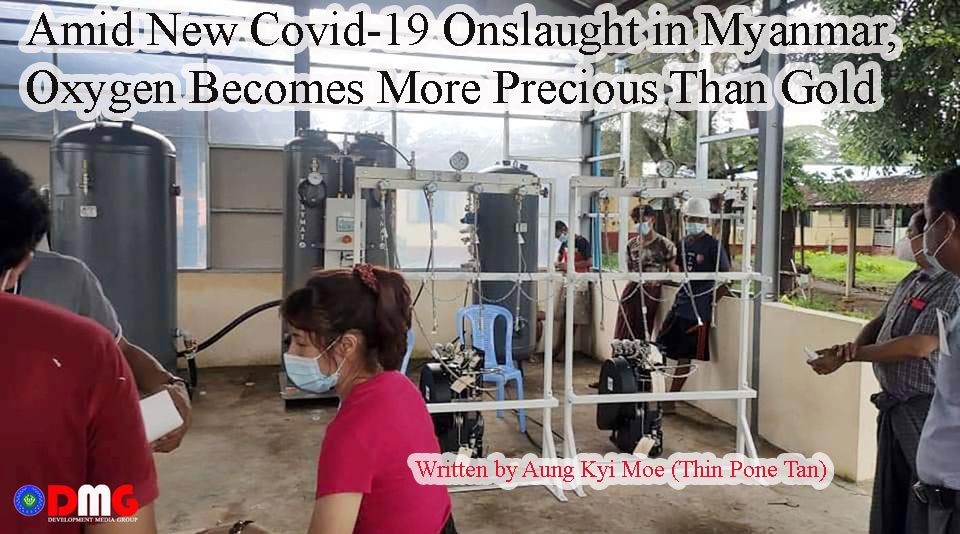 “Where can I get oxygen?” and “Can someone please tell me how I can refill oxygen?” are the types of posts that have flooded social media every day over the past month in Myanmar, after the Southeast Asian nation was hit by a fresh wave of the deadly coronavirus in late May.

In many cases, such posts were followed by another a few days later, informing followers that the patient had died due to lack of oxygen.

Twenty percent of Covid-19 patients need oxygen therapy, according to doctors. In serious cases, patients need two oxygen cylinders per day for 10 to 14 days in a row. The medical oxygen needs of Arakan State have increased following a surge in Covid-19 cases.

At a press conference on July 14, Arakan State Administration Council spokesman U Hla Thein said: “There is nothing to worry about regarding oxygen. We can refill up to 60 40-litre cylinders in Sittwe. And we have also supplied 100 cylinders for emergency use.”

He continued: “We are sending oxygen to Maungdaw and Kyauktaw as much as they need. We also supply around 200 cylinders to Thandwe and Taungup every day. And there are oxygen plants and charities that supply oxygen in other townships. We can cover the oxygen demand.”

On July 31, he walked back those marks in stark terms, acknowledging that the existing oxygen-producing facilities in Arakan State could not keep up with the growing demand.

The medical superintendent of Maungdaw District Hospital, Dr. Nu Kaythi San, said the existing oxygen plant at her hospital is essentially too old to function.

“It breaks down frequently, and needs to be fixed frequently. It has recently been fixed. It can only refill three cylinders [per day]. It is simply not enough,” the medical superintendent told DMG.

Specialist Aung Naing Lin, who is serving at Maungdaw Hospital, wrote on his Facebook: “We have no trouble treating the patients, but it is quite a headache to maintain the oxygen supply.”

If oxygen is not available for patients who need it, doctors can do nothing but watch them die, he said.

Previously, oxygen cylinders were brought from Yangon and Mandalay and sold in Sittwe. However, after Covid-19 infections surged in those cities, oxygen resupply has been halted, exacerbating the oxygen shortages in Arakan State.

The number of Covid-19 fatalities in Arakan State during the third wave of coronavirus has more than quadrupled the combined total of Covid-19 deaths statewide in the first two waves of the pandemic.

A total of 37 people died in the first and second waves between March 2020 and late May of this year. Since then, there were 175 fatalities in the roughly two-month period up to July 30, according to the Arakan State Department of Public Health.

Nationwide, the death toll of Covid-19’s third wave has likewise far exceeded the number of fatalities from the first and second waves combined. Cemeteries in Myanmar’s largest city Yangon have been overflowing with dead bodies since the second week of July.

Many of my friends, when I phoned and asked about their health, told me that they had lost their sense of smell or taste. Some could not cope with the attendant anxiety and died as a result of fear. Anxiety can negatively affect oxygen levels.

There is a need to be judicious about oxygen use, as there are patients who die due to lack of oxygen. Not everyone who is virus-positive needs oxygen. Young people and people with strong immune systems typically can recover without oxygen.

A Bit of Advice

When it comes to breathing, the key is not to panic, but rather to concentrate. You should sit still and breathe in and out regularly. To prevent Covid-19 infection, you need to maintain a well-nourished diet to strengthen your immune system. Get enough sleep. Always follow the instructions issued by the Ministry of Health and Sports. Always wear a mask and interact with others at a distance of at least 6 feet when possible.

At this time, it is best to stay home as much as possible, and avoid going out for unnecessary reasons. Wash your hands when you return. Always use hand sanitiser. You need to protect yourself.

Most importantly, I want people to reduce the stress and anxiety caused by troubling news on Facebook. You do not have to worry too much, even if you are infected with the virus and lose your sense of smell. If you are infected with the virus, take Enervon C, vitacee or Vitamin C 500mg once daily. The most important thing is to eat well and have three meals a day. You may think you’re not able to eat anything because you’ve lost your sense of smell, but you will have to suck it up and shove it down. Because your body has to fight back against the virus, you must eat heartily and healthily to give your immune system the energy it needs for battle.

The death toll from the third wave of Covid-19 continues to rise across Myanmar, yet some people in Arakan State are still more unaware of the pandemic than ever before. While some Arakanese people are walking the streets maskless, civil society groups and others are campaigning for mask mandates, and distributing masks for free.

Oxygen plants are being set up in every township of Arakan State, on a self-reliant basis, to meet the urgent need for oxygen. I urge all to work together in the spirit of nationalism to create public oxygen-producing facilities in Arakan State so that there will be no more “oxygen-starving people” in the future.