An Emerging Nation-State Under the Arakan Army’s Leadership 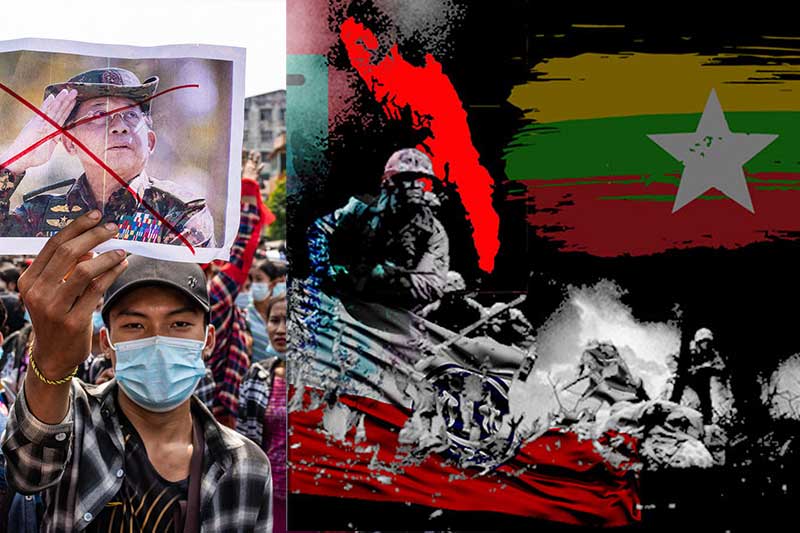 The Tatmadaw (Myanmar military), which seized power on February 1, reorganised itself as a caretaker government on August 1 after more than six months in power as the State Administration Council, and will remain in power for another two years, Senior General Min Aung Hlaing said in a televised address marking six months since the coup.

The Commander-in-Chief of the Defence Services has declared the transfer of state power under Article 427 of the 2008 Constitution. More than 900 people have been killed and more than 7,000 detained since the military coup, according to the Assistance Association for Political Prisoners (AAPP). The AAPP’s figures are disputed by the junta.

The military council has announced the formation of a caretaker government, and appointed state and region chief ministers. The coup leader now serves as the country’s prime minister.

The most important site of China’s BRI is Arakan State, and currently some of China’s most energy-intensive projects, such as the oil and gas pipeline projects, are still operational in Arakan State, passing through the central part of Myanmar to China. Arakan State is a hotbed of conflict unlike any other in Myanmar, while also earning billions in annual revenue for the Union through foreign direct investment.

There is a lot of Chinese investment in Arakan State as well as strong Indian investment. As Arakan State is a geopolitical outlet, it is as important to China as it is to its military and economic power, as well as to India, both geographically and economically. China, which has taken the lead in southern Arakan State, built power plants in Kyaukphyu during the Covid-19 period.

This shows that Arakan State is very important for China, which is developing rapidly globally. Whether or not the Arakanese people benefit from China’s development strategy will have a direct bearing on Myanmar’s political policies. It will still be difficult to reform China’s policies, which have long been criticised for rights violations and exploitation in the face of conflict.

The Tatmadaw has close ties with the Chinese military, and China has close ties with ethnic armed organisations in Myanmar. The caretaker government, which has had difficulty legitimising itself in the international community, is also at risk of gaining Chinese recognition. India, which has good relations with the civilian government and weak ties with the Myanmar military, has so far remained calm but has said it does not accept any action that could cause unrest in Myanmar.

The Kaladan Multi-Modal Transit Transport Project is being implemented in Sittwe to provide direct connectivity from mainland India and the flow of goods to ASEAN markets through northern Arakan State. The project is part of India’s development plans and will also monitor rival China’s maritime outlet. Therefore, India will build a relationship with the Myanmar military’s caretaker government in one form or another, and it will not be in its interest to impose a complete embargo.

If the caretaker government is constitutionally in power, elections will be held within two years and the victorious government will be given the powers of state. However, the caretaker government’s Prime Minister has announced that he will hand over power within 30 months, adding six months to the run-up to the election. Let it be a matter of debate whether it is unconstitutional or not.

The caretaker government, including the military, will be able to write the country’s beautiful history if it can work for peace and the establishment of a new federal democratic union. A model of genuine political dialogue will be needed to end the armed struggle of the people of the states, including the ongoing conflict on the mainland. So far, this has been a dream for the people, and will they continue the prolonged civil war? It depends on the caretaker government whether peace is built and future development is achieved.

Arakan State is also a state that earns billions of dollars annually for Myanmar from foreign direct investment. A main component of China’s Belt and Road Initiative will include Arakan and Shan states, as well as Mandalay and Magway regions, with major pipeline routes passing through these states and regions. China is known for pursuing a one-size-fits-all policy in Myanmar politics.

But the Arakan Army, which has the full support of the Arakanese people, is growing rapidly. The Arakan Army is currently working to enforce the rule of law and reduce crimes. The ethnic armed group’s political wing announced on August 1 that it would administer a justice system parallel to the existing one in Arakan State.

Following the decision, security forces began inspecting motorbikes and cars at intersections in several Arakan State townships, even patrolling some downtown spaces during the daytime.

I see the situation in Arakan State as a step forward with the caretaker government if it results in a genuine political dialogue. However, the caretaker government, which has said it will continue to implement the military council’s five-point plan, has called for the implementation of the Nationwide Ceasefire Agreement (NCA), the fourth point in the process.

The NCA does not seem to be working for the Arakan Army, which wants to create Arakan State as a confederate state. For Arakan State, which is rich in natural resources and is one of the poorest states in the country, independence is a desire of the Arakanese people. Four conditions must be met for a country to stand on its own two feet: It needs (1) a specific territory, (2) a permanent population, (3) a government, and (4) establishment of a communication channel for international relations.

Given the emergence of many new countries after the Cold War, there is little reason why Arakan State, which has historically been a separate country, could not exist as a sovereign entity. However, it is true that there may still be challenges in overcoming the situation that has existed for many years under the Burmese Empire. The above four points will be the most important for a country to stand on its own two feet.