A Country Where the Rulers Are Poor (satire) 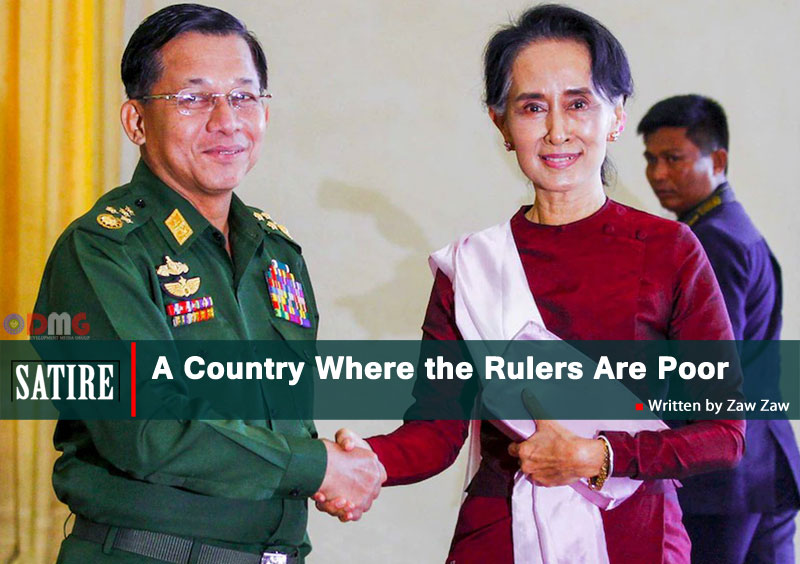 The people of the Danaratha Kingdom, where we live, are greedy and economically competitive, but the ruling class suffers from a variety of hardships because they live honestly, without corruption.

However, the ruling class did not use the profits from the extraction and sale of natural resources for personal gain, but rather for the construction of roads and bridges for the benefit of the people.

There is an abundance of resources and a large community of trustworthy people in the western part of our country.

Large-scale resource extraction in eight parts of the country is not controlled by the ruling class but by the people. Only then will the people be rich.

Once upon a time there was an epidemic, and some people even threw their clothes into the rivers because of a dream or statement from a believer. It is not easy to defeat the ideologically Western group, and the king, who is so poor in the country because of the devastation of the rebels, is also saddened.

Danaratha means a country rich in wealth. The king also said that whatever the cause, he would pay for it. Every summer, the biggest problem in our country is drinking water scarcity. The matter was reported to the king again by the governor and minister, but no reason was given.

But the solution to the problem is also mysterious. A single statement addressed the issue. The full statement is as follows:

The statement reads that it should be informed that the Minister should solicit donations from rich people in the region to solve the water scarcity problem as soon as possible. However, the ministers realised that there was only one king who could easily solve a problem. They decided that if they faced such problems in the future, they would obey the king’s orders.

Another epidemic struck, with donations from the people, as planned by the king. The king also tried to organise organisations that tried to produce their own medical supplies. Only later did the king cancel the programme, in the face of public outcry.

On one occasion, homes and buildings were destroyed by a typhoon in the Danaratha Kingdom. At that time, the king was so fond of clothing that he began to wear a white robe instead of his green robe.

Since then, it has become a tradition to feed the people affected by natural disasters with generous donations from rich people.

The king’s mother and the current king, who took note of such plans, followed a similar suit.

During the summer, water shortages are common, and floods occur during the rainy season. But the problem-free king has easily solved the problem and the way is ready.

If there is a problem, let the people donate in the same way as before. It was resolved by an immediate order because the rulers are poor. No matter how poor the rulers were, they had only two sets of clothes to wear. The rulers were so poor that they had to take off their green robes with tongues and wear only white robes and hats. White and green are their only clothing colors.

The kindness of the rulers toward all people is exemplary. There is no ban on social media sites that criticise the ruler. No action was taken against those who criticised their actions. No suspected arrests or torture of those suspected of being insurgents were carried out, and no heavy artillery was used on peaceful protesters. Under the command of a benevolent king, the subordinate armed forces under the royal army did not think of disobeying orders.

However, the royal army was found to be relentlessly obeying orders given without suffering.

The family members of the ministers of the Danaratha Kingdom were too poor to run big businesses and lived lives of starvation.

In any case, it is not unusual for the king to be content with the wealth of the people. In the minds of the people who heard the king’s groaning, their hearts were filled with joy.