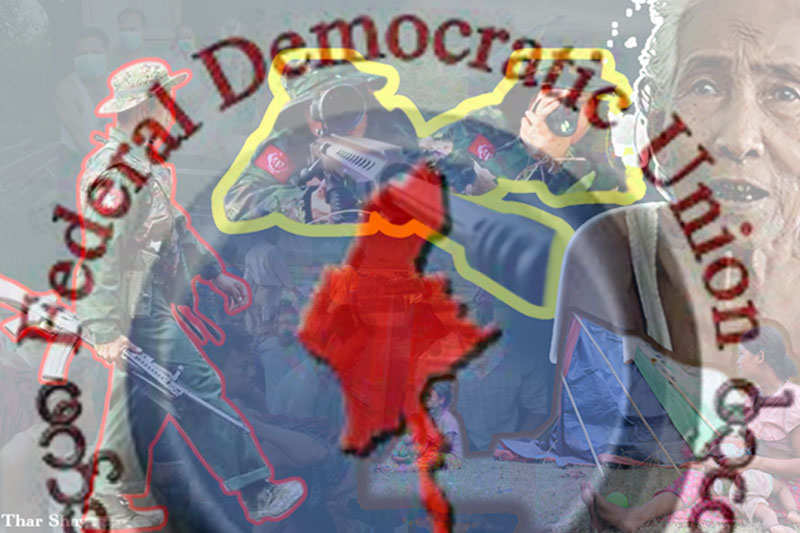 The current political situation in Myanmar is complicated. The violent crackdowns on peaceful protests across the country after the military seized power has led to an armed uprising.

The revolutionary forces also want to establish a “federal democratic union” through the current political system, and the Myanmar military is planning to wield a proportional representation (PR) system to its advantage in the next elections.

Democracy is a controversial term in different contexts. But in general, democracy is a political system with free and fair elections. It is also accepted that in a democracy, fundamental rights and human rights, including those of minority communities, are protected. In addition, clear distinctions between an independent media and an executive branch, legislature and judiciary, is considered a key component of a democratic system.

As a result, the previous system in Myanmar was referred to as a democratic government. However, this democracy did not suit the people. Despite the constraints of the Constitution, the military can manipulate state power at will.

It must be said that this was not a good democracy. The National Unity Government (NUG) and the People’s Defence Forces, which are opposed to the military council, have informed the people that they will overthrow the military dictatorship and move toward a federal system.

Federalism is a very broad and controversial term. However, it has been observed that it is generally a form of decentralisation under general autonomy.

Myanmar federalism would include a clear division of power between the union level, the region/state level, and the township level. As a first step in the separation of powers, each level of government in the country, according to the federal principle of autonomy, would have constitutionally guaranteed powers.

Secondly, federalism includes the principle of shared governance, and all levels of government working together to make joint decisions. As a result, the federal system consists of at least two levels of government. There is a central government that governs the whole country on issues that are important to everyone. These include issues such as defence forces, foreign policy, trade, citizenship, large-scale economic projects, ports and airports.

A key feature of federalism is constitutional agreements that allow different communities to live together in the same country. These agreements protect the right to self-government of different peoples and at the same time recognise unity.

There are fears that federalism will lead to secession because of the autonomy of an area. However, in most federal systems, the boundaries of the state are clearly defined in the Constitution. In addition, a federal system can provide practical control over the disintegration of the state.

In other words, federalism can be seen as decentralisation, but it differs from country to country, ideally to suit the realities of the countries concerned.

Federalism is more complicated than other political systems. There are many government-level organisations in the federal system such as the central, state and township levels, down to the relevant offices. As a result, the costs of a federal system for poor countries are a heavy burden.

For example, in a country, public opinion does not always prevail. Although the federal system is supported by the majority, there may be delays and vetoes by regions or states.

Although ethnic groups can somewhat successfully be divided into autonomous regions, minorities within a minority group may still be discriminated against. When a region or state is defined by geographical characteristics, other minorities from different groups will also be included.

In different parts of the world, federalism is governed by a variety of systems of design, and there are differences of opinion. In the United States, the government has executive, legislative and judicial branches at the state and national levels. In all 50 states, state legislators and governors are directly elected by the people.

Ideally, a federal system must be based on harmonising the history and culture of the respective nation it is applied to.

The system used by successive regimes, and former President U Thein Sein’s administration and the National League for Democracy (NLD) government that followed, is centralisation. Union taxes are drafted by the Union Central Committee and approved by the Pyidaungsu Hluttaw.

This is what Myanmar calls a democracy, but in reality it is a path that has been centralised. Centralisation is usually the consolidation of powers and responsibilities within a political authority and all decisions are made by a central aka “union” government. Myanmar has been involved in this type of system for generations.

Although federalism refers to the division of powers between the federal government and the states/regions for the most part, decision-making powers tend to be concentrated at the union level.

The NUG is pushing for a federal army, with the aim of overthrowing the dictatorial military council and creating a People’s Defence Army. Post-coup devastation and civilian casualties continue on a daily basis. As a result, the Myanmar people are eagerly awaiting the formation of a new government with a federal army to truly protect the people.

However, the establishment of an all-ethnic federal army still requires much negotiation of a politically acceptable federal framework agreement. The NUG predicts that once a federal democratic union is established, it will be able to replace the current military council with a federal army.

During the more than 70-year civil war in Myanmar, the EAOs’ peace efforts focused on building a federal union based on equality and self-determination.

The movement against the current military dictatorship, along with nullification of the coup government, abolition of the 2008 Constitution and formation of a new federal constitution, could coincide with the overarching goal set by the EAOs.

The NUG has said it will form a federal army and has said that some EAOs are involved, but some EAOs have not yet joined. This may be due to the fact that there has been control at the union level and may not be in line with the policy position of some EAOs.

At the moment, the EAOs’ efforts to bring peace and the goals of the Spring Revolution have come together, and a new union can be hoped for.

On the other hand, the EAOs, the NUG and PDFs share the same goals of overthrowing the military dictatorship, but it is important that the revolutionary forces on the Myanmar mainland emerge after the military coup and the EAOs agree on a federal democratic pact. As long as the military dictatorship remains in power, Myanmar’s political federalism and pro-democracy movement will continue to be complicated.