Lessons From History for Self-Determination in the 21st Century 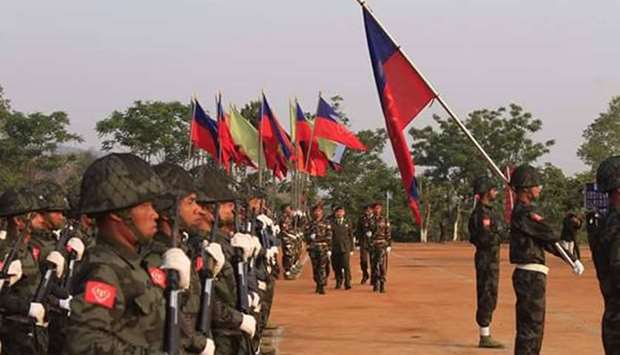 You may have heard of the famous Arakanese King Min Htee in the Lay Myo Era of the Arakanese people. King Min Htee ascended to the throne at the age of 7 and sat on the bosom of his uncle Anantabaya and ruled the country with love for his people.

From the day King Min Htee ascended to the throne, he issued five decrees and ruled the country. The people were shocked when King Min Htee issued these decrees.

Meanwhile, two slaves of a rich man were arrested for stealing and killing a cow. So the rich man, the lord of the slaves, was so frightened that he approached the king’s uncle, Anantabaya, and offered him a thousand pieces of silver coins, and asked him to be the master of the detained slaves. Anantabaya believed, “My nephew, who sits on my lap and rules the country, cannot kill me.”

However, Anantabaya was wrong. King Min Htee sat on Anantabaya’s lap and ordered his uncle to be killed because of the facts of the case. Therefore, the people praised the impartial King Min Htee as a just king and won the love and respect of the people.

In any age, the ruling class does not have to be divided. The ruling class ought to rule with justice, fairness and integrity, following in the footsteps of King Min Htee. Only then will the rulers be loved and respected by the people, and the administrative machinery might therefore endure.

The years after 2015 were full of bad and good things for Arakan State. There were misfortunes as well as lucky results. However, those past days are also the future of Arakan State. The long-awaited ray of light that Arakanese people have been waiting for is not yet visible; indeed it is vague.

All organisations, from the revolutionary army to charities, need public support. Even a funeral service can find it difficult to obtain an ambulance without public support. Everyone understands that business ventures can only be successful if they have the support of the people. Gaining public support is also the result of good deeds.

The Arakan Army (AA), which is currently fighting for the independence of Arakan State, is one of the most popular organisations in the country. In addition, most townships in the state have Arakan Army influence and even the administrative machinery is actively influenced.

Such influence is based on the rulers, because the people trust and respect the rulers. The Arakan Army has formed the Arakan People’s Authority and United League of Arakan (ULA), and is in charge of much administration in Arakan State.

In some countries, the ruling class is intoxicated with power, abusing its power if it enjoys the popular support of the people and sometimes violating its own decrees. The ruling class often acts arbitrarily, ignoring human rights and justice.

Doing so disregards the public. There is no reason why these people, who are born of the people, should not care about the people. It is important to deal with biases and injustices, and to govern the people in a systematic way.

In any case, it is important to rule with justice in the eyes of the people. Rulers, like Arakanese King Min Htee, need to be just and determined to work for the truth.

One day, King Min Htee saw the betel lime on a palace pillar and asked who had made it. A minister gave a well-documented account of the day and time when the King himself painted the palace’s pillar with betel lime. So King Min Htee put his finger on the pillar and cut it with his royal sword.

The king himself, who issued his own decree, cut his finger and taught a lesson in justice. In the same way, even if you make mistakes, you will be punished and you will have to correct them in the future. We should dispel the misconception that a ruler makes a mistake and nothing happens.

History is a lesson to be learned, and there are many bad things in history. King Min Htee’s reign has taught his successors history lessons, so that they might rule the people fairly. The future journey for Arakanese people is a long and unfinished one. No one knows for sure when the golden future will come, but a new future is in sight.

Today is a time to walk on the sword. In such a time, mistakes cannot be made.

If the system is not good, the people will criticise. As a result, when rulers make mistakes, they need to be corrected and governed in a systematic way. We must be able to eradicate prejudice when we have power, and we must put the welfare of the people first.

The Arakanese Kingdom came under the control of others due to a lack of unity among the Arakanese people. The Mrauk-U Golden Palace, which once shone with a golden hand, was destroyed. This is a lesson in the history of the people, who have lost their sovereignty because of a lack of unity. That historical lesson could be a mirror into the future.