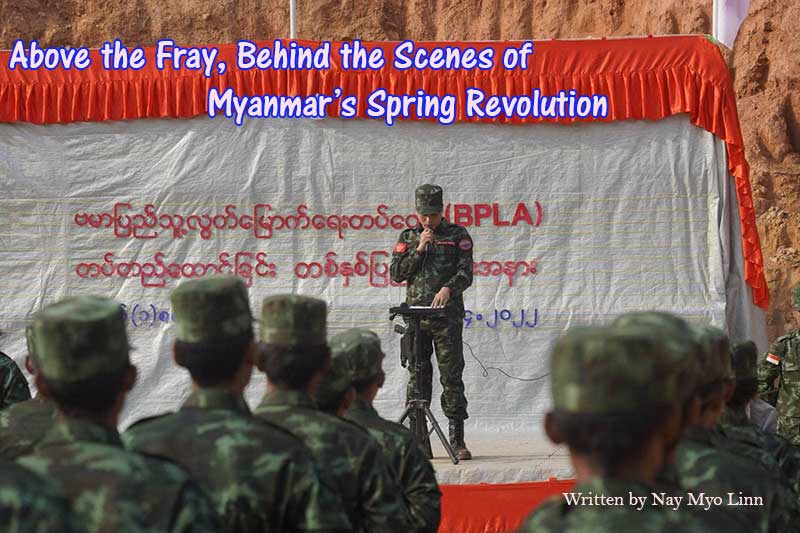 Criticism also arose because the Arakan National Party (ANP), a powerful political party in Arakan State, signalled in the coup’s aftermath that it was willing to work with the regime. The junta appointed Daw Aye Nu Sein, a top leader of the ANP, as a member of the State Administration Council, and another senior member, U Zaw Aye Maung, as a deputy minister at the Union level.

Protests in Arakan State townships were called off after a series of arrests of demonstrators. Across the country, opposition to the military coup has not ceased, but in many ways has evolved from the street protests that characterised the early post-coup resistance. When street marches were met with bloody crackdowns, anti-regime militant groups known as People’s Defence Forces (PDF) emerged across the country, taking up arms against the Myanmar military.

Due to these factors and more, Arakan State remained relatively stable for more than a year after the coup, as much of the rest of the country descended into chaos. The Arakan Army, which has gained much support from the Arakanese people, wants peace for previously war-torn Arakan State, which still has tens of thousands of internally displaced people (IDPs) and countless more lives still grappling with the conflict’s aftermath. For its part, the Myanmar military likely does not have much appetite for renewed hostilities with the powerful Arakan Army as it battles anti-junta armed groups across large swaths of the country outside of Arakan State.

However, the Arakan Army surprised its critics on April 10, the 13th anniversary of the founding of the ethnic armed group. It was the first time that the Arakan Army’s behind-the-scenes role in the Spring Revolution was made known.

Revolutionary forces and various other organisations sent messages on the 13th anniversary of the Arakan Army’s founding. Among those sending felicitations were resistance groups that emerged from the Spring Revolution. And in some of those messages were expressions of gratitude for the AA’s support of their anti-junta cause.

The Arakan Army has helped at least four revolutionary groups that we know of so far.

The Bamar People’s Liberation Army (BPLA), led by prominent human rights activist and poet Maung Saung Kha, wrote in one message that the Arakan Army, along with other allies, was helping to make the BPLA a success.

In addition, an armed group formed by members of the University Students’ Union (Yangon) said they had received support from the Arakan Army, including basic military training in areas under AA control. The People’s Revolution Alliance (Magway) and Mara Defence Force (MDF) also sent messages on the AA anniversary, stating that the anti-regime forces had received weapons, training, military support and tactical advice from the Arakan Army.

In light of the above, it can be said that the Arakan Army has been a participant in the Spring Revolution, assisting organisations in their fight against the regime, even though no fighting directly related to the coup has taken place in Arakan State.

On the other hand, conflict in Arakan State between the Myanmar military and the Arakan Army could be rekindled at any time, the ethnic armed group’s spokesman has warned.

Fighting between the Arakan Army and the Myanmar military raged across Arakan State and in parts of neighbouring Chin State from late 2018 to November 2020. But aside from a handful of skirmishes, the two sides have largely maintained the informal peace accord that they reached toward the end of 2020.

The two sides appeared to come one step closer to consummating an alliance on May 16, when they held a virtual meeting. It came nearly two months after the NUG invited the Arakan Army to informal talks on March 24.

Ten days later, the Arakan Army and Myanmar military clashed in Paletwa Township, Chin State. It was not the first fighting to take place between the two sides since they reached their informal ceasefire agreement toward the end of 2020, but tensions are described as being higher than at any time since the active conflict period.

With the Arakan Army’s behind-the-curtain support for the Spring Revolution now out in the open, it will be interesting to see how the ethnic armed group chooses to position itself politically; between the Myanmar junta and the NUG, both fighting for hearts and minds in mainland Myanmar, it must find a place.