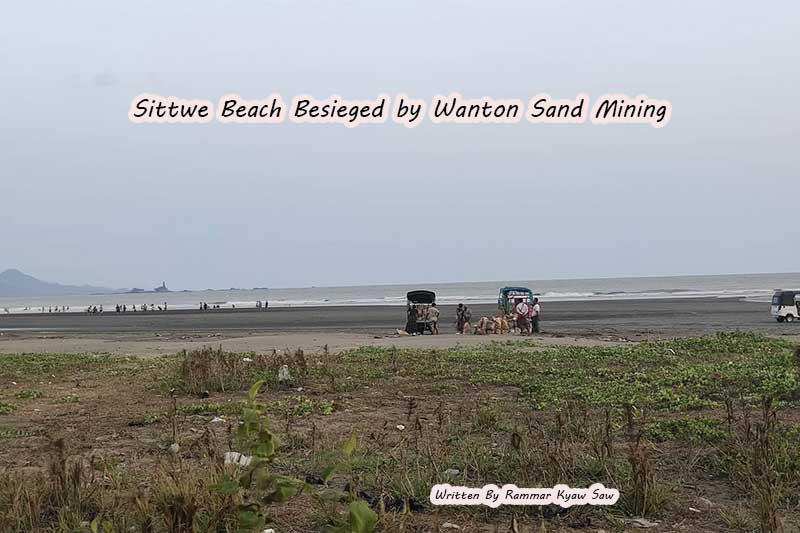 Every day, many residents of the Arakan State capital Sittwe wake to the sound of horn blasts and roaring engines from sand-carrying dump trucks that drive at high speed down to Sittwe Beach. Some in the neighbourhood have even grown used to those noises as part of their daily life.

Sand-laden dump trucks, with a capacity to hold around 200 cft of sand, usually operate 10 times a day, it is said, and around 400,000 cft of sand from Sittwe Beach is hauled away daily.

At its core, Sittwe is an estuarial island landmass, created from the confluence of the Kaladan, Mayu, and Lay Mro rivers emptying into the Bay of Bengal. And every year, the silt deposited by those three rivers forms a sand deposit that is collectively known as Sittwe Beach.

Sittwe is a state capital, but there are admittedly not many attractions drawing visitors to the city. Shu Khin Thar Street and Sittwe Beach are the most popular places among Sittwe residents. However, Sittwe Beach is now dotted with craters due to excessive and unregulated sand mining.

The business of beach sand mining seems to be booming in Sittwe, with hundreds of dump truck loadfuls of sand being mined by commercial sand manufacturers daily and small-scale sand manufacturers transporting sand from the beach with auto rickshaws as they wish. The routes used by these sand-laden vehicles are covered with wet sand that becomes practically indistinguishable from mud, marring the image of the city.

Whether in the morning or evening, intense sand mining operations are a common sight at Sittwe Beach.

As proper sportsgrounds are scarce in Sittwe, teenagers usually play football at Sittwe Beach. But the beach is being degraded daily, and teenagers are seeing their playground gradually taken away by sand mining.

The sand mining of Sittwe Beach appears to be carried out by both authorised and unauthorised profit-seekers.

The sand deposited by the three rivers can’t be more than 400,000 cft per day, but nearly the same amount is being removed every day, and there is a need to impose a limit if the beach is to be conserved for posterity.

It is not clear if municipality authorities do not bother, or do not have the capacity, to regulate sand-carrying dump truck drivers. But the only obvious sign of municipal involvement is the city workers cleaning up after the drivers along Sittwe’s sand-covered roads.

With the current school year in full swing, drivers of the sand-laden trucks need to be careful. Many drivers of these trucks, as we can see, are better described as racers than heavy load truckers, which is of concern to all pedestrians, including students.

Most of the sand extracted from Sittwe Beach is used for landfilling. Although the type of sand on Sittwe Beach should not be used in construction, it is seen to be used at some construction sites, which is a concern for high-rise buildings built on a foundation that contains this type of sand.

I think not only local authorities but also civil society organisations need to be educated about the ongoing, reckless sand extraction from the beach. The beauty of the beach can only be maintained by preventing excessive sand extraction.

Sand buyers pay between K50,000 and K60,000 for a sand-filled truck, which brings significant economic opportunity to those who have the right to extract sand. Because of these lucrative incentives, hundreds of trucks are extracting sand every day.

In Sittwe and across Myanmar, businesspeople have worked with authorities to extract and sell natural resources, all too often in ways that are not above board, do not benefit local populations, and do environmental harm. There is nothing wrong with running a normal business, but it is important to prevent excessive extraction and exploitation of natural resources.

Sittwe Beach is deteriorating, and if it is not protected in time, it will affect the coastal ring road. Due to the ebb and flow of the tide at Sittwe Beach, water is eroding areas that were not subject to these forces before. If sand mining continues unchecked, will the coastal spaces where we gather to relax, socialise and play football be washed away completely?