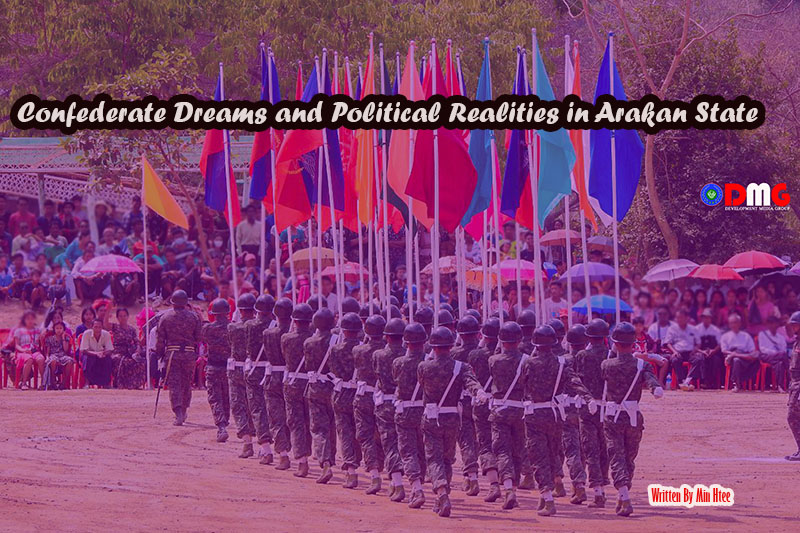 After the commander-in-chief of the Arakan Army (AA) revealed, at the 30th anniversary of the founding of the United Wa State Army (UWSA), the Arakanese ethnic armed group’s ambition to establish a confederate-status Arakan State, it caused a commotion in political circles.

The AA spokesman’s subsequent statement at an online press conference of the ethnic armed group on August 11 caused a further political storm not only in Arakan State but also in Myanmar’s broader political sphere.

The Myanmar military and the AA had observed an informal ceasefire since November 2020, after two years of often-intense fighting starting in late 2018. Military tensions arose early this year, but the AA had used the lull in hostilities to establish its judicial system, which has made considerable progress.

With the AA expanding its administrative mechanism, complete with a judicial system and tax collection apparatus, across Arakan State from late 2020, junta-run police forces and courts became barely operational. This shows the public support for the AA and the ethnic armed group’s growing influence.

The AA has seized junta personnel, and the regime has also detained residents it suspects of having ties to the AA. The regime has increased its security presence in Arakan State, and conducted increased patrols in an attempt to re-establish its control. After the regime carried out a fatal air raid on an AA outpost in Kayin State, the Arakanese ethnic armed group ambushed a junta vehicle in Maungdaw Township.

The AA has so far rejected the regime’s proposed peace talks, but it has publicly met the parallel National Unity Government (NUG), which emerged after the coup. Neither side revealed whether they had reached any concrete agreements, however.

Meanwhile, another Arakanese armed group, the Arakan Liberation Party/Arakan Liberation Army (ULP/ALA), did attend peace talks with junta boss Min Aung Hlaing. The ALP reconstituted its senior leadership earlier this year, but it has not yet made any significant political or military moves.

Tensions arose between the ALP and the AA after ALP senior figure Khaing Paw Lin was seized by the AA in early August. Tensions escalated after the AA said at a recent press conference that it would work to achieve confederate status for Arakan State and that there must be only one armed group representing Arakanese people in Arakan State.

The ALP detained some individuals with alleged ties to the AA in retaliation for the arrest of Khaing Paw Law, reported local media. There have also been allegations on social media that the ALP is operating in partnership with junta troops in Sittwe, where it is based.

ALP spokesman Lieutenant Colonel Khaing Kyaw Soe said in an interview with Voice of Myanmar that the ALP is heading to federalism through peace talks, and that the ALP’s ambition is federalism. The ALP has criticised the AA’s demand for confederate status, and its principle of a single army in Arakan State shows that the AA does not understand politics, the ALP has said.

There have also been reports that the ALP is running courts in the Arakan State capital Sittwe, the administrative seat of the military regime. The AA has less influence in Sittwe, though it has control over much of Arakan State, where it has an operational judicial system in several townships.

When the ALP entered Arakan State to gain a foothold, it was welcomed by thousands of Arakanese people, and it was an ethnic army that received the full support of the public. However, the ALP’s politics within the NCA did not bring any hope to the Arakanese people, and the ALP was unable to organise any Arakan politics.

There is no public support for the ALP to take justice into its hands in Arakan State. If the ALP is going to do justice in Arakan State, it should at least announce it publicly. The ALP’s secretive judgements, without public announcement, are also a matter to be considered as it could be insulting to the public.

Even an organisation like the AA, which enjoys near-full public support, will hear some public discontent when undertaking judicial functions. Therefore, the ALP can automatically enter the enemy’s playing field, not for Arakanese people.

Another thing is the role of Arakanese political parties. After 2010, the Arakanese people urged the Rakhine Nationalities Development Party (RNDP) and the Arakan League for Democracy (ALD) to merge in order to build national interests and unity in democratic politics, and thus the Arakan National Party (ANP) emerged.

The RNDP Chairman Dr. Aye Maung became the chief of the ANP, and the top leaders of the party had major disagreements, and Arakan League for Democracy (ALD) party leaders broke away again. Dr. Aye Maung, who has focused on building personal influence rather than party influence, also founded another party and announced its intention to contest in the 2020 election. Dr. Aye Maung was imprisoned for many years for treason because of some expressions that ran afoul of the law in a literature talk, and was released after the military seized power in February 2021.

Dr. Aye Maung tried to replace the Arakan State conflict with the peace process offered by the Military Council. However, it does not appear that he discussed it with the Arakan Army. Dr. Aye Maung, who came to prominence alongside discussions about federalism in parliamentary sessions, is currently back in the media as leader of the Arakan Front Party (AFP).

In the immediate aftermath of the military coup, the activities of the ANP were not seen much, while the AFP focused on party building. In a Dr. Aye Maung interview with the media earlier this year, I noticed that he came to examine the Arakan Army’s politics with some questions.

I noticed that he raised questions such as what is the politics of the Arakan Army and whether the Arakan Army no longer needs peace. Therefore, it is believed that this time, at the press conference of the Arakan Army, the AA spokesman’s side came out with a stronger attitude and expressed its confederation ambitions. The AFP also saw the way the Arakan Army wanted to go politically, side by side.

At present, we cannot clearly see the attitude and politics of the Arakanese political parties. Although Arakanese political parties are almost certain to participate in the election to be held by the military junta next year, it is believed that the ALD, which has strongly opposed the coup, will not participate. The ANP is still playing along with the military junta, critics and observers say.

The Arakan Army’s goal of working toward a confederation for Arakan State has not yet been announced formally or with fanfare, due to the current Myanmar political crisis and revolutionary machinations across much of the country.

In conclusion, I see it as an important time for political parties to consider national interests before reaching the point of whether they will support or oppose the Arakan Army’s confederation dream. For this reason, it is necessary for the Arakan Army to open the way for discussion between Arakan political parties and other relevant political and social forces to help lead the way with clear and strong political convictions, directed toward the national interest rather than the interests of any given organisation.

I don’t think that this period should be considered merely as a critical juncture for Arakan politics; and ideally this moment should not lead to Arakan political division and conflict, nor is it a time for mutual critique. At this time, the Arakan Army’s political goal has received the overwhelming support of the Arakanese people, so supporting the leadership of the AA for the future of Arakan State is the only solution in view.