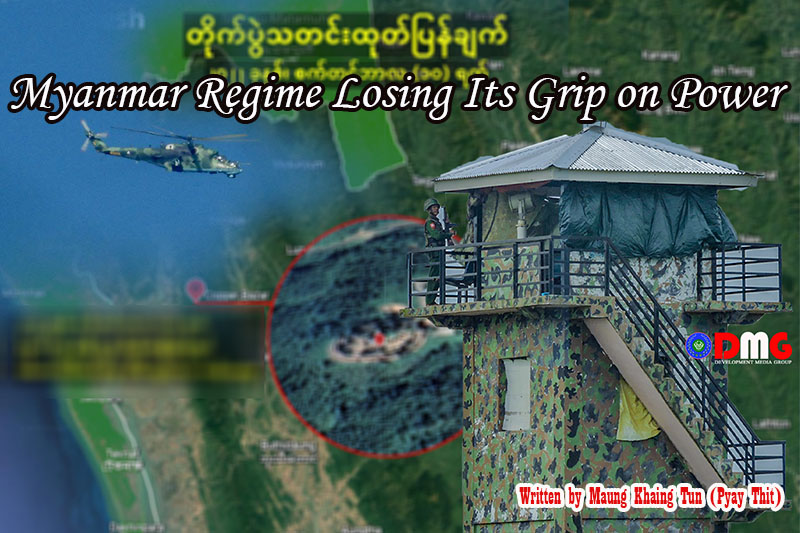 Myanmar’s armed conflicts between the military regime and resistance forces have intensified day by day. A steep depreciation of the kyat, and resultant increase in commodity prices, is taking a heavy toll on Myanmar people. The regime is increasingly isolated by the international community, including neighbouring countries and fellow members of the Association of Southeast Asian Nations (ASEAN). It is fair to say the regime is suffering heavy losses at war inside the country, and is facing a diplomatic crisis on the international stage.

The military coup on February 1, 2021, prompted anti-coup protests across the country. The regime’s subsequent and brutal crackdown on peaceful protesters led to a nationwide, armed resistance. Since the time of General Ne Win, who staged the first formal military coup in Myanmar, successive dictators including current military chief Min Aung Hlaing have exploited soldiers for their personal interests.

Thanks to Min Aung Hlaing’s stupidity, the Myanmar military today faces strong resistance from the entire Myanmar people. The military is facing a recruitment crisis as its atrocities have won it deep loathing from the people. Its morale has been in decline due to heavy casualties amid daily clashes with resistance groups. Instead of backpacks, they are equipped with bamboo baskets. Poor supply routes for food has also negatively affected the combat capability of soldiers, many of whom are rather too old to fight.

Previously, soldiers were allowed to quit the military if they could find a recruit who would fill the gap left by them. The regime, however, has been forced to buy recruits, and recruits are still scarce even if it offers up to 3 million kyats for a new recruit, according to local media.

It is indisputable that this is how the Myanmar military will end up. In the aftermath of the coup, Min Aung Hlaing attempted to enact a law that would make it mandatory for citizens aged 18 and above to join the military service. But later, Min Aung Hlaing apparently realised that all the young people covered under the declaration also have the chance to join resistance groups under such a law, and so perhaps only accelerated the regime’s defeat under the law.

The regime announced that it would hold a new general election within two years of its takeover. However, some 20 months after the coup, the regime is still struggling to protect itself, not to mention safeguarding public security. The imposition of a nighttime curfew in the administrative capital Naypyidaw, announced on September 22, is a testimony to that fact that its legitimacy is under growing threat. In Bamar-majority areas that had not seen armed revolution before last year’s coup, civilians are being killed for various reasons daily. The regime itself is killing civilians in the name of counter-insurgency operations, and it has torched numerous villages across the country.

There are reportedly more than 600 People’s Defense Force (PDF) battalions in Bamar-majority areas fighting the regime since it seized power on February 1, 2021. PDF groups are gaining increased control over territories in their regions, and the regime has had to rely on old, exhausted soldiers to fight them. With its ground troops increasingly weakened by the continuous fighting in many parts of the country, the regime has had to rely increasingly on the Air Force.

Far from crushing the resistance movement, it appears that the regime is struggling to prevent itself from being hanged.

The fact that former Brigadier-General U Ohn Thwin, who had served as ambassador to four countries and was also a principal to the current junta chief, and his son-in-law U Ye Teza were killed by resistance fighters at their homes in Yangon, shows that the grave is everywhere for current and former junta personnel, and that the security apparatus of the regime is broken. At the same time, the assassinations show that the urban guerilla warfare of the resistance is progressing.

There is a saying in Myanmar that power comes from the barrel of a gun. For many years, the Myanmar military ruled the country with fear. Myanmar’s military has long been notorious for killing civilians, and using sexual violence as a weapon of war in ethnic areas. Since the coup, the military has torched countless numbers of peoples’ villages and towns. Privates of the Myanmar military are brainless to understand ethics.

The military junta has had to relinquish some of its territories since 2022, and the guns of the military council members cannot go everywhere. The military council has lost most of the country’s rural provinces and areas to anti-regime forces since its coup, and the regime is failing to protect its soldiers on the ground.

In this situation, the military council has undoubtedly taken out loans to cover the costs of moving its soldiers here and there, without getting accurate information as to the costs of bombs and other incendiary devices deployed against its people.