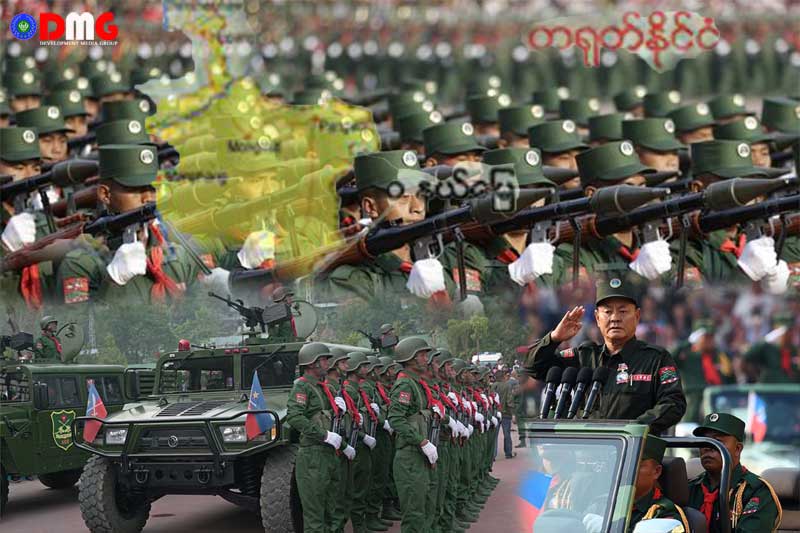 Military leaders of successive periods have variously called ethnic armed revolutionary groups demanding equality “rebels”, “insurgents”, and “terrorists”. They have demanded that ethnic armed organisations (EAOs) disarm or transform themselves into Border Guard Forces or militias that are effectively under the control of the Myanmar military. But the current regime has also made concessions to some powerful EAOs that are not engaged in active fighting with the Myanmar military.

The UWSA controls its own territory — known as Wa State — in northern and southern Shan State, and has an estimated 30,000 soldiers and a sophisticated arsenal of weapons, as well as maintaining close ties with China.

The regime has agreed in principle to grant the Wa region statehood.

The UWSP/UWSA were formed in 1989, after ethnic Wa soldiers split from the now-defunct Communist Party of Burma. The UWSA signed a ceasefire with the then military regime on May 18, 1989, but refused to transform into a BGF. There has been no fighting between the two sides since then. The UWSA signed state- and Union-level ceasefire pacts in 2011 under U Thein Sein’s quasi-civilian government. However, it has opted out of signing the Nationwide Ceasefire Agreement (NCA) to date.

The UWSP is currently led by Bao Youxiang and his deputy, Bao Youyi. With a population of more than 600,000 people, Wa State is under the de facto control of the UWSA, which runs its own administrative offices, courts, hospitals, schools, a broadcasting station, municipal services and tax collection.

The UWSP says it wants to cooperate in the peace and stability of the Union with complete self-determination. UWSP leaders have said that Wa State will not secede from the Union, but the UWSP will manage their state independently except for national defence and diplomatic relations.

While much of the country has risen in revolt against the February 1, 2021, coup, Wa State is the only territory in Myanmar not to be significantly affected by the nationwide turmoil. UWSP leaders have described the post-coup crisis as an internal issue of the Bamar ethnic people, saying the UWSP/UWSA would not take sides as it does not want to see its involvement causing further conflict.

Under successive governments, the Wa Hills of northeastern Shan State have never been ruled by any central Myanmar authority.

The UWSP is headquartered in Panghsan, also known as Pangkham, which is part of an area that the UWSA refers to as northern Wa State, covering around 1,500 square kilometres and bordering China. The UWSA later expanded to Monghsat District on the Thai border, in the 1990s. The area is referred to as southern Wa State, designated by the UWSA as Military Region 171.

The Panghsan headquarters is protected by brigade complete with an artillery unit, anti-aircraft unit, drone unit, sniper unit, commando unit and other formidable defences. The UWSA also has militia groups scattered across other parts of Wa State. The UWSA also has its own ordnance factory.

Though the UWSA-controlled area is technically identified as the Wa Self-Administered Division under Myanmar’s 2008 Constitution, the UWSA and Wa people refer to their territory as Wa State.

The Wa people have been persistently demanding state status since 1990, and have reached some consensus; it can be said that their main political goal has been achieved. However, other challenges remain, including achieving a parliamentary route to officially delimiting the Wa region at the state level.

In addition, there are still matters to be done step-by-step, such as obtaining the opinion of the Union parliament and the president. Will the military junta give full support in working through the parliament to give the Wa region state status?

According to the Constitution, Myanmar has been incorporated under the federal system of government with seven states. Looking back at the powers of the states, under central control, the name of the state government is more than a name of access rights.

For example, the ANP, which won the most seats in the Arakan State elections during the National League for Democracy (NLD) government, asked to be allowed to form the state government and appoint the chief minister, but the people’s wishes were ignored and the Union government directly appointed the person they wanted.

If the Wa region is officially designated as a state, will Myanmar’s central government still control the administrative balance of the Wa, as is the case in the currently existing states?

Wa leaders have promised the Union government that they will not separate from the Union, on condition that the central government not involve itself in Wa State’s internal affairs except in terms of foreign relations.

At present, if the Wa region becomes a state independent of the Myanmar authorities, it will have far more powers than the existing seven state governments. It is conceivable that the political path of the Wa people will become the first official state government in the history of Myanmar where the confederation level is beyond federalism.

In addition to this, as the leaders of Wa have already established the powers of a state government, it is interesting to consider whether there will be a situation of civil and military tensions between Wa and future Myanmar governments. Furthermore, if the pioneering Wa effort at autonomy achieves a new political path free from the control of the Union government, it is inevitable that the rest of the ethnic armed groups will also seek to march along a similar path.

If we consider the promising status of Wa State, the most important thing is that the Myanmar military leaders have given concessions to the ethnic armed groups who do not want to fight because they are facing numerous crises in mainland Myanmar.

It is worth noting that the regime told the Pa-O National Liberation Organization, Lahu Democratic Union and Arakan Liberation Party, which have held peace talks with the military junta, to join the army or Border Guard Force.

Considering that the military council agreed in principle to designate Wa region as a state and Mongla as an autonomous region, looking at the background strength of these groups, there is a question as to whether it is discrimination on the part of the military council.

According to the opinion of the Wa leaders, the governance of mainland Myanmar is a matter for the ethnic Burmese to sort out. They defend their stance by noting that they have largely achieved their political goals in various ways.