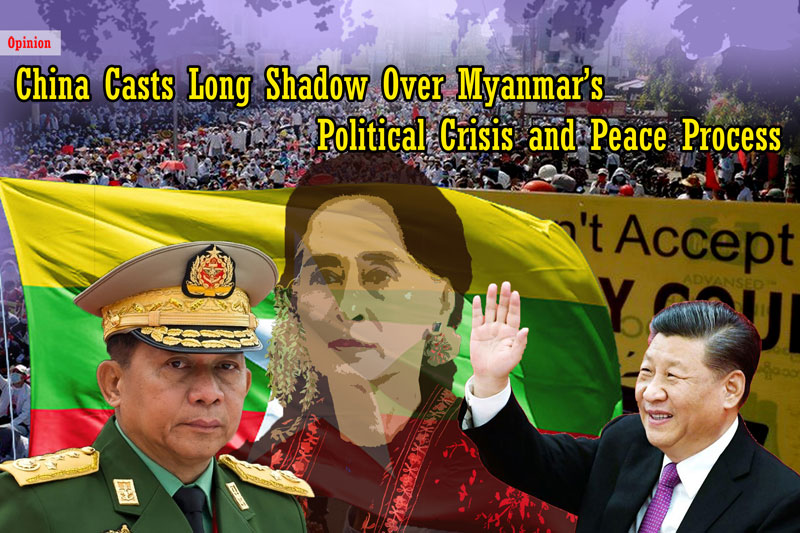 Myanmar has been in total chaos since the February 2021 military coup, and is experiencing diplomatic isolation. The military regime, which calls itself the State Administration Council, has been excluded from the annual summit of the Association of Southeast Asian Nations (ASEAN), of which Myanmar is a member.

The majority of ASEAN members are disappointed that the regime has failed to implement the five-point consensus that was adopted by the regional bloc in April 2021. Several foreign firms have abandoned their operations in Myanmar following the coup and the country is spiraling ever deeper into poverty, with high unemployment and shrinking foreign direct investment. The value of the kyat has cratered against the U.S. dollar since the coup, and the country is experiencing unprecedented inflation.

Myanmar’s neighbour China, a global superpower, has neither publicly criticised the coup nor imposed sanctions against the regime. It has been tight-lipped about junta atrocities against its civilians as the regime continues to torch villages, arbitrarily detain people, and commit extrajudicial killings.

Since General Ne Win seized power in then-Burma in a 1962 coup, Beijing has defended successive Myanmar military dictators on the international stage, ignoring their poor human rights records. China’s support was not free, however. The generals let China exploit the country’s natural resources, including gas, timber, jade and copper, in exchange for its diplomatic support and investments in the pariah nation.

Thanks to former military dictator Than Shwe, China has obtained significant oil and gas field concessions off the coast of Arakan State. And it has also won contracts in principle for various other projects in Arakan State.

Xi also had close ties with the elected National League for Democracy government, signing more than 40 investment deals under the NLD administration.

China will continue to push ahead with its ambitious Belt and Road Initiative (BRI), which is considered the centrepiece of Xi’s foreign policy. As part of that, China will try to dominate the Indian Ocean, which plays an integral part in both the economic and military objectives of China.

The Kyaukphyu deep-sea port project, which is part of the BRI, was initiated under former President U Thein Sein’s quasi-civilian government. The project faced delays as the NLD, led by Daw Aung San Suu Kyi, attempted to reduce the stake of the Chinese firm primarily responsible for implementing the project. Shortly after the 2021 military takeover, the junta formed a management committee for the project.

China also used its veto to protect Myanmar’s military regime at the United Nations General Assembly. Though there has still not been a face-to-face meeting between Xi and junta chief Min Aung Hlaing in the post-coup period, China has maintained good ties with Myanmar’s generals throughout the two countries’ shared history.

Since mid-2022, China has increasingly engaged with the junta. The Institute for Strategy and Policy – Myanmar highlighted five developments in the China-Myanmar bilateral relationship from August to November.

The first was the inauguration of a direct shipping route linking the new Beibu Gulf Port in China’s Guangxi Province to Myanmar’s commercial capital Yangon. Four ships will run to Yangon every week.

The second: A Chinese diplomat told media after the 20th conference of the Communist Party of China that Beijing would help to achieve peace and national reconciliation in Myanmar, and called for greater efforts for the establishment of the China-Myanmar economic corridor.

The third is cooperation for border stability. The two others are the establishment of an economic zone in Kachin State’s Kanpiketi, at the Chinese border, and providing counter-cybercrime training and refresher training for junta officials.

What I want to highlight here is the fact that, as mentioned above, China has effectively used the arbitrary periods of Myanmar military dictators for economic gain and has always protected the Myanmar military on the international stage, which no one can deny. Even after the military coup in February 2021, China did not stand by the Myanmar people. Now, China will certainly take advantage of Myanmar’s political crisis.

However, China is well aware that the issue of peace in Myanmar is not as simple as it seems, and that it is very difficult to eliminate the military’s desire to dominate Myanmar’s politics.

It is interesting to see how China intends to contribute to Myanmar’s peace and reconciliation. China will not sit back while Western countries interfere in Myanmar’s internal conflicts.

The military council may release the arrested NLD leaders and discuss reconciliation with the political opposition. China cannot discuss the main problem of Myanmar, the construction of a federal state. One thing is that the opinion of the NUG government and Daw Aung San Suu Kyi regarding the military junta’s planned election is of utmost importance. While the People’s Defense Forces (PDFs) operating in the country include hundreds of thousands of fighters, it is interesting to see how effective reconciliation in Myanmar will be with China’s entry into the process.

The Myanmar military has not yet accepted the concept of building a genuine federal union that the ethnic groups want, and NLD leaders have only accepted a democratic federation. Peace through the Nationwide Ceasefire Agreement (NCA) — which the military council is discussing with some ethnic armed groups by amending the 2008 Constitution and building a federal union — is a non-working path, and peace talks with powerless armed groups are just for show.

I see that it is almost certain that China’s clamouring to solve the Myanmar problem is only for its own interests and will not lead to genuine peace and a federal union in the future.