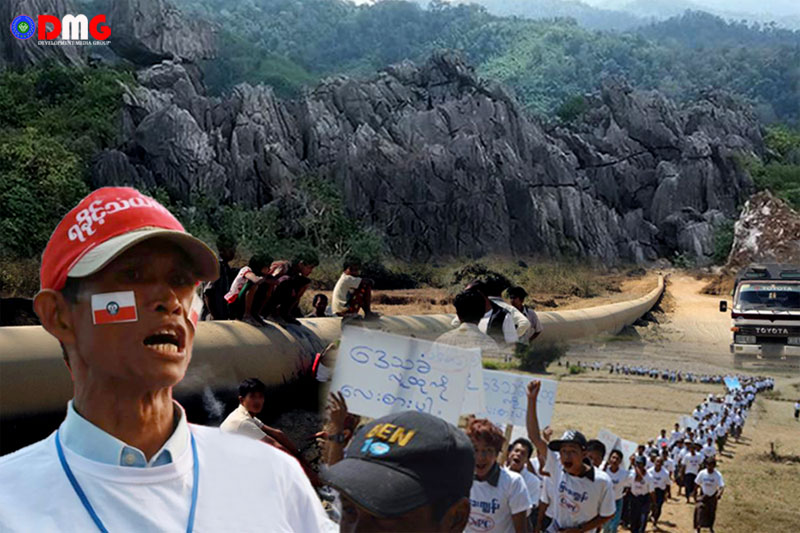 Wedged between the Bay of Bengal and the Arakan Yoma mountain range, Arakan State is rich in forest and marine resources. Myanmar’s westernmost state also possesses rare minerals like titanium, and expensive building materials like marble, which takes hundreds of years to form, as well as large deposits of natural gas — an important resource for many 21st century economies.

Freshwater creeks that originate from the Arakan Yoma mountain range and beyond flow through Arakan State, emptying themselves into the Bay of Bengal. In these places where freshwater and saltwater meet the technical term is estuaries, which are also known as “nurseries of the sea” because many marine creatures lay their eggs there, with the conditions in estuaries highly conducive to supporting young life.

Arakan State’s lengthy coastline supports a majority of livelihoods in the state, which are tied to the fishing/aquaculture and shipping industries. Inland, Arakan State’s fertile soil is relied upon by hundreds of thousands more who farm for a living.

Arakan State also holds geopolitical significance as China, the world’s most populous country and the second largest economy in the world, sees a planned Special Economic Zone (SEZ) and deep-sea port at Kyaukphyu as a sea outlet for its landlocked Yunnan Province. It is similarly important for the “Necklace of Diamonds” strategy of India, which is aimed at counteracting an increasingly assertive Chinese presence in the Indian Ocean.

In other words, Arakan State is considered an important component of both China’s Belt and Road Initiative and India’s Look East Policy.

Despite its enviable natural resources endowment, for decades Arakan State has been plagued by poverty, racial and religious conflicts, and neglect. There are few industries, high unemployment and a lack of market access. These factors have prompted many locals to leave the state for jobs elsewhere in the country or abroad, creating a brain drain that is putting prosperity in Arakan State farther and farther out of reach.

Arakan State is one of the poorest states in Myanmar due to exploitation and discrimination at the hands of successive central governments. Despite billions of dollars worth of foreign investments in Arakan State, locals enjoy few benefits, and promises that these investments will lead to job creation have largely fallen flat. It is no wonder, therefore, that the number of people leaving Arakan State is increasing annually.

The Arakan Army (AA) was founded in Kachin State in 2009, with the stated goal of freeing Arakan State from the yoke of Bamar rule and fighting for self-determination and self-administration for the Arakanese people. The AA established a presence in Arakan State in 2015.

The Myanmar military and Arakan Army engaged in fierce fighting throughout 2019. Pursuing a confederate status for Arakan State, the AA has won the overwhelming support of the Arakanese people. Following a ceasefire reached between the warring sides in 2020, the AA consolidated its control of Arakan State, establishing an administrative network complete with tax offices and a law enforcement apparatus separate and independent from the Bamar-dominated central government.

The Myanmar military still holds a strong presence across Arakan State. The Arakan Army does not yet have its own demarcated territory, in which it has total control. But it has generally been praised by the public for setting up well-functioning administrative and judicial appendages, which run parallel to the junta’s own in most cases. Since the AA introduced its courts in Arakan State, the regime’s judicial system has almost ceased to serve a purpose in some townships.

The Myanmar military and Arakan Army observed a ceasefire starting in November 2020. But by early 2022, there were indications that the truce was fraying. Then, with a handful of clashes in the months leading up to it, fighting resumed in earnest in August of last year.

The Myanmar military became known for firing artillery shells at villages and arbitrarily arresting villagers. The AA seized several junta bases along the Myanmar borders with India and Bangladesh.

The regime then carried out a campaign to pressure civilians in Arakan State, and cut off roads and waterways to block supplies to residents. The two sides signed an informal ceasefire on humanitarian grounds on November 26, 2022.

There are many foreign investments in Arakan State. Among those projects are the Kaladan Multi-Modal Transit Transport Project; the Kyaukphyu deep-sea port project and Special Economic Zone (SEZ); a marble stone production operation at Mt. Naypu; and a hydropower project in Kyaukphyu Township.

Looking at these investments, everyone has known for some time that they are not projects that will provide significant employment opportunities for local residents. The benefits of these projects can only be obtained by local populations if the right to political decision-making is genuinely attained. The union government controls resource extraction projects in Arakan State that generate a lot of foreign income. In particular, revenue from the sale of Arakan State natural gas is helping to prop up the military regime.

The sale of natural gas in Myanmar is the largest source of foreign investment income currently, and in 2020, gas export sales reached US$3.3 billion. Among Myanmar’s four natural gas pipelines, Arakan offshore gas production is the largest, reaching an average of 540 million cubic feet per day. Farther south, Chevron and Total have estimated that the pipeline extracting natural gas from Tanintharyi Region will have to stop production around 2025.

As major international oil companies increase or signal intentions to expand their operations in Arakan offshore gas and oil blocks, it is clear that there is a race on to exploit the natural wealth of Arakan State’s people.

Onshore, the yet-to-be built Kyaukphyu deep-sea port and Special Economic Zone at Kyaukphyu will cost more than US$7 billion, with China having a majority stake in both projects. The final agreement was signed under the National League for Democracy (NLD) government and is now being prepared to be implemented under the military junta.

Meanwhile, the regime plans to restart marble stone production at Mt. Naypu in Taungup Township, Arakan State, which was halted during the NLD government. The marble venture was acquired by Vietnam’s SIMCO Song Joint Stock Company and the contract period will last until 2032. Marble stone production will take place across hundreds of acres. This project will bring no benefits for the Arakanese community and the residents are against it, but the junta late last year announced that it was rebooting the project.

There are still other projects — agreed under the NLD government, its predecessor or junta successor — for which there is no way to conclude that the Arakanese people’s best interests are being served. Projects that do not have the support of Arakan State’s people are a curse for Arakan State’s people; more specifically, they have been and will continue to be a resource curse.