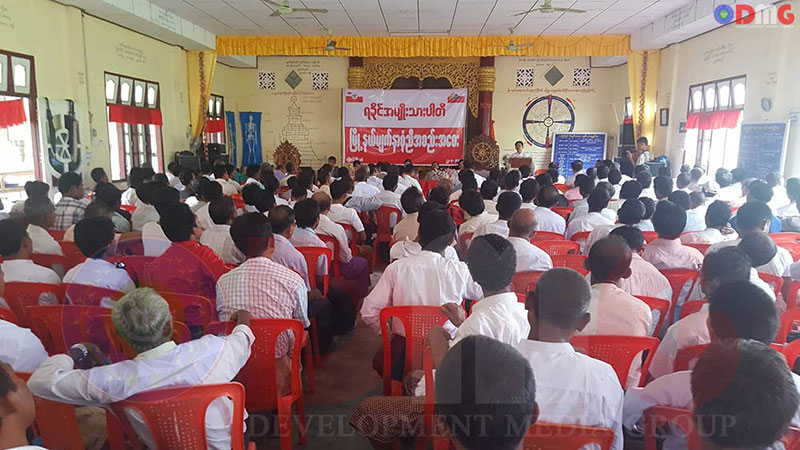 Daw Aye Nu Sein, a senior ANP figure, was offered a seat as a member of the State Administration Council formed by the Myanmar junta. The ANP chairman and members of the party steering committee welcomed and accepted the offer on February 4, three days after the coup. The ANP also asked the SAC for the chairmanship and two members on the Arakan State Administration Council. The ANP also called for the United League of Arakan/Arakan Army (ULA/AA) to be de-designated as a terrorist organisation, as well as demanding the release of all political prisoners and the release of all those unjustly charged under the Counter-Terrorism Law.

At the time, the ANP’s stance was being questioned as political parties across the country protested against the junta. Some senior ANP members even voiced opposition to the party’s stance.

Daw Aye Nu Sein was allowed to join the SAC from its earliest days, but the Myanmar junta did not give the ANP the chairmanship of the Arakan State Administration Council nor any subordinate memberships on the council. A third letter was sent to the SAC on March 12 requesting that the ANP be allowed to join the Arakan State Administration Council.

The ANP issued Statement No. 1/2021 on March 22. The ANP said it would work with any ethnic group that recognises and values the Arakan national interest and would work with the country’s ethnic people to end the military dictatorship. The ANP was “deeply saddened” by the loss of life in the Myanmar military’s brutal crackdowns on innocent civilians protesting for democracy, and urged all those responsible to refrain from further violence, the statement added.

Less than two months later, the ANP formally decided not to work with the junta at its central executive committee meeting on May 4. In an August 12 statement marking International Youth Day, the ANP Youth Wing said that it welcomed the ANP’s decision and called for a clear set of principles and a concerted effort to overthrow the dictatorship, and promote national equality and self-determination.

Some of those who disliked the ANP’s position and policies resigned following the coup. A member of the ANP’s policy steering committee, two central committee members and two candidates who contested the 2020 general elections were among those who left the ANP in the aftermath of the military takeover.

U Pe Than, a senior member of the ANP leadership, said party politics had stopped working after Myanmar’s military coup.

At this time, people are not interested in party politics. But that does not mean the role of politicians is gone. Politicians must help the needs of internally displaced people (IDPs) who have yet to return home, and continue to fight for the release of the unjustly detained in Arakan State. Politicians must constantly monitor and criticise the actions of the regime. But it is ugly that the parties are fighting each other. This has led to the belief that party politics can no longer help the Arakanese people.

At this time, the Arakanese people believe that they have an organisation that will stand in front of them and lead all the people. It is not a registered political party, however, and I refer rather to the United League of Arakan/Arakan Army (ULA/AA). In other words: For now, it seems the growing influence of the ULA/AA is coming at the expense of a fading Arakanese party politics.