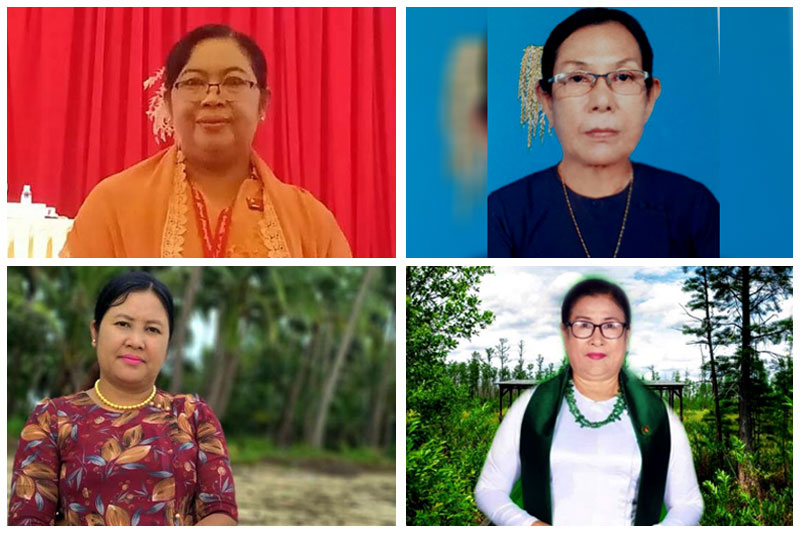 Women’s representation in parliament remains far below the 50:50 ratio that gender equality advocates point to as the ultimate goal. Still, more women in Arakan State are contesting the November 8 general election than did in 2015, which was itself a historic year for female candidates in Myanmar.

DMG reporter Khin Tharaphy Oo recently interviewed several women contesting the 2020 election in Arakan State about why they decided to run, the challenges they are facing in this highly unconventional election year, and what they will prioritise if they win.

Even though I am not a lawmaker at the moment, I revealed the truth about three rape cases in Myebon Township. I have also provided help for farmers who did not get land-use rights. I will continue to help them.

This election is not the same as in 2015 because of the COVID-19 outbreak and civil war. The election campaign has already started, but the district election subcommissions have instructed not to do election campaigns in areas where stay-at-home orders are imposed.

There is little regional stability and transportation is poor in Arakan State, but I do not know exactly what the election subcommission will do to make sure there is security for election candidates.

I think if I am a lawmaker, I can more effectively work for the development of people than if I am outside the Parliament. That’s why I decided to stand for election. I will work for Arakanese people to restore human dignity.

The main issue I need to take on is to end war and build peace. I will try as much as I can to develop our Arakan State systematically. And in Parliament, I will fight for adopting a federal system so that Arakan State can get some share of natural resources from our state. As a new face female lawmaker, I will reform what needs to be reformed by taking lessons from the experience of the previous parliamentary terms. I will work to develop Arakan State.

As a female Pyithu Hluttaw lawmaker, I will work as a role model for women’s participation in politics and to keep the voices of women from being covered up.

But for me, there are not many challenges because I am a teacher, a resident and a participant in charitable works in the community.

The main motivation for contesting the election is to ensure people enjoy justice. People’s farmland was confiscated and has not been returned. I want to work for farmers. Another problem is joblessness. Residents of Arakan State are suffering poverty. I will try my best to eliminate poverty and to get job opportunities in the state.

There are some cases that women can solve that men haven’t been able to tackle. So, I want more women involved in politics. I have plans to bring more women to Parliament.

I am not facing challenges so far. A good part about being a member of the ALD, which was formed in 1988, is that the party has a good image and the support of people.

We cannot directly meet with people. It is a difficulty we are facing in the election campaign. If we use online [campaign strategies], most residents are not good with technology. Most of them do not use phones. It is a major challenge for me to do an election campaign.

Before I was a teacher, I was a member of the Union Solidarity and Development Party. When I retired, my seniors in the party proposed me to be an election candidate. I did not refuse because I want to become a candidate to work for people. There are policies set by the Union Solidarity and Development Party. I will implement the policies that are suitable for our region to see development for the people.

The selling point of the Union Solidarity and Development Party is that it is a strong and united team. It is not an organisation that was formed recently.