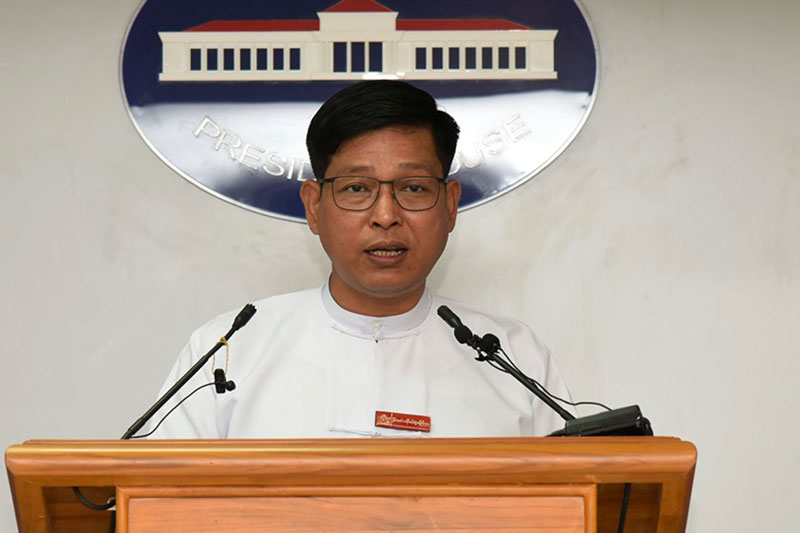 Despite fierce fighting in recent months between the military and Arakan Army, the door is still open for the latter to come to the table for a peace dialogue addressing the ethnic armed group’s grievances, President Office spokesperson U Zaw Htay said on February 21.

“The problems in the state cannot be solved by shutting them [the AA] out. We have examples of such problems from the events that have transpired over more than 70 years,” said U Zaw Htay, speaking during a news conference at the Presidential Palace in Nay Pyi Taw.

The government had arranged to meet representatives of the four ethnic armed groups that make up the Northern Alliance, including the AA, for peace talks in China during the second week of February, he said, but the plan was scrapped due to the coronavirus outbreak in China.

AA spokesperson Khaing Thukha said the government needed to openly show its plan to establish a federal system, adding that peace could be established only if political problems were resolved fairly.

“Especially, the Myanmar military needs to stop its current offensive war using mass force. How the government will guarantee national equality and self-determination, which is the current political problem, is an important question,” he said.

U Hla Thein Aung, an Arakan State lawmaker for Minbya Township, said he was hopeful that peace talks between the government and AA might produce positive results, despite previous dialogues yielding little.

“Talks between them have been made for a long time, but nothing has happened so far. But their meetings were in good faith. We want them to arrive at good outcomes,” he said.

The Tatmadaw and AA have been fighting in Arakan State since the end of 2018, with the number of civilians displaced by the conflict surpassing 100,000. Additionally, over 130 civilians have been killed and more than 360 were injured, according to the Arakan Students’ Union (Universities – Yangon).