Hot and crowded camps are fever-inducing for some IDP children 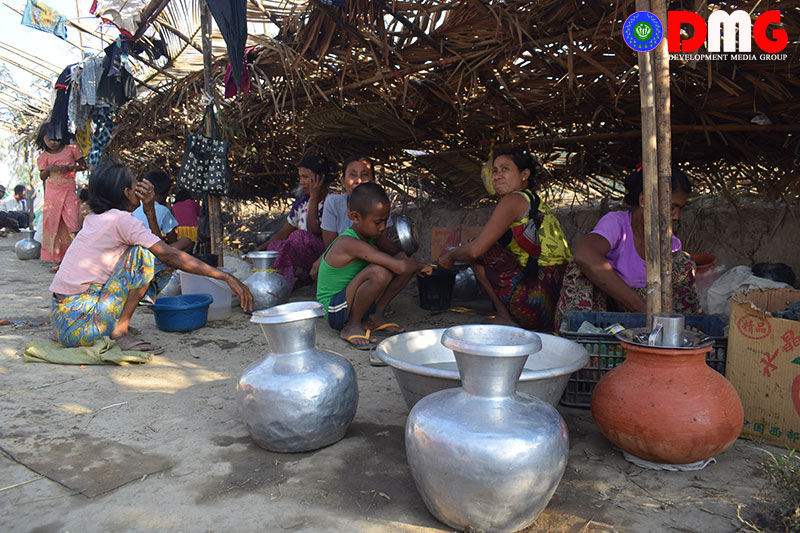 Some children taking shelter at camps for internally displaced people (IDPs) in Rathedaung Township are suffering from fever amid cramped living quarters and as seasonal temperatures move toward their hottest annual averages, according to IDPs.

The difficult conditions are a cause of illness for some, said Daw Yin Than, a displaced person; often IDP families are living within minimal confines that leave much to be desired.

“The families, including children, are uncomfortable at the camp. Rooms are roofed with tarpaulin sheets and floored with pieces of straw. Moreover, we live near the entrance [of the camp], so dust leads to my child whenever motorcycles and trishaw motorcycles pass here,” she explained.

Staffers from the Public Health Department provide healthcare services to IDP camp inhabitants in Rathedaung Township once a week. Beyond this, there are clinics where medical treatment is provided, but many cannot afford this option, IDPs say.

Many children from IDP camps including the Shwe Parami settlement in Rathedaung Township are suffering from cough, dysentery and diarrhea due to unclean drinking water and hot weather, according to the refugees.

Conflict between the military and the Arakan Army (AA) has forced more than 120,000 people to shelter at IDP camps in Arakan State, where they struggle to meet basic needs such as food, healthcare and education