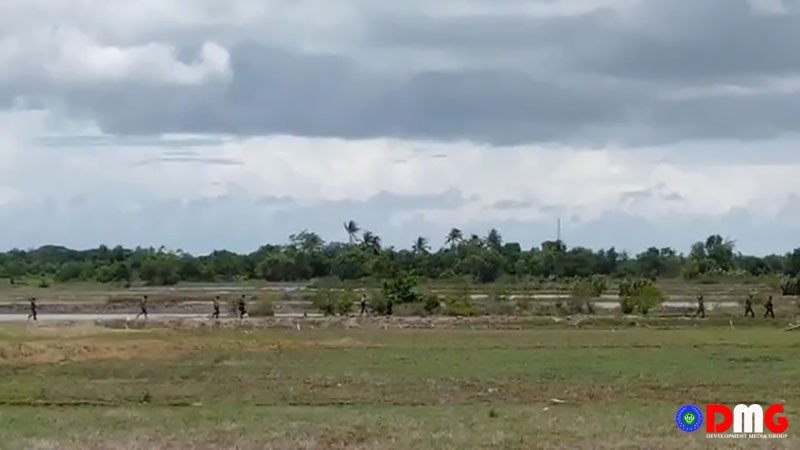 The military has launched what were described as “counter-terrorism operations” against the Arakan Army near Kyauktan, Hteeswel and Aung Thazi villages in Rathedaung Township, Arakan State.

The military alleges that the Arakan Army used villagers as human shields in the area and blocked routes linking Rathedaung town, Kyauktan and Phone Nyo Leik villages with Buthidaung Township.

Military personnel have been conducting the so-called counter-terrorism operations against the ethnic armed organisation in order to open the blocked routes and rescue civilians, the Tatmadaw True News Information Team said on July 16.

Fierce hostilities occurred between the military and the ethnic armed group at a location between Kyauktan and Aung Thazi villages on July 16-17 and artillery shells landed in the area on July 18, the Kyauktan village administrator U Aung Thaung Shwe told DMG.

“The military opened artillery shell fire from Rathedaung and Hteeswel village on July 18 because Arakan Army troops were stationed in Aung Thazi village. No confrontation erupted between the military and AA on July 18,” he added.

No one reportedly remains in Hteeswel and Aung Thazi villages.

Already last month, residents from Kyauktan village and its environs began seeking refuge at safer locations in Rathedaung and Sittwe after a letter signed by the Arakan State minister for Security and Border Affairs on June 23 urged them to leave their homes as the military prepared to launch what it described at the time as “clearance operations” against the Arakan Army. The military withdrew the letter on July 6 but instead began what were characterised as “counter-terrorism operations.”

Some residents remained in the Kyauktan vicinity to plough their farmlands, and military attack helicopters conducted airstrikes near the village on July 16, residents said. Three men ploughing their farmlands were wounded by shrapnel, Kyauktan village administrator U Aung Thaung Shwe told DMG.

The three men are receiving medical treatment, residents said, and their conditions are not considered life-threatening.