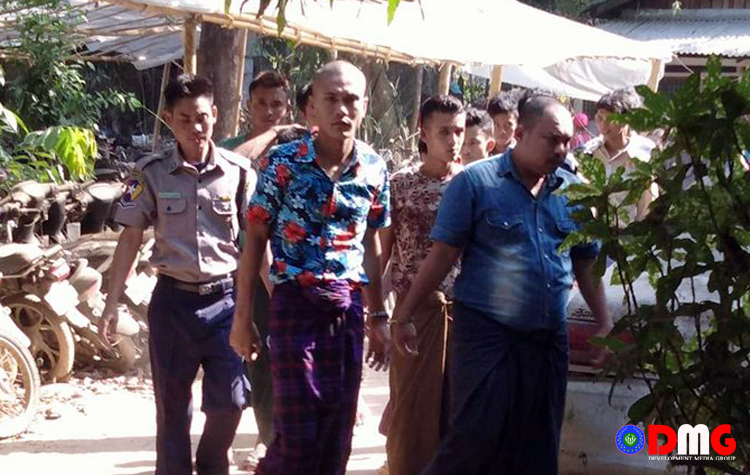 Three out of four people who were sentenced to two years in prison under the Unlawful Associations Act for the circulation and sale of a calendar that ruffled feathers last year in Ayeyarwady Region were released early and walked free on July 27.

Said Daw Phyu Phyu Than, the mother of Ko Kaung Myat Thu, one of the men released: “Currently, I want to say nothing. It is said to be lucky that my son was released. I feel really tired due to worries and grief.”

In addition to her son, Ko Bo Hsan and Ko Win Bo were also released on Monday. Police detained the three men as well as the publisher of the Rakhita calendar, Ko Thein Aung Myat, on April 6, 2019, while they were selling them on Haigyi Island.

The foursome were sentenced to two years in prison each by the Ngapudaw Township Court in Ayeyawady Region on November 18, 2019, under Section 17(1) of the Unlawful Associations Act because “Arakan Army Day” was a noted date on the calendars.

Ko Thein Aung Myat was said to have taken the lead role in peddling the calendars, while the other three men were accompanying him on the day of their arrests.

Ko Kaung Myat Thu told DMG: “I was not satisfied with the court’s verdict as I have nothing to do with the case. I want to put blame on the judiciary.”

Ko Thein Aung Myat was sentenced to two years in prison under the Unlawful Associations Act and faced additional prosecution on law provisions pertaining to illegal publication. He was not included on the list of those released this week.

Daw Moe Thanda, the wife of Ko Thein Aung Myat, said: “Three people and my husband got two-year prison sentences each. As my husband was sentenced to 2.5 years in prison, he is still in the prison.”