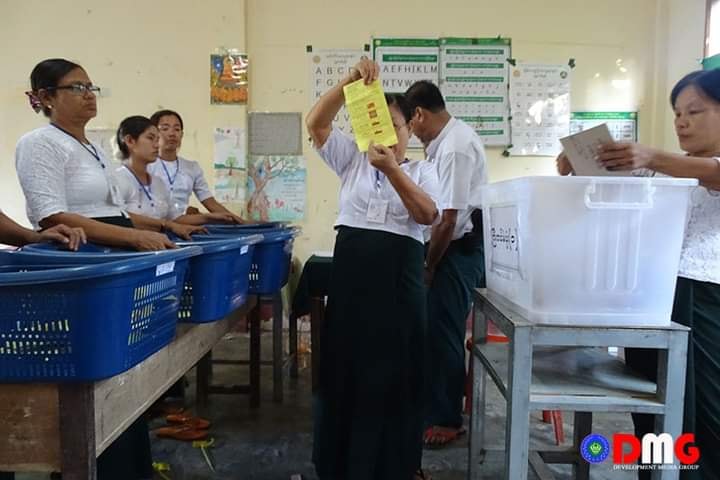 Sixty-eight out of 2,596 polling stations scheduled to be set up in Arakan State for the upcoming 2020 general election will be arranged for security personnel and their families, according to the Arakan State election subcommission.

There will be 12 polling places for police officers and 56 for military personnel and their families, said U Thurein Htut, secretary of the Arakan State election subcommission.

There are approximately 1,640,000 eligible voters in Arakan State.

It is not yet possible to know the precise breakdown of voters by polling location as voter list verification is ongoing among both the civilian population and for military personnel and their families, U Thurein Htut added.

“We don’t have an accurate voter list for military personnel and their families. It is difficult to say exactly about it,” he said.

Polling stations for military personnel and their families were set up inside military compounds for the 2015 general election, but the booths will largely be located outside military barracks for this year’s vote, the Union Election Commission has said.

The placement of polling locations within military compounds has long been criticised by election monitors and political parties as lacking transparency and fostering a sense of coercion among voters in those locations.

Polling stations would still be set up inside military bases in some areas for security reasons, Brig-Gen Zaw Min Tun, secretary of the Tatmadaw True News Information Team, said at a press conference on July 23.

Preliminary lists of eligible voters could not be publicly posted in 36 villages across five townships in northern Arakan State, according to the state’s election subcommission.

Election officials were unable to post those voter lists in Buthidaung, Kyauktaw, Mrauk-U, Minbya and Ann townships because some villages there have been all but abandoned while others were destroyed by ongoing conflict between the military and Arakan Army.

Last month the Union Election Commission announced that the 2020 general election would be held on November 8.