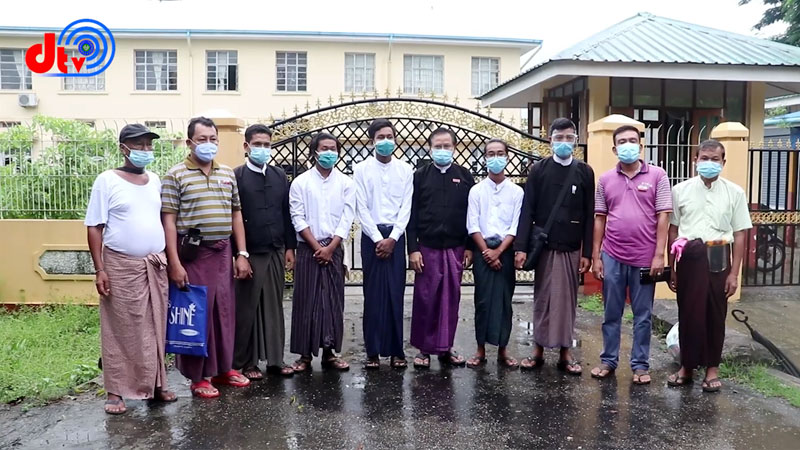 Three Arakanese student leaders detained over an anti-government protest earlier this month will be charged under the Peaceful Assembly Law in a legal change from earlier indications that they would be prosecuted using the Natural Disaster Management Law.

The three students were arrested during a demonstration on September 9 outside the Arakan State government offices, where they were demanding the restoration of internet access and an end to human rights abuses in Arakan State.

They were remanded until September 24 under Section 25 of the Natural Disaster Management Law, but the lawsuit was changed at the Sittwe Township Court on September 22 as it was determined that the legislation was not appropriate for the circumstances.

Section 19 of the Peaceful Assembly and Peaceful Procession Law covers a requirement to inform authorities in advance of a planned demonstration.

“The section under which to prosecute them was changed according to the recommendation of the legal office,” said U Kyaw Nyunt Maung, a lawyer for the students — Ko Toe Toe Aung, chair of the Sittwe University Students’ Union, and information officers Ko Kyaw Naing Htay and Ko Oo Than Naing of the Arakan Students’ Union and Sittwe University for Computer Studies respectively.

Section 19 allows for bail, and the trio were released with their trial’s first hearing scheduled for October 6.

Members of student unions in Yangon, Mandalay and Meiktila have also faced charges for protesting against human rights abuses in Arakan State. Cases have been opened against some 20 students under various legal statutes including at least one charge of incitement.

“We thank our alliance students who support us. We want to urge them to keep trying together in the future,” said Ko Kyaw Naing Htay, information officer for the Arakan Students’ Union.