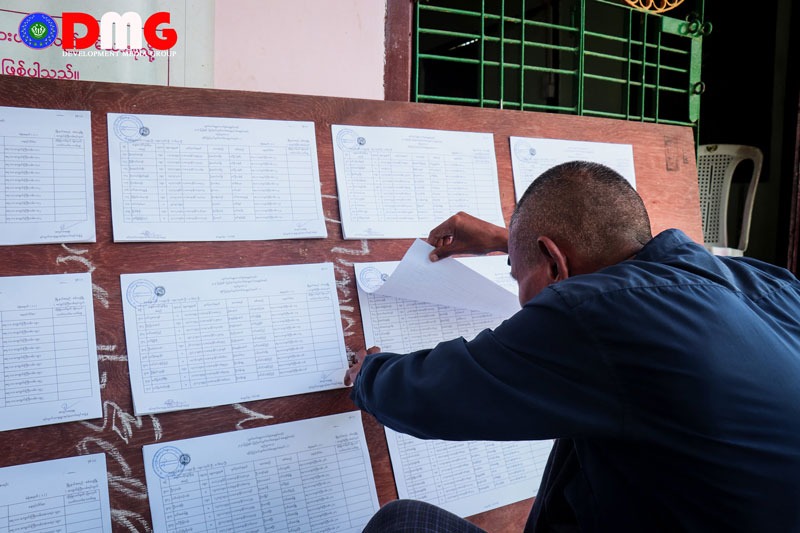 Voter lists in Aungzigone Village, Rathedaung Township, were damaged this week by shrapnel from an artillery shell allegedly fired by the Tatmadaw, according to U Oo Kyaw Thein, the village administrator.

The voter lists, posted within the compound of a monastery in Aungzigone, were destroyed when artillery shells fired from a military vessel in the Mayu River fell in the village on the morning of October 6, the village administrator added.

The damaged voter lists were posted in the monastery next to a crowded IDP camp. The lists were posted there so that 838 eligible voters from Aungzigone and Saphokyun villages could easily check their names, U Oo Kyaw Thein said.

DMG contacted the Rathedaung Township election subcommission for comment on the shelling, but an official said they had yet to be informed of the incident.

There are two polling stations in the Pyin Shay village-tract, one in Aungzigone village and the other serving the villages of Kanpyin and Pyinwun.

“As fighting between the Tatmadaw and the Arakan Army intensifies in Arakan State, the election commission needs to re-post the voter list,” said U Khaing Kaung San, director of an Arakan State election monitoring group. “On the other hand, there is a concern about security during the upcoming general election.”

Locals have accused a Tatmadaw watercraft in the Mayu River of launching heavy weapons without any hostilities reported in its vicinity, damaging or destroying 17 homes, two monasteries and one other religious building, and injuring some civilians in Pyin Shay village-tract.

DMG phoned Maj-Gen Zaw Min Tun and Brig-Gen Ye Yint Aung from the Tatmadaw True News Information Team seeking comment on the locals’ allegations, but they could not be reached.