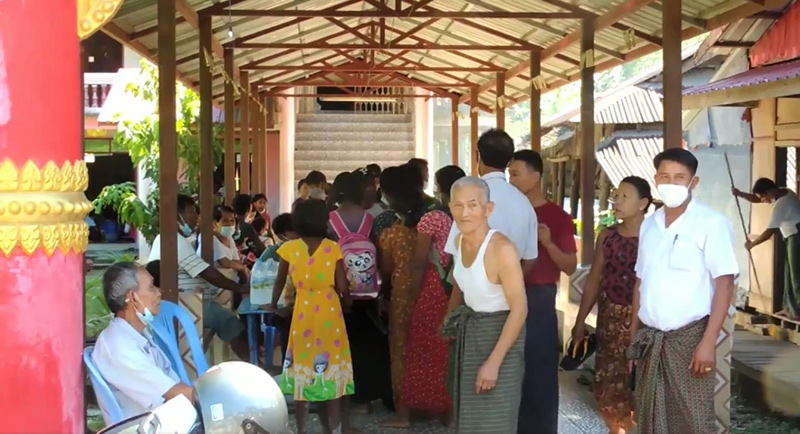 Hundreds of people from Zaichaung village in Kyaukphyu Township, Arakan State, have fled their homes as the military has carried out sweeping interrogations of local residents.

More than 700 villagers from Zaichaung have fled to downtown Kyaukphyu and nearby villages after troops entered the village and began questioning locals on November 2.

A woman from Zaichaung is receiving treatment at Kyaukphyu Hospital after being shot by the Tatmadaw, locals said.

“Soldiers entered the village and arrested all residents on sight. Locals fled their homes for fear of being arrested by the Tatmadaw. I had to flee along with others while I was harvesting paddy,” said Daw Phru Daung Ma, a resident of Zaichaung.

Some villagers were unable to flee and are currently being detained in the village, according to those who sought safety in downtown Kyaukphyu.

“My relatives are being detained in the village and about half of the villagers escaped. Some locals fled to downtown Kyaukphyu while some people are still being held in the village. We are unable to contact the detainees in the village,” said Ma Shwe Nu, a Zaichaung resident.

DMG attempts to contact those trapped in the village to find out the situation in Zaichaung were unsuccessful.

In a statement on November 6, the Kyaukphyu Rural Development Association said the Tatmadaw should refrain from actions that could intimidate people if the military deemed it necessary to conduct interrogations of villagers.

Ko Tun Kyi, a member of the association, said human rights should be fully respected in the region.

“There have been many human rights violations in Kyaukphyu Township during these one or two days. I think the actions taken by the military go far beyond human rights standards. I would like to ask the military to abide by the law,” he added.

DMG phoned officials from the Tatmadaw True News Information Team for comment on the interrogations of Zaichaung villagers, but they could not be reached.

In addition to a recent landmine blast, several civilians have been arrested on suspicion of having ties to the Arakan Army in Kyaukphyu Township, despite it being a relatively conflict-free part of Arakan State. Prior to the displacements from Zaichaung, the Rakhine Ethnics Congress said there were 236,229 internally displaced people (IDPs) as of November 2.