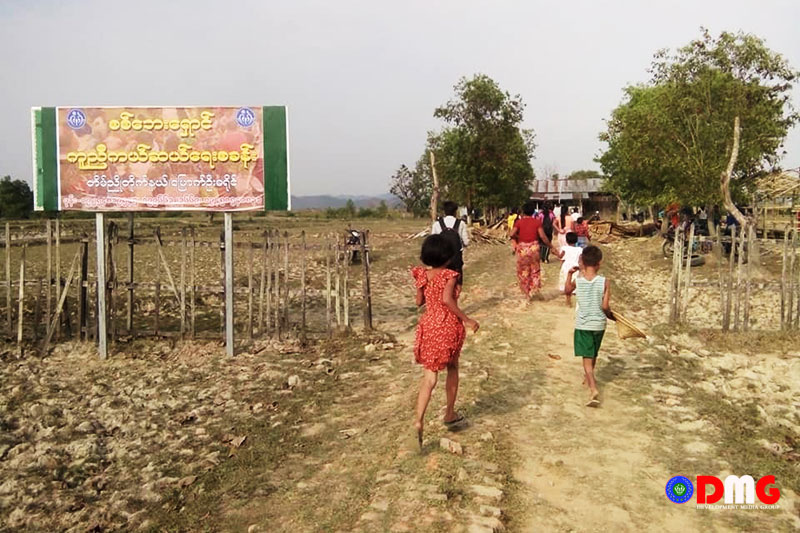 Myanmar military personnel have allegedly made off with about 600 rice sacks provided by the government for displaced people in Tin Nyo village, Mrauk-U Township.

The rice sacks were supplied by the Mrauk-U District Disaster Management Department for some 3,000 internally displaced people (IDPs) at the IDP camp situated adjacent to Tin Nyo village, and were being temporarily kept at the village monastery, village administrator U Wai Hla Aung told DMG.

“The rice should have been distributed on November 2 to displaced persons. But we could not distribute them to the IDPs yet because soldiers were staying in our village. At around 7 a.m. this morning, they took the rice from the monastery in a truck,” he said on Tuesday.

Many local residents have fled their homes since government troops arrived at Tin Nyo village, and only elderly residents remain, said a local villager who asked for anonymity.

“Tatmadaw soldiers are stationed in Tin Nyo village, and almost all the villagers have fled because some were killed in previous cases,” he told DMG.

The Mrauk-U Disaster Management Department provided 1,023 sacks of rice to IDPs at the Tin Nyo camp for October’s rations, said an official from the department.

“We heard that military personnel took the rice, but we don’t know details. There is no internet access,” he said.

More than 3,000 people displaced from some 875 households are sheltering at the camp in Tin Nyo. DMG attempts to contact Mrauk-U Township lawmaker U Tun Tha Sein and military spokesman Brigadier-General Ye Yint Aung for comment were unsuccessful.