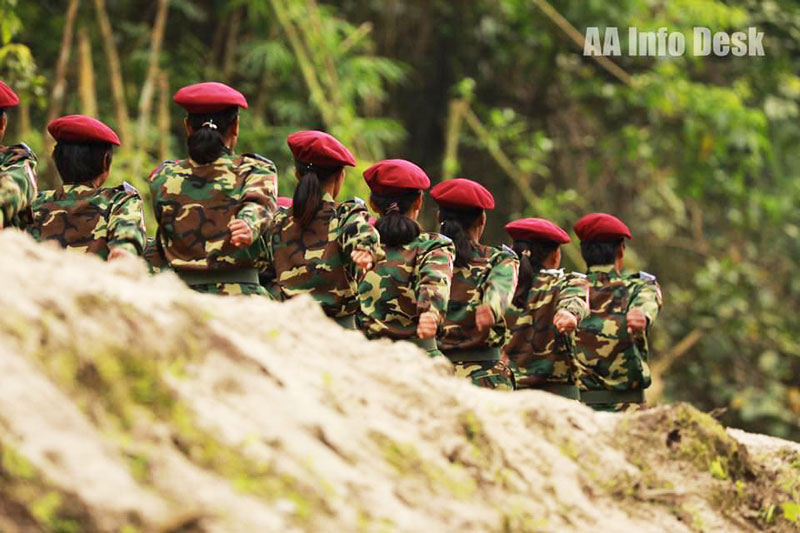 The Arakan State Hluttaw on Thursday approved a motion to remove the Arakan Army (AA) from being designated a terrorist organisation in order to build lasting peace.

A proposal urging the Union government to rescind the designation of the United League of Arakan/Arakan Army as terrorist groups to achieve peace was submitted to the Arakan State parliament on January 11.

The designation of the Arakan Army as a terrorist group was an obstacle to equal participation at the negotiating table to discuss eternal peace and the establishment of a federal democratic union, said U Tun Thar Sein, the lawmaker for Mrauk-U Township who put forward the proposal.

U Tun Thar Sein’s motion was seconded by seven legislators and was approved by the Arakan State legislature on January 14 as there were no objections.

U Hla Thein Aung, an Arakan State MP for Minbya Township, said the Tatmadaw and the Arakan Army needed to hold talks to improve the status quo, and that the AA should thus be removed from being classified as a terrorist group.

“If the designation as a terrorist organisation is not removed, we will not be able to hold talks as far as we would like to think. If there is no one above the law, the discussions between the Tatmadaw and Arakan Army online are, frankly, against the law. Therefore, it is necessary to rescind the designation of the Arakan Army as a terrorist group so that those who will discuss can work legally in accordance with the law,” the Minbya lawmaker said.

The power to designate or de-designate a terrorist entity was a governmental power, said U Zaw Zaw Myint, an Arakan State MP for Buthidaung Township, who added that the government should take action to withdraw the Arakan Army from its list of terrorist organisations.

Security issues would be key to rescinding the declaration of the Arakan Army as a terrorist organisation, NLD spokesman Dr. Myo Nyunt told DMG recently, adding that the Union government would take it into consideration alongside input from the Tatmadaw, which is responsible for the nation’s security.

U Aung Win, an Arakan State assemblyman from Myebon Township, said it is important for Myanmar to move toward a federal democratic union, end the civil war and bring about peace talks as soon as possible.

“It is crucial for peace talks to emerge soon to end the civil war. It is very important that the ULA/AA be declared [no longer] a terrorist organisation so that it can move beyond the roundtable of free dialogue and peace,” he said.

Despite a tense military situation between the Tatmadaw and the AA in Arakan State for most of the past two years, the gunfire has ceased for more than two months, in the wake of Myanmar’s November 8 general election.

Leaders of the two groups have held three rounds of talks since the Tatmadaw welcomed the AA’s call last year for make-up elections in cancelled Arakan State constituencies.